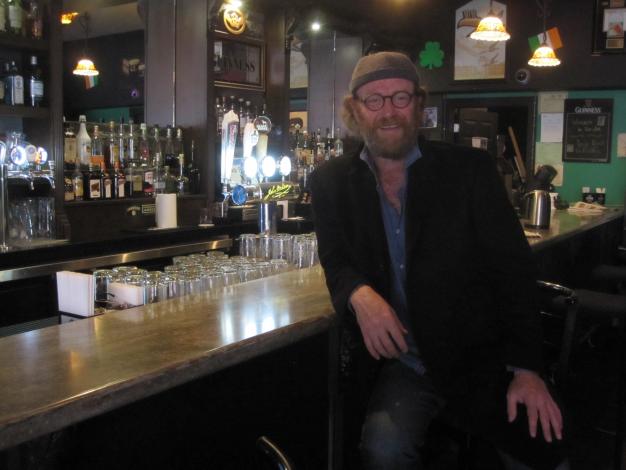 For the past 24 years, Chris Andrews and Mark Hiscock have been making beautiful music together. The duo became musical collaborators by accident when they were double booked at a local pub. Instead of cancelling one of the performances, the proprietor suggested they play together and the rest, as they say, is history.
Over two decades later, Shanneyganock (which currently consists of Chris, Mark, Chris Donnelly and Ian Chipman) has earned a reputation as one of Newfoundland and Labrador’s best party bands - and for good reason. It’s hard not to crack a smile and tap your toes while listening to their tunes. On June 15, Shanneyganock released their newest album, Home In My Harbour, and this summer, they’re taking their show on the road, appearing at Squid Fest in Holyrood July 15; the George Street Festival in St. John’s August 1; and the Festival of Friends in Outer Cove August 13, along with other performances throughout the summer and fall. Downhome met up with frontman Chris Andrews at Erin’s Pub (which he runs with Bob Hallett of Great Big Sea fame) in downtown St. John’s to talk about the new release, cruising through life, and the awesome power of music and friends.

Downhome: The new album is called Home In My Harbour, which evokes warm and cosy imagery, and the songs are as rollicking as usual, but you’ve got some touching ones in there, too. What kind of feel were you going for with the new album?

Chris Andrews: The whole theme of this was a feel good, downhome, Newfoundland kind of album with that East Coast feel - happy songs…but a couple of old school tear jerkers. We write some of our own stuff but a lot of it, as a trad band, is to take different music and change it up; hopefully, it gets another spell. [The album] is made for people to have a little fun…whether you’re in the shed or in the car driving. It’s been rough here lately for everybody. Everything has changed. And it’s just sort of, hey, you know, don’t forget we’ve still got ’er scald. It’s time for a fun album to come out.

DH: Included on this album is “One More Will Stand,” which you wrote for the 100th anniversary of the Battle of Beaumont-Hamel last year. What was the experience like of writing that song? Obviously, it’s quite different from your other tunes.

CA: It is, and it was recorded at a different time. It was actually recorded at CBC Studio F last year and then it was added on to the record. That was some of the most pressure I’ve ever felt in my life, was writing that song. Because we asked for people to give their stories and it was so overwhelming. I got hundreds, it was unreal…and people liked it, in general. We were on tour, we were walking into gas stations and stuff and people were clapping. It was really nice...I couldn’t tell everybody’s story. The best thing was to tell what actually happened, and that’s what I did.

DH: Your music video for “Music & Friends,” featuring the legendary Bud Davidge of Simani, blew up the Internet when you released it. How did that collaboration come about and what was it like performing with a Newfoundland musical icon?
CA: Bud is pure class. He’s just one of those guys. He’s excellent, it’s great to be around him. The first time I ever met him was [when] we did this O’Brien’s Music store benefit a few years ago...and Bud came in and sang for that. It was the first time he sang in a long while and Shanneyganock backed him up and Alan Doyle was on stage. It was great. It was a laugh; it was wicked. And we said, we gotta do this again. And Mark and Bud are very tight and Bud’s Mark’s hero, more or less. So it was a great opportunity for Mark, and Bud really enjoyed it. We all enjoyed it. It was just fun.

DH: I read that the video received over 410,000 Facebook views within the first week, and thousands of shares. Did you expect that kind of reaction?
CA: I didn’t know what to expect, because I’m not really Internet savvy. I don’t pay a lot of attention to it or anything. I expected people to like it. I didn’t think it was going to go like that. There’s been no negativity, it’s all positive, positive, positive…Everybody’s a bit down, and we’ve got a lot of s--- on the go, there’s no doubt about it. But we’ve still got it pretty good, and we’ve still got a lot of things - we’ve got family, we’ve got friends, we got music, we got ourselves.

DH: This past April, Shanneyganock headlined the Downhome Music & Friends Caribbean Cruise - something which you’ll be doing again in February 2018. What was that experience like, and do you have any favourite moments from that trip?

CA: So many things stick out. I was very apprehensive about anything to do with cruises in the first place. When we’ve been asked to do cruises before, we always declined. But the Downhome...I just knew it’d be okay, so I went with it. And am I ever glad I did because it ended up being excellent. It was a really enjoyable trip and I got to meet so many different people and the weather was perfect. It was a lot of fun and people were great...we’re looking forward to the next one.

DH: Is there anything else you want people to know about the new album, or anything at all really?

CA: We just want to thank people in general. We feel so lucky to be still able to do this [for] this long, and still getting a great response from the audience, and just sort of finding our little niche in culture in Newfoundland and Labrador. We just want to have our little place and continue on and make music…we’re very proud to be able to do that and very thankful. When you’re together 22 years and you’re 45 years old and you’re making music this long - this album, you know, it was still me and Mark, and Billy Sutton [former drummer] and Craig Young [guitarist/frequent collaborator], and Ian was in, and Patrick Moran, who I’ve been playing with since I was 16 years old. It’s still the same guys, still doing the same things. [We’re] very lucky. - By Linda Browne