A Wild Ride on the Rapids 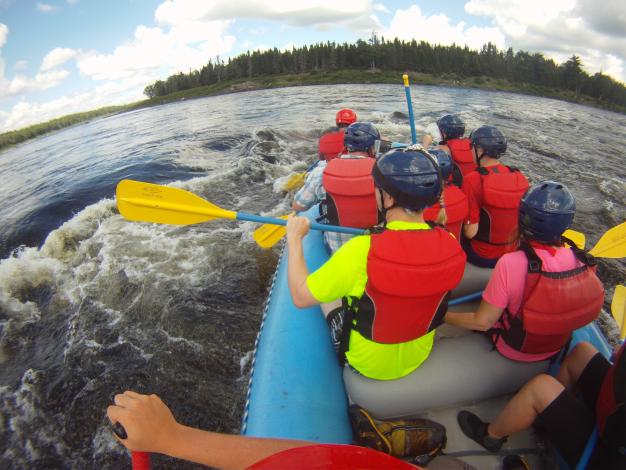 The roller coaster ride into the maelstrom of whitewater begins with disconcerting deception. It is little more than an increase in ambient noise, the slight rumble of a ghost train chugging down a long abandoned track just at the edge of your senses. There is the slight dip in temperature as the moisture-soaked air is tossed up by volatile liquid bashing amongst boulders, some bigger than bungalows. There is the subtle change in aroma and taste of the air felt in the nose, mouth and lungs as the bridal veil mist carries the river scents towards the sky.

By the time the eyes glance up from the constant downward strokes of the paddle and see the enraged eggbeater broiling waters waiting to engulf you, it is far too late to do anything except hold on for dear life. The waves sweep over you, soaking everything, the bottom drops out of your stomach for a second in a downward plunge and then you are over the rapids and shot beyond to foamy pools where all is comparatively peaceful. There is huge collective whooping and paddles raised in high fives and all aboard can’t wait to run the next section. A teenager seated behind me declares enthusiastically, “This is wicked, buddy!”
~

That trip last summer was my first with Rafting Newfoundland, an operation based out of Riverfront Chalets, approximately 20 kilometres west of Grand Falls-Windsor on the Trans Canada Highway at Aspen Brook. Our group travelled by bus with our rafts and gear upriver to the launch point for the most popular tour offering known as the “Badger Chute.”

After our five-hour excursion down 14 kilometres of river, I got a chance to chat with Alex Lowman, our experienced 20-year-old guide. Originally from Osgoode, Ontario, a farming town south of Ottawa, he seemed completely at home on the Exploits River in Central Newfoundland. I soon figured out why.
“Along with several of the other guides this summer, I am enrolled in an Outdoor Adventure Guiding two-year diploma program at Algonquin College in Ontario. I have completed the first year and return to school in September. We did training on the Ottawa River, the Rouge River, Gatineau River and the [Class Four Rapids] of the Jacques River, so we all have a lot of experience on the water,” Alex explained.

In addition, Rafting Newfoundland offers its own four-day training camp in the summers. The hands-on course covers how to guide a raft, as well as crucial safety and rescue techniques for swift water paddle sports. Even if you don’t want a career as a guide, it could be of use to anyone who spends substantial time on or near rivers.

There are six difficulty levels of river rapids, as defined by American Whitewater (a non-profit organization dedicated to the preservation and enjoyment of natural waterways) and internationally recognized since the 1950s. The levels range from Class 1 Rapids (easiest) to Class 6 Rapids (the most extreme and dangerous that should not be attempted). Our Badger Chute tour along a small section of the 246-kilometre Exploits River (the longest river on the island of Newfoundland) took us through, at its most challenging, Class Three rapids. According to Alex, kayakers named this section a long time ago after the town of Badger, which is set along the banks of the Exploits River. “Basically it is a narrow chute through two rocks where all this mass of water that drains one-third of the island of Newfoundland funnels down to a tiny spot and creates a big wave.”
Alex added, “‘Rose’s Roost’ is another excellent location, named after Paul and Joy Rose who originally founded the [rafting] company 20 years ago. This was a favourite spot on the river to hang out or ‘roost and surf’ in the currents. In easy terms, surfing can happen where upstream and downstream currents meet and are fighting each other. There is a sweet spot of sorts created in the middle where you can roost. What the rafting guide and paddlers try to do is take turns riding the upstream current in and play around in there and get wet. It is a lot of fun and kids and folks of all ages love it and think it is awesome. Some of the expressions on waterproof camera photos are priceless.”

For a more technically challenging ride in the future, I’m told the company is looking at an area near Grand Falls called “The Canyon.” Alex said, “It is around a Class Three Rapids all the way, so instead of this more family friendly day-long outing we enjoyed [today], where it is broken up by lots of nice places to swim and quieter sections of river, The Canyon would be about an hour-and-a-half to two-hour run. This would be full-on, going through Class Three whitewater rapids for more experienced paddlers and a lot of fun.”
Alex estimated they guide about 2,000 visitors every season, from May to October, from age five (with a guardian) and up. There is no such thing as “too old” for a rafting adventure, as long as you’re fairly fit. Seniors even get a discount! Tours generally go regardless of weather and are usually not affected by rain since, as Alex said, “You are guaranteed to get wet on a whitewater raft anyway, so why worry about a few rain drops?”

My day with Rafting Newfoundland swept by and before I knew it my adventure was over. But what memories I have! We lunched upon an island of rocks mid-river under the warm sun, swam in the calm steadies, and sighted eagles and other wildlife. We talked of the Beothuk Indians and the hunters, trappers, loggers and salmon anglers who loved this waterway in the past, and had good-natured water fights with rival rafts. Mostly we drifted along sharing stories with fellow paddlers, as if we were  modern-day Huckleberry Finns under the unobstructed mantle of summer sky.

Our tour concluded where it began, back at Riverfront Chalets. Almost anyone with a reasonable level of
preparedness, physical fitness and positive attitude, accompanied by professional guides, could do it. Don’t try it alone - do it safely and with experienced leadership, and it will surely be a day of mighty exploits. - Story and photos by Dennis Flynn