Sitting in the deceptively beautiful interior of the Prince of Wales Loyal Orange Lodge in Cupids, Newfoundland, on a cold April night, the warmth of summer seems a long ways off. Five men have assembled in this historic building to share with me, and with each other, their favourite memories of Bay Wheels. Having endured for three decades, the car show (held each June in the Bay Arena in nearby Bay Roberts) is one of the longest running and most popular events of its kind in the province.

As they pass around posters and paper snapshots pulled with care from file folders, their faces light up with recognition of special memories, machines and moments.
“We made it a ‘Wheels’ show. If whatever you were driving had wheels and you liked it, you could apply to enter it,” says Harold Akerman, one of the organizers. “That meant over the years folks could bring an antique car or a vintage truck, but it could also be a motorcycle or specialty vehicle or even a brand new 2016 or 2017 vehicle.”
Among Harold’s favourite “wheels” to have rolled into the Bay Arena is the very Landrover in which former premier Joey Smallwood drove across Newfoundland during the 1960s, upon the completion of the Trans Canada Highway across the island portion of the province.
The first-ever Bay Wheels show featured around 34 vehicles, recalls organizer Ross Dawe. Nowadays, up to 3,500 auto enthusiasts attend to admire approximately 50 sweet rides displayed at the Bay Arena. 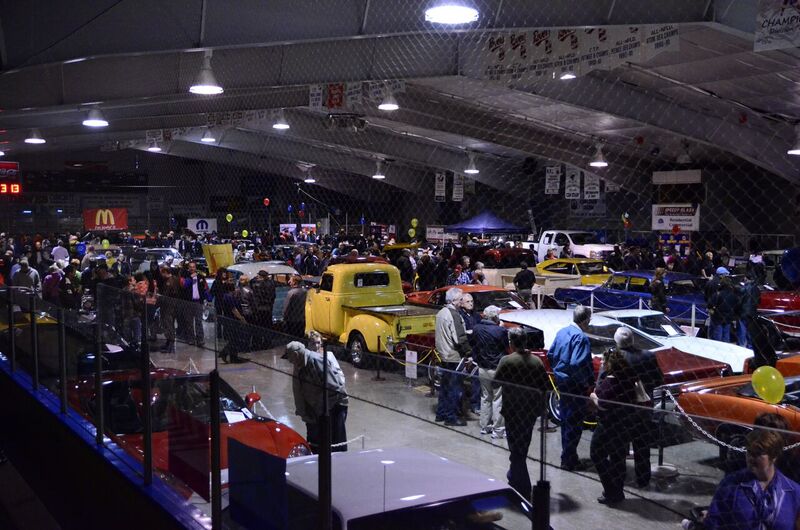 “There are lots of great cars out in the parking lots as well that, while not officially part of the show, are really worth having a look at. Folks enjoy bringing their own special cars and vehicles when they come out to Bay Wheels and that adds to it all as well,” says Ross. “We’ve pretty much seen it all over the years in terms of unusual or unique cars. A couple that jump to mind are the excellent collection of cars from Mr. Vernon Smith of Swift Current, who usually brings down a different vehicle each year.” (Click here for a story about Vernon’s Antique Toy Shop.)

Importantly, Bay Wheels isn’t just about cars. Over the years, raising funds for charity has been one of the event’s main goals.

Organizer Wendell Dawe estimates that after this year’s show, Bay Wheels will have donated close to $100,000 to various organizations - everything from Ronald McDonald House to the VOCM Cares Foundation, Newfoundland and Labrador Cerebral Palsy Association and the Cupids Legacy Centre, to name just a few from a very long list of worthy recipients.

Turning 30
This year’s Bay Wheels takes place June 3-4, and since this is the 30th anniversary of the show, organizer Lloyd Kane hints they may have a few small surprises in store, in addition to all the regular events, attractions, door prizes and giveaways to children that visitors enjoy. For anyone who might recall attending the very first Bay Wheels in 1987, a few vehicles from the event’s debut will be making return appearances. They include Roy Dawe’s 1954 Ford Crestliner Victoria, Ross Dawe’s 1950 Chrysler Royal and Harold Akerman’s 1930 Ford Model A.

At least one other aspect of the earliest show will be familiar: the registration price. Incredibly, the cost to enter a vehicle in the show, $10, has remained unchanged for 30 years. Admission has increased, but only slightly - from $2 to $5.
“We decided from day one to make this show as affordable and accessible to as many people who love vehicles as possible. That, plus the great support from participants, volunteers, sponsors, organizers and the general public who love the event and keep coming back year after year has made Bay Wheels the success it has been for the past 30 years. It is a tremendous team effort all the way around,” says Harold.
On Saturday night, says Wendell, event sponsors and participants will get together as usual at the Lodge for a barbecue and auction, with these proceeds going to charity as well.
“It is something people look forward to as much as the show, and we get people who sign up year after year from all over the province,” says Wendell.

As I am about to leave, Ross shares with me one last great car story.

“My car once belonged to a Mr. Cyril Flynn of Avondale, who operated a general store up there. The car is a 1950 Chrysler Royal…when I had it finally all restored I called him up out of the blue and took him for a ride in it, which he really enjoyed. That was all fine and I pretty much forgot all about it,” says Ross. “A nice time later I was checking on the car one night in the garage that used to be attached to the house, and I noticed the brake lights were on for no reason. I pumped the brakes and started her up and shut her down and tried a few things, but they would not go off. So rather than leave them on I disconnected them for the night and went to bed. Next day, I hooked them up and they worked fine. Couldn’t find any reason for it. I only learned later that Mr. Flynn had passed away that night. Now I can’t say what happened, but I sometimes wonder if his spirit made one last stop to get a ride in his car, and left the brakes on.” - Story and photos by Dennis Flynn