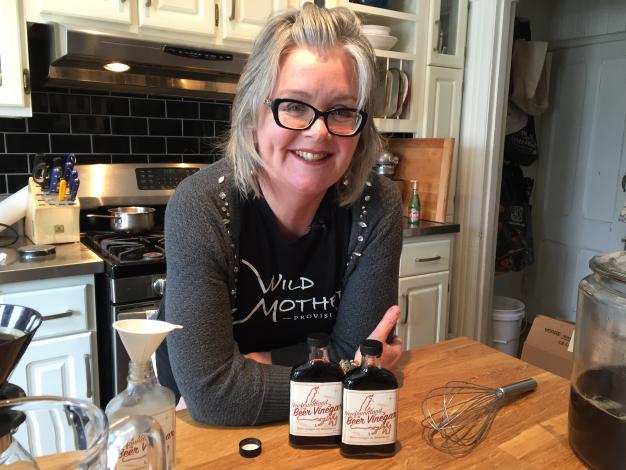 There’s a new, yet old, flavour being produced right here.

The first time Janet Harron heard of beer vinegar, she was living in Dublin, Ireland. Her husband was working at a brewery and had taken to experimenting with the condiment. After they moved back to Newfoundland, she never forgot about it. Now, Janet is the creator of Wild Mother Provisions, the sole beer vinegar producer in the province.

If you’ve never heard of beer vinegar in your life, it wouldn’t surprise Janet. But it actually has an old history, stretching back 500 years.
“Beer is a very, very old beverage. In some cases people think it might pre-date wine. So they wouldn’t have access to wine vinegar as much in the Middle Ages,” says Janet. “Wine would have been reserved for the kings and queens and the upper crust. But the majority of the population
would regularly drink beer.” People eventually figured out how to use the abundant supply of beer to make vinegar.

Janet first started selling her Newfoundland Beer Vinegar last year at the St. John’s Farmers’ Market (where she’s also sold baked goods for six years) and it can now be found in several stores, including the Rocket Bakery and Heritage Shops across the province. She describes it as a “gourmet version of a malt vinegar.”

Beer vinegar’s taste is “a bit beer-y, but it’s got all that acidic tang that any vinegar would have. It doesn’t have that thickness of a balsamic vinegar, it’s not sweet like that. But there’s a lot of different uses for it in terms of cooking,” she says, adding it has a different flavour profile from wine vinegar or white vinegar.

It can be used in everything from salad dressings (Janet’s personal favourite), to reductions, marinades and even in coleslaw. Basically, it can be used like regular vinegar, and Janet says she’s always asking customers what they use it for to get inspiration.

Janet’s husband, Liam McKenna, is the brewmaster at YellowBelly Brewery, so he’s been a big help with the science behind beer vinegar. The beer she uses is actually excess beer from YellowBelly’s packaging process, so it’s a way to recycle food waste that would otherwise get thrown out.

But at the heart of making beer vinegar is a “wild mother,” which comes from the air, explains Janet.

“There’s wild yeast in the air. And it’s a similar process to a true sour dough starter… Liam started the wild mother for the beer vinegar in the brewhouse at YellowBelly because the brewhouse has a lot of really interesting aerobic bacteria in the air, you know, it’s got yeast, it’s got malt,” says Janet. “So if you leave out stout exposed to oxygen, the aerobic bacteria transforms that alcohol into acetic acid. So it becomes the ‘mother’ and then the mother is added to the beer and that helps make it a little bit more flavourful than it would be if it was just beer exposed to air and over time becomes vinegar. Because once you expose it to oxygen, that helps turn it into vinegar.”

It normally takes between two and three weeks to make a batch of Newfoundland Beer Vinegar.

In addition to recycling food waste, Janet says she is looking for other ways to reduce her carbon footprint by seeking out a cache of bottles that are already in the province.

Besides taking an environmentally minded business approach, Janet also describes her business as a feminist enterprise.

“I’ve always identified myself as a feminist and I think being a feminist food company is about living those values as your business,” she says. For her, that means buying locally and working with other female-owned businesses. The name of her company, Wild Mother Provisions, is also a part of that ethos. “It’s about mothers and food as well. Mothers have been the ones that sustained us with food,” says Janet.

As Memorial University’s communications advisor, Janet is used to promoting others and says it's exciting to be promoting something of her own.

When it comes to the future of Wild Mother Provisions, Janet is moving carefully, though she has big dreams for down the road.

"I’d like to have a couple of outlets in Toronto," says Janet. "I’m really excited by the project.”
-Elizabeth Whitten