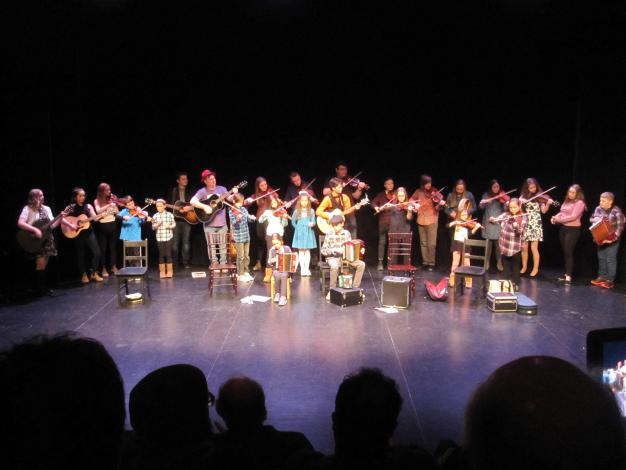 Youth perform during Young Folk at the Hall in St. John's this winter. (Linda Browne photo)

It's a clear, crisp Sunday evening in downtown St. John’s and the February snow blankets the ground in a sparkling sea of white. At the bottom of Victoria Street, at the historic LSPU Hall, children in winter coats and mittens walk in through the doors, some toting along bodhrans almost as big as them. The sounds of accordion, guitar and fiddle float on the air. It may be freezing outside, but in here the kitchen party-like atmosphere has cast a warm glow.

Some may have the impression that folk and traditional music is fading into the background. But thanks to the annual Young Folk at the Hall program, organized by Fergus O’Byrne of Ryan’s Fancy fame, a new generation of traditionalists is playing loud and proud.

Like Father, Like Son
You might say that Fergus O’Byrne is a born entertainer. He studied piano as a child growing up in Dublin, Ireland and fondly recalls gatherings with family and friends where anyone who could sing a song or play a tune would take turns entertaining.
“You came in and everybody would sit in a circle and people would do a party piece...so I would play 'Für Elise,' for example, and my mother and father would sing a duet, and then maybe a cousin might tell a story or an uncle might sing another song,” he says.
When he was 14 years old, his father brought home a mandolin, and then a guitar. A couple of years later, in the late ’60s when the folk revolution was in full swing, Fergus gravitated towards singing. When he was 19, he came to Canada and set out searching for an office job, but it wasn’t long before he “tumbled head over heels into the music scene.”
“I quit my day job and became a full-time musician. And so that’s what I’ve been at now these last 48 years,” he says.
In 1971, Fergus moved to Newfoundland with his Ryan’s Fancy bandmates (Denis Ryan and the late Dermot O’Reilly). While the young men planned to make music to put themselves through university, their spirited live performances and television series made them bonafide legends, inspiring a younger generation of Newfoundlanders and Labradorians to rediscover and embrace their traditional roots.
Some might say that Fergus’ son, Fergus Brown-O’Byrne, 31, is following in his father’s footsteps. But the younger Fergus is dancing to the beat of his own bodhran. While he was constantly exposed to traditional music through his parents, “the actual learning and playing of it is really his own take on the whole thing,” says his father, who, as a touring musician, was on the road frequently when his son was growing up.

An accomplished musician in his own right and a member of the band The Freels, the younger Fergus has made a name for himself on the province’s traditional music scene. Like his father, he learned to play piano as a child, eventually mastering the accordion, fiddle and concertina, and a number of other instruments, along the way. While some may think of it as their “grandparents’ music,” there was never a point, he says, when he considered trad music to be “uncool.” These days, he’s sharing his love of the jigs and reels with his own music students.

“I always really enjoyed it. It’s a really fun style of music to play,” he says. “There’s always a new level you can kind of push it that’s mechanically really challenging. So I always found that engaging.”

Music & Friends
When his son was a teenager, the elder Fergus began thinking of ways of bringing together young people who, like his son, had a passion and penchant for playing traditional tunes.
“My wife Irene used to take him down to the sessions (at the pubs), to have him exposed to the music. So I figured there must be kids out there who also play, but are not coming down to the sessions. So then we sort of dreamt up the idea of Young Folk at the Hall,” he says.
Sixteen years later, Young Folk at the Hall (YFATH), produced in collaboration with the Newfoundland and Labrador Folk Arts Society, is still going strong. The idea is simple, but its legacy is profound. The program (which is volunteer run and free for participants) brings together youth aged 7-18 for two, two-and-a-half hour workshops led by mentors - many of whom, like Fergus Brown-O’Byrne, participated in the program in previous years.
“Because the program’s been going on long enough now, some of the people I’ve mentored are now mentors. So it’s kind of the third wave of people going through the program,” he says.
The youth are put into groups and are encouraged to tap into their creativity as they come up with their own band names and practise tunes from a traditional repertoire.
“The whole idea is to really give as much ownership to them as possible…they bring the repertoire to the table; they, with the mentor, arrange it; and they come up with the name and how they’re going to present it,” says Fergus Sr.
The workshops (which give youth the chance to share with, and learn from, each other and bond over a love of traditional music) culminate in a live concert at the LSPU Hall with all the bells and whistles of a professional stage show. In the below video, Conor's Angels (consisting of Kiera Hynes, Jenna Maloney, Conor Nemec, Grace Abbott and Paige Pike), perform "Is You 'Appy" during this year's show.

“The stage hands are there, they’re setting up the mics and the lights, so the children come out and as far as they’re concerned, they’re in Carnegie Hall. We treat them as professionals and we respect them for that,” says Fergus Sr.
“A lot of these kids haven’t worked together before. They’ve just been thrown together. They’re very tentative when they meet, like all people are. But within half an hour, through the mentorship and the love of the music, they tend to just really fall into it. And then by the time they’re ready to go to stage, they’re just all bubbly and excited.”
For the elder Fergus, YFATH is also a way to pass on some of the knowledge and kindness that was shared with him and his bandmates in their earlier years.
“When I came to the province first, I had the great fortune to meet Rufus Guinchard, Émile Benoit, Pius Power, Mack Masters, Minnie White - all those people who were tradition-bearers in their own communities. And they generously gave to us their time and their music and were patient with us to sit down and chat,” he says.
“That’s what music is all about really…the idea of passing it along.”

Beyond the Overpass
YFATH has grown so popular (this year’s event in St. John’s saw its highest registration yet at 52 participants and included two concerts and a traditional dance troupe) that several years ago, Fergus started taking it outside the city to places like Stephenville, Marystown, central Newfoundland and Conception Bay South. This May, he’s bringing it to the Songs, Stages and Seafood Festival in Bay Roberts for the second time. The workshops will take place on May 20 and 27, followed by a concert at St. John the Evangelist Church Hall at Coley’s Point on May 28 at 7 p.m.
“It’s quite extraordinary really. When I started it 16 years ago, I had no idea that it was going to end up as it has,” he says.
The program has made a lasting impression on many of the youth. Some of the previous YFATH participants have kept up with performing, such as Fergus Brown-O’Byrne and Danny Mills of The Freels; Rosemary Lawton of the Pints; and Aaron Collis of The Dardanelles and Rum Ragged.
“So that’s a good sign that as younger people start playing together at an early age, then it keeps it going,” says the younger Fergus.

Judging from the talent and enthusiasm on display at this year’s concert in St. John’s, it’s clear that the future of the province’s traditional music scene is in good hands. Some of the accordionists’ feet may barely sweep the floor, but from their tiny wooden chairs, they command attention, their audience hanging on every note.
Fortunately, it looks like YFATH is here to stay, if Fergus O’Byrne has anything to say about it. He hopes it will continue “forever and ever,” he laughs.
“The Folks Arts Society...are very, very pleased with what it’s doing and their mandate is to promote and preserve traditional folk music and story and song,” he adds.

“And that’s what Young Folk really is doing. It’s giving those kids the passion." - By Linda Browne