Past the spectral tree scraping the sky, its branches reaching for cumulus clouds, I spot the T-Rex resting on low haunches in the peaceful valley. I have no fear as I approach. I am, in fact, filled with anticipation, for the T-Rex is not an ancient predator but the former Port Rexton community centre - now the home of Port Rexton Brewing Company.

Inside, sunlight falls upon a dark wood, acoustic guitar cozying up to a glass cabinet showcasing vintage growlers (small glass jugs once used to carry draught beer bought by the measure at local pubs) from around the world. I smell something pleasantly reminiscent of the clinging hops vines that once grew in my grandmother’s yard. There is the echo of banter and the clink of glasses as a small group a few minutes ahead of me concludes their tour. Near the entrance to the taproom, two long wooden tables with eight red chairs apiece coexist with a pair of plush, green armchairs in a companionable space ringed with local artwork under firefly-like lighting. At the rear, at least a half-dozen huge, stainless-steel cylinders dominate a railed off lower area in the open-concept production space. 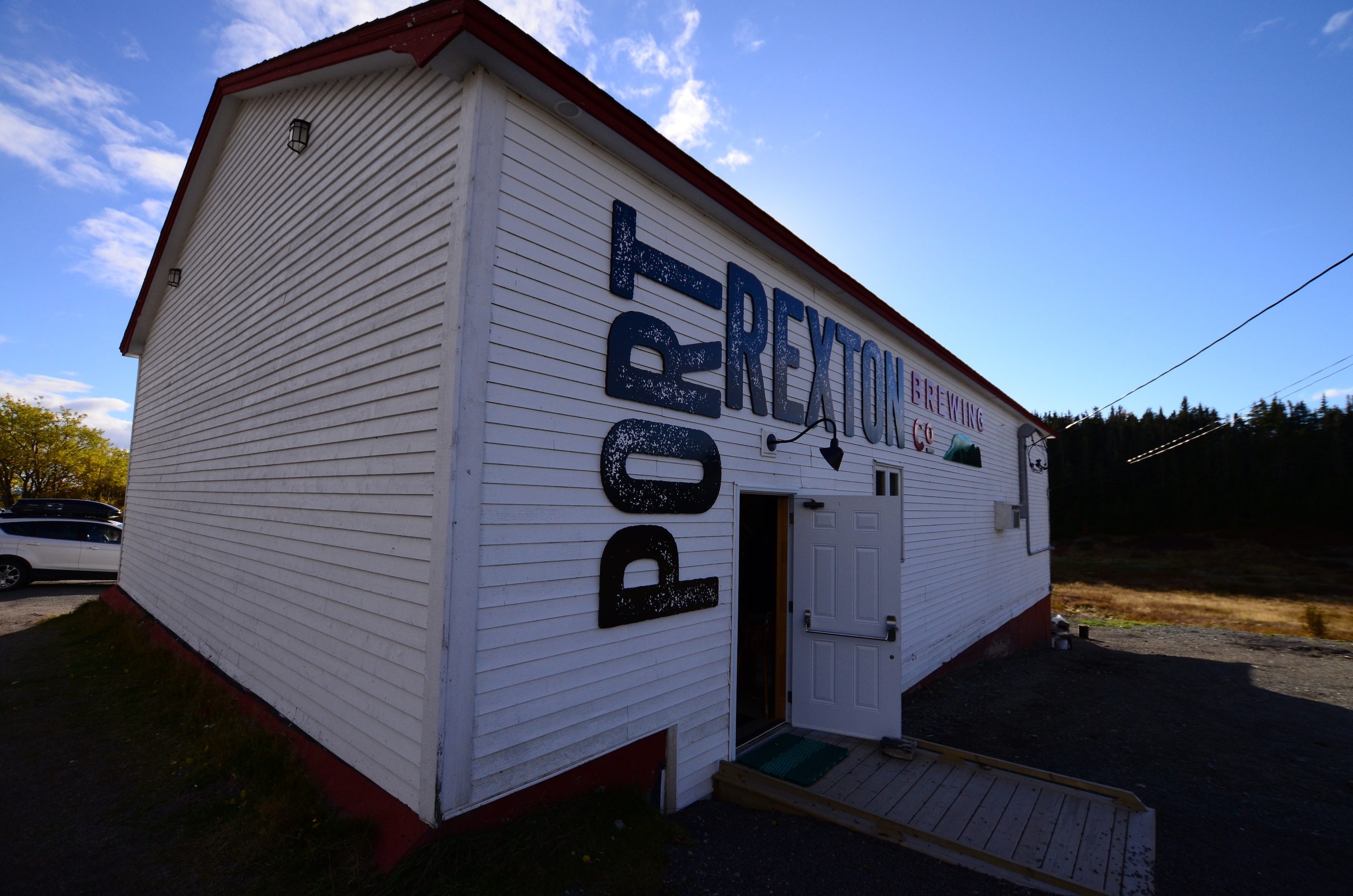 A chalkboard behind the bar announces today’s five varieties of beer: Gardeners Gose, Sweater Weather Smash DIPA (Double India Pale Ale), Baycation Blonde, Horse Chops IPA (India Pale Ale), and (my eventual personal favourite) T-Rex Porter. (During my tour, I learn that the Gardeners Gose is actually a relatively rare treat of a beer and this one uses coriander from the greenhouses at nearby Fishers’ Loft, as a substitute spice instead of hops.)
This facility, one of several microbreweries now operating in Newfoundland and Labrador, opened last July and has been enjoying a very warm welcome. I’m lucky the owners can sneak away for a chat with me about the brewing business.
The talented beer aficionados behind Port Rexton Brewing are business (and life) partners Sonja Mills and Alicia MacDonald, both of whom have extensive experience with microbreweries in Nova Scotia. They were motivated to set up operations in Port Rexton after recent visits to Sonja’s hometown of nearby Clarenville.

“We had a personal connection to the area, as I knew growing up and hiking around here how beautiful it is and all the tourism potential,” says Sonja. “We were married nearby three years ago at English Harbour and knew we would love to move back to the area. It turned out this building was available, and it went from there.” She adds, “I was actually in this building when I was in Grade 7 for a dance, so I did know about it. I guess it is kind of full circle to come back here. Of course, beer is now legal in it.”

Alicia is a nurse practitioner-turned brewmaster. When I ask her why they chose Port Rexton, she replies “Why not?” She explains, “When we were living in Halifax we were initially thinking of opening a brewery near Truro, Nova Scotia and had really researched the idea and saw the great opportunities, but after we relocated to Newfoundland we fell in love with this place.”
The location was ideal for them, Alicia says, being on the Trinity Bay side of the peninsula, and when they learned this vacant building was in danger of being torn down, they decided it needed to be saved. “So that is what we did and it has worked out great.” 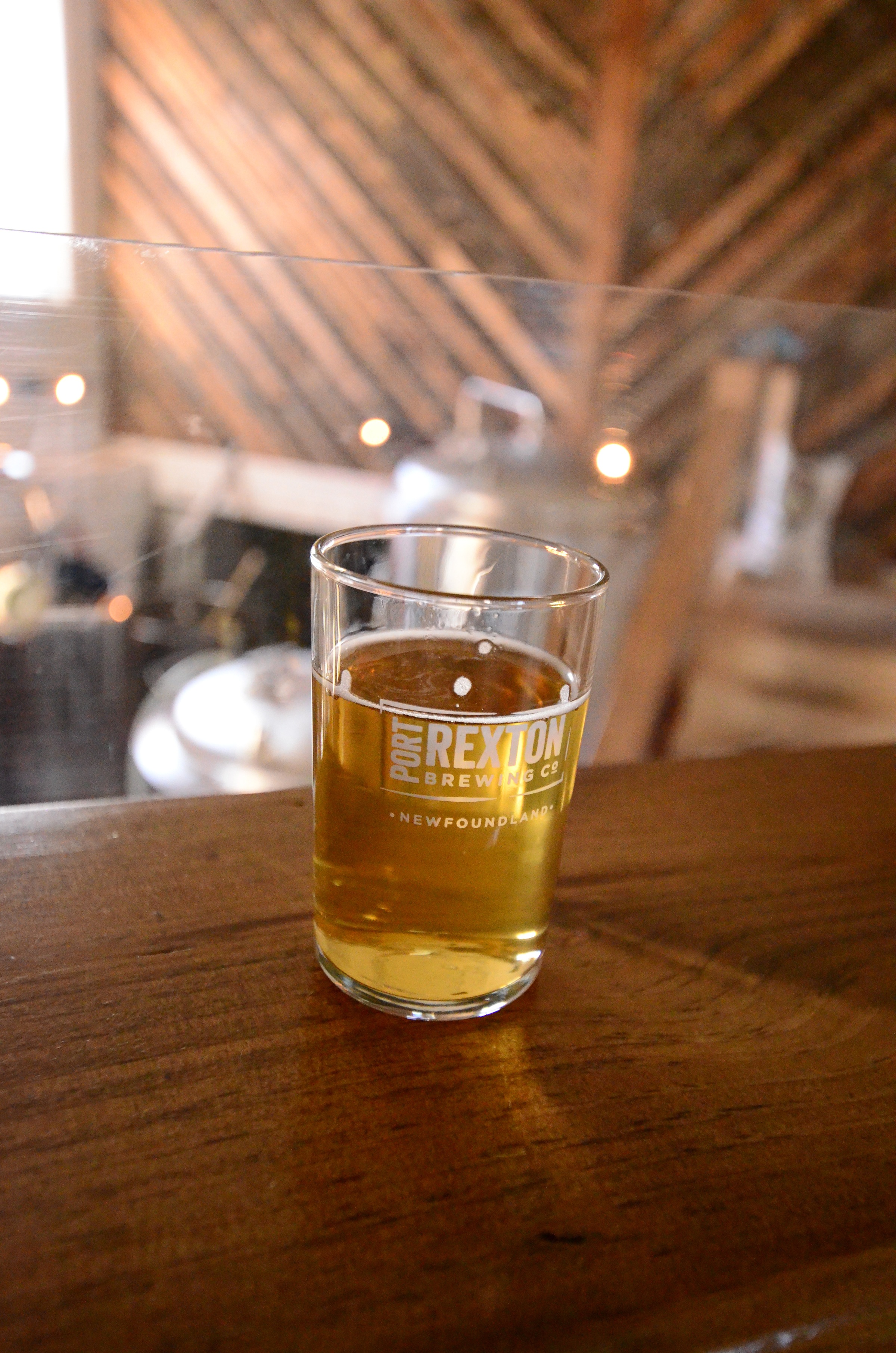 It’s only been a year, but the brewery has been running full tilt.

“We brew about five times per month and that is based on the size of our fermenters. We have three fermenters and the beer sits in them for about two weeks to two-and-a-half weeks, and when it is ready to move we brew again,” Alicia explains. “Every batch of beer is, on average, about 450 litres.”
She adds, “We have been very pleased with the first year and gotten visitors from all over the globe, and even some well-known beer world writers/celebrities who have been great. If you can’t get out to Port Rexton in season (the facility is open to the public May to October), we are starting to have our beer on tap in St. John’s at places like Mallard Cottage, Adelaide Oyster House and Merchant Tavern.
As I’m enjoying my sample beverage, I look around and wonder on the building’s history. Alicia explains that before this was a community centre, it was a school. The “T-Rex” was a nod to the principal, Tom Rex. That gets me thinking.

“Did you keep any school notes found during the conversion to a brewery?” I casually ask Alicia.

She gives me a very curious glance and replies, “What makes you say that?”
Recalling my school-age mischief and minor romances, I confess, “Because I, and almost any of the kids I grew up with in rural Newfoundland, would have passed a few notes in class. At least a few of them would have been lost or confiscated by the teachers or simply left behind.”
Without another word, Alicia departs and returns a few minutes later with a small box of aging paper. Smiling, she says, “We found most of these hidden behind the stairs. It must have been a bit of a secret location for the kids to pass messages. There were a lot of them.”

As I pick through, I see the wrappers of Big Turk bars and other treats of the day. There are a child’s drawings of a woman with a 1950s-era beehive hairdo and an assortment of fashions. There is a letter in swirling script dated September 22, 1964: “Judy Bradley, I guess you are mad with me, but I don’t care. So you know I am mad with you, too. (Ha) (Ha), Linda.” I grin and hope that after 53 years Judy and Linda are no longer mad at each other.

My favourite item takes up a full sheet of fading beige paper. In blue ink, in upper and lower case letters, a youthful hand had written: “You and I have a game of cowboys after school.”

As we continue digging through this treasure box, we gain the attention of several visitors. Together we smile and laugh at these childish notes and share our own stories over our sample beverages. It’s a spontaneous gathering of new friends to talk about old times.
At the end of the day, it’s only fitting to raise my glass and toast to the health of the Port Rexton Brewing Company.
Long may they taste success. - Story and photos by Dennis Flynn