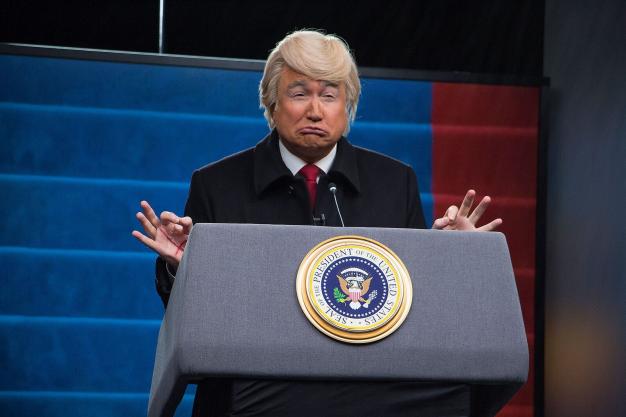 Behind the news desk, Mark Critch stands up straight, adjusts his tie and flips through the scripts in front of him. By all accounts, his demeanour is one of a serious news anchor.

But, there's a faint twinkle in his eye. And if you look closely, you can see the corners of his mouth turn upward, just slightly.
The dramatic, blank stare after the punchline gives it away. It's the kind of look you might expect from Rex Murphy if you were to ask him the most trivial question in the world. It's all in the facial expressions and comedic timing. The audience in front of him erupts into laughter.
Of course, Mark isn't really a reporter. He just plays one on TV. At 42 years old, he’s an actor, comedian, writer and star of the CBC’s award-winning news parody, political satire and sketch comedy show “This Hour Has 22 Minutes,” now in its 24th season.
“But, if I wasn’t doing that, I’d probably do journalism,” says Mark. His father was a prominent radio news director in his hometown of St. John’s, Newfoundland, and politics was often a conversation at the dinner table - which isn’t surprising, given that Critch is well known for his witty political commentaries and ambush-style interviews with politicians and celebrities. His ability to manoeuvre between the lines of news, comedy and politics is impressive and his knowledge of all fields is extensive.
“It’s amazing, the way Mark is able to focus so intellectually on what’s going on in the world, comment on it, go toe to toe with world leaders and then switch it back the other way, and just come in and be entirely silly and make people laugh,” says Jason Shipley, a floor director on “22 Minutes.”
Co-star Meredith MacNeill agrees. “He just knows it, he knows what to do. His mind is so quick; he works really fast. I’d say that working with Mark Critch is like working with one of the quickest minds in the world,” says Meredith.
Mark always knew what he wanted to do when he grew up. As a child, he was hugely influenced by the comedy show “Wonderful Grand Band,” which featured Newfoundland and Labrador entertainment legends like Ron Hynes, Tommy Sexton and Greg Malone.
“I didn’t want to be on ‘Happy Days,’ I didn’t want to be on ‘Three’s Company,’ I wanted to be on that show. I wanted to write my own stuff, set in Newfoundland, and do it. And that’s what I’ve been able to do,” he says.
At 15, he rented the iconic LSPU Hall in downtown St. John’s and would sneak away from school to practice sketch comedy, mostly satirical commentaries on Newfoundland and pop culture. After his first performance, he was hooked.
That show ran for seven years, and Mark began to make a name for himself, landing more and more acting and comedy gigs. The CBC approached him, offering him work as a radio commentator and eventually on the evening news hour. That’s when Mark really started getting into the political side of comedy.
Newfoundland and Labrador has produced some of Canada’s most well-known political commentators and satirists - Rex Murphy, Rick Mercer and Mary Walsh, to name a few. Since its beginning, the cast of “22 Minutes” has been mostly made up of Newfoundlanders, something Mark attributes to a political culture within the province that easily lends itself to comedy.
“We joined [Canada] in ’49, so that shapes the point of view. You’re always an outsider, which is great for comedy. It’s a hard place to live and there’ve been very hard times there and that forms a certain snarky, dark sense of humour because you need that to get through the hard times.
“Newfoundlanders talk about politics all the time, there’s a lot of arguing, and I think that comes from having to give up your nation not all that long ago. People argued about politics in a big way, and I think that kind of stuck,” explains Mark.

When it comes to arguing about politics nowadays, however, the Internet has changed things significantly, and Mark has noticed a shift in the way that people deal with politics and each other.

“The way politics goes online, people are just ‘I hate you, you’re evil, you’re different,’ and it’s getting crazy now. It’s gone way too far. That’s not what politics is,” says Mark.
“With Facebook, it’s all your friends, and algorithms show you things that you’re going to agree with. And that’s why people are shocked that Donald Trump won, because everything online is showing them that everyone on the planet thinks the way they do. And it’s a lie.”
As far as Mark is concerned, the only way to really understand what’s going on in the world is to get out there and actually speak to the people you may disagree with.
“The more discourse like that, the more the world becomes a better place because you can start to see maybe some cracks in your own logic, but you also get to see people’s reasonings for why they think the way they do,” he says.
In that spirit, Mark feels that it’s his duty as a public figure with a large platform to interview politicians from all parties and backgrounds as fairly as he can - fairness in both the amount that he pokes fun at them and in allowing them to respond.
“I’m not just ranting at them, they can say something and I have to respond to it, so it’s fair. We’re both doing it without a net, so it’s an equal contest. When you’re listening to them, when you’re reacting to them, that’s when the best stuff happens,” says Mark.

Mark also feels that it’s his responsibility to air things that some politicians would rather not see made public. He made national headlines back in 2013 when “22 Minutes” aired a clip of him hauling out a joint in Justin Trudeau’s office, a stunt which Trudeau’s staff requested not to be broadcast. According to Mark, “If somebody asks you to take something out, you can’t, because then you work for them.” Stephen Harper, on the other hand, required that questions be screened prior to an interview, something Mark refused to agree to.

For Mark, the political satire on “22 Minutes” isn’t just about making people laugh; it’s a way of engaging the nation with politics on a larger level. Clips on the show’s Facebook page often have millions of views each. According to Mark, more Canadians will tune into “22 Minutes” on a Tuesday night than The National, which is one of the reasons why so many politicians agree to appear on the show and keep coming back.
“If you have people who are interested in your party or your view, that’s great,” Mark says. “But when you get your message to people who don’t care at all, or would never care about it in a million years, and you get them to watch it for two minutes, that’s a pretty powerful tool, and it’s a great agent for change.” - By Stacey Seward