Smallwood, Diefenbaker and the Queen of England 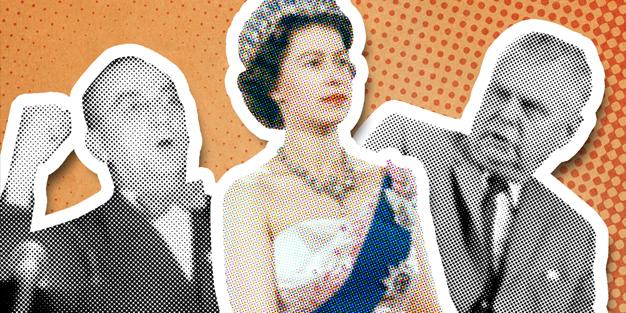 In the late 1920s, cars and radios began to appear in our town of Grand Bank, Newfoundland. Our family's first radio was equipped with earphones, and only one person at a time could listen to it. It was powered by a pack of large, round screw terminal batteries. Later, when main line electric power came along, we became the proud owners of a Philco cabinet radio with a loud speaker. It was on this radio that we kids first heard Big Ben and the voice of the King on Christmas Day. We also owned a 1928 (second-hand) Studebaker sedan. It was referred to by (envious?) non-owners as the “Frazer Hall” on wheels because it allegedly resembled that ugly church meeting hall.

While short-wave radio reception from the UK was good, standard AM broadcasts from Sydney, Nova Scotia, and Newark, New Jersey, were the only two East Coast stations we could be sure to be able to tune into - and this was in the early 1930s! Even VON St. John’s was unavailable to us at that time.
Later on, we were privileged to tune into the St. John’s station, but we were quickly disappointed that the “Barrelman” show, sponsored by Gerald S. Doyle Cod-liver Oil and starring Joey Smallwood telling tall tales, was a large part of the main bill. Little else of much interest outside the environs of St. John’s was aired. For example, we had to tune into New Jersey to listen to things like the Joe Louis boxing matches, while we heard not much besides Joey’s wisdom and the St. John’s weather on VON.
This same Joey Smallwood’s gift of gab and twisty oratory would eventually propel him to much greater heights and achievements, including the bringing of Britain’s oldest colony into the Canadian federation. Without him, the completion of the Canadian federation might not have been realized. Joey (modestly) referred to himself as “The Only Living Father of Confederation.”
Among Joey’s most passionate beliefs was that only a Liberal government in Ottawa made any sense. At every opportunity he made clear how little he admired the PCs when they came to power, led by Diefenbaker. He left the impression with the people of the outports that, were he and his Liberals not to be re-elected at any time in the future, such Confederation benefits as Old Age Pensions and Child Allowances could be lost.
On one occasion, in 1959, perhaps to ensure his omnipotent image was justified, Joey used his position to make sure he - and nobody from Ottawa - would be the first to greet the Queen when her aircraft landed at Torbay Airport on the first stop of her Canadian Royal Tour. I was there as captain of the C5 VIP aircraft and bore witness to this spectacle.
The official printed program for her arrival aboard a BOAC Comet jet indicated that Prime Minister Diefenbaker would officially greet Her Majesty as she deplaned. However, the prime minister’s aircraft from Ottawa was late, and his appearance was further delayed by the fact that his aircraft had been (craftily?) diverted to a remote, supposedly secure, parking spot on the airfield.
While the prime minister was being rushed by limo from his aircraft to the terminal area where the Royal aircraft was already parked, Joey took matters into his own hands. Rather than wait, Joey stepped forward and indicated to all concerned that the Queen should now deplane. She did, and Joey officially welcomed her, first to Newfoundland - and then to Canada!
And when he finally appeared to greet the Queen, the prime minister’s famous jowls were visibly shaking as he realized Joey had upstaged him. Meanwhile, Joey was beaming from ear to ear as he presented the prime minister to Her Majesty! Prime Minister Diefenbaker did not act as happily as he tried to look. - Submitted by General Bill Carr

Bill Carr is a retired Lieutenant General of the Royal Canadian Air Force.