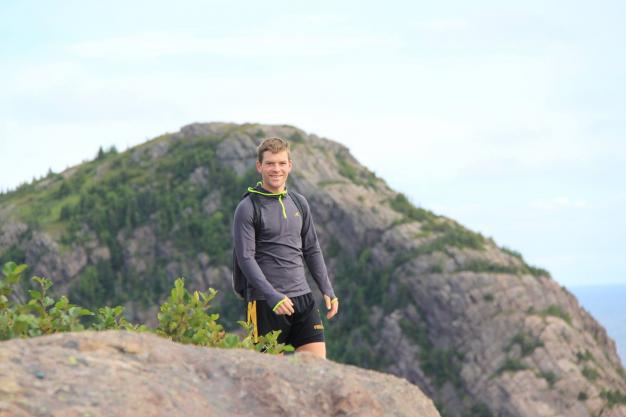 When Eoin Mac Gearailt landed in Newfoundland  last summer, he was ready to teach as Memorial University's latest Irish Scholar, but he wasn't sure what to expect from the province. While Newfoundlanders often boast of our connection to the Emerald Isle, Eoin (pictured above) didn't know much about this Canadian province prior to packing his bags. Internet searches showed pictures of icebergs, and he'd been warned about the cold. Fortunately, he arrived to sunny skies and 24-degree weather - but unfortunately, there were no icebergs in sight.
He quickly found out that the name for Newfoundland in Irish - a version of Gaelic spoken in Ireland - is Talamh an Éisc, or "Place of the Fish."
"It's the only place outside of Ireland that has an official Irish place name…A lot of places are directly translated from English to Irish. This place has its own Irish name, so that's very interesting," Eoin says.
Every year, the Ireland Canada University Foundation selects a number of Irish language speakers to teach at Canadian universities as Irish Scholars, which allows Canadian students to learn the Irish language from actual speakers and helps instructors cultivate their teaching skills. Part of Eoin's role as an Irish Scholar is to promote the unique language and culture of Ireland, something he does enthusiastically.
During MUN’s fall semester, Eoin taught “Introduction to Irish Culture,” and he’s currently teaching “Introduction to Irish Writing and Cultural Connections.” These courses offer beginner language skills and an overview of Irish culture, which includes studying Irish writers, film and music. Eoin says in the past there was somewhat of a stigma associated with speaking Irish, but the language is being revived and people are now proud of it.
He’s taught a wide range of students at MUN, from recent high school graduates to retirees. He has an Irish speaker in class this semester, and others who have taken Irish courses in previous years and are looking to refresh their knowledge. And he’s met folks here whose Irish accents are so strong, “you’d actually think they were from Ireland,” says Eoin.
It’s no secret that people from this province feel a close connection to Ireland, with many having Irish roots. And when Eoin asked his students why they wanted to take an Irish course, he got a wide range of answers.
“They want to find out more about their selves, connect more with language and things like that,” says Eoin. He recalls one girl in class whose grandmother spoke Irish and this student wanted to keep up that tradition. “And that was cool, for someone who’s completely outside of Ireland to say they want to keep the language up - which is great,” he says.
Other students enrolled because of their interest in Irish music. “There’s a big connection between the Newfoundland music and Irish traditional music. They’re very similar and a lot of the chords and the reels that they play here are very similar to Irish ones,” says Eoin.
His students’ desire to connect to their Irish heritage has made Eoin reexamine his own culture, and the many components - language, music etc. - that make Irish people Irish.
When he applied to be an Irish Scholar, Eoin didn’t have a say in where he’d end up. “I just saw this advertised in the paper: Teach Irish Abroad,” he says. “So I love Irish language and everything, because it’s my first language. So I just applied for this and you could have been placed anywhere across Canada…So I just ended up being sent here.”
He considers himself very lucky to have been assigned to St. John’s.
“I thought it was a small fishing town, like you know, something similar to what I was used to at home…It’s a lot bigger than what I actually expected,” says Eoin, who hails from the fishing village of Ballydavid on Ireland’s west coast. He now lives in MUN’s student housing in the Battery, right in the heart of the city. “You could either go walk up the back of Signal Hill and you’re in the countryside or walk downtown; you could be on George Street with 15 minutes walking downtown. So it’s actually great, I have the best of both worlds.”

When asked if anything about his new home has surprised him, Eoin admits the people have been a surprise - a welcome one.
“I wasn’t sure what to expect when I came here. You’re coming from a completely different place. I left on my own, I came here on my own, but what surprised me was how genuine people are. Like, if you were at home and they said ‘Ah sure, come on over for dinner!’…At a half-attempt at an invitation. But here, they genuinely want you to come over for dinner and they’ll actually pick you up. I’ve been brought to dinner a few times by a few different families,” says Eoin. “It’s amazing.”
The Irish Scholar position can stretch to two years, and Eoin doesn’t know yet if his term will be exten-ded, but he says he’d love to stay a bit longer. He’s been touched by the kindness of strangers while making his home in St. John’s.
“Irish people are very similar, but it’s just that I was just kind of taken aback that it happened so quickly and that I was welcomed in,” he says.
But before Eoin leaves, there’s one thing he’s determined to cross off his bucket list: “I’m really looking forward to seeing an iceberg. I haven’t seen one yet, so that’s my main goal.” - By Elizabeth Whitten

Anyone interested in reaching out to Eoin or finding out more about events celebrating Irish culture going on in March, follow along on Twitter @TalamhanEisc.
MORE ARTICLES
load more