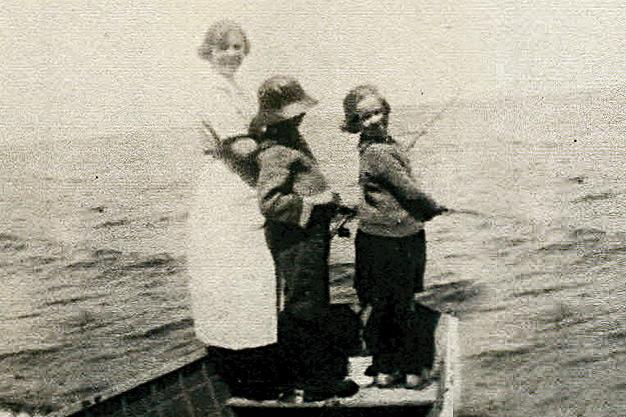 Mellie (left) with the author's mother (right) and uncle
When my mother told me stories about her childhood, it sounded enchanted. She grew up with servants: housemaids, hired hands, gardeners and seamstresses. Her father owned a cement factory and a lumber mill, four working dairy farms, the largest parcel of undeveloped land in the city, numerous rental properties and a summer home on Lake Champlain.
The housemaids helped my grandmother clean the house, prepare and cook the meals, wash and iron the family’s clothes, and can food for the winter. Mellie Best was my mother’s favourite housemaid. She was kind and gentle to my mother. It was only Mellie, with her warm, sweet disposition, who my grandmother considered worthy enough to be alone with my mother.
Mellie was from St. John’s, Newfoundland, and she arrived as a live-in housekeeper when my mother was in the fourth grade. Mellie had dreams of graduating from nursing school and returning to the Grenfell Mission, Labrador to care for the sick, but first she needed her high school diploma. My mother and Mellie both had dark brown hair, round faces and friendly dispositions. They even had the same first name - Elizabeth - so to prevent any confusion she kept her Newfoundland name.
Mellie’s room was on the third floor. It had a small cast iron stove and a small sink. A large window overlooked all the houses her employer owned. My mother looked forward to visiting Mellie in her room in the evenings. She would gaze in wonderment at all her night school books and how neatly she wrote her lessons. Other evenings, my mother brought her dark green catechism to Mellie’s room to recite her prayers. Mellie, who was Protestant, would listen intently, intrigued by the family’s Catholic religion.
My mother’s family had a four-bedroom waterfront camp on Lake Champlain. When there, Mellie would take my mother’s hand and they’d go looking for wildflowers. Mellie walked slowly, remembering when she was young and pudgy like my mother. One day, Mellie got permission to take my mother on a hike to Lookout Point, a large hill big enough to be an adventure but not so large as to exhaust a nine-year-old.
After Mellie graduated from high school in 1925, she went into nurses’ training at the hospital across the street. Though she didn’t work for them anymore, Mellie spent her days off with my mother’s people. On those days my grandmother had the new housemaid prepare special dinners: fresh lobster, roast beef, whatever she knew Mellie would like.
True to her plan, Mellie graduated nursing and worked in Labrador. She eventually converted to Catholicism and joined a religious order of nursing nuns on Long Island, New York. Many years later, whenever my mother stayed with my oldest sister in Centerport, New York, she would visit Mellie at the convent. The first time my mother visited, Mellie didn’t recognize her because my mother had grown into a tall, thin, stately lady. So she said, “If I called you Mellie, would you know who I am?” Mellie rushed to her, threw her arms around my mother and started to cry. When my mother told me about those visits, I realized how much Mellie meant to her. Later, whenever my mother and I wanted a happy story, I’d say to her, “Tell me about Mellie.”
The last time my mother saw Mellie she was very sick, unable to get out of bed. Her hair was combed and she had on a little rouge, which she never wore when she was young, to give her face colour. The next time my mother was on Long Island, she learned that Mellie had died. My sister offered to find where she was buried and take my mother there, but my mother said, “No. It’s too sad.”
On my mother’s bureau next to her bed is the hand-woven, off-white dresser scarf with long tassels made by the Eskimos that Mellie gave her. When I was caring for my mother, she had me wash it by hand in Ivory Flakes. It was delicate and she wanted to take good care of Mellie’s gift.
I often wondered why someone from Newfoundland would enter a convent on Long Island. My mother said she was told Mellie had a brother who lived in Florida. Other than that she didn’t know anything about Mellie’s family. She thought Mellie’s background must have been above average because she always conducted herself in such a lady-like fashion. - Submitted by Martha R. Lang, Ph.D.
MORE ARTICLES
load more