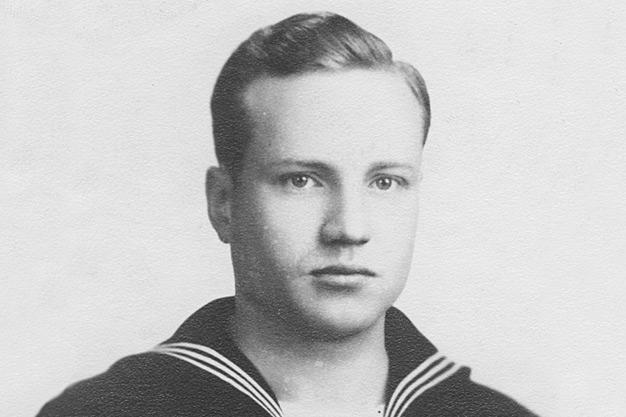 The late Frederic C. Brehm of Wisconsin was one of the sailors who survived the sinking of the USS Pollux, part of a convoy of American naval vessels that ran aground during a storm off the coast of the Burin Pensinula at the height of the Second World War, on February 18, 1942. The following first-hand account was adapted from Frederic's personal essays about the incident, provided to Downhome by his family. Frederic passed away in 2009.

When the Pollux hit the rocks, it lodged itself between a ledge of rock under a cliff and an outcrop of rock under the water and not too far from the ledge. She came to rest directly under the superstructure, with the ledge and the outcrop acting as a fulcrum on which the Pollux yawed and teetered. To the port of the ship were the ledge and a small cove. A heavy offshore gale raised huge waves, which pounded the ship.

With the forward momentum of the incoming waves impeded by the ship’s hull, strong currents were formed at bow and stern in the water’s race to shore. The incoming water filled the cove. Again, impeded by the hull in the waves’ outward flow, a very strong undertow was formed directly under the superstructure.

Watertight integrity is almost completely absent in a C-2 cargo ship hull. In such a precarious position the ship was in eminent danger of losing its perch and sinking like a rock. It was pitch-dark when the ship hit the rock. With those wave and weather conditions, it was highly unlikely that any of us could reach the shore.
All of us stood on deck trying to figure out a way to get to shore. Two officers tried to get a line to the ledge by attempting to paddle a small life raft. It was hopeless. Water was flowing like a millrace and the fuel oil leaking from the ruptured bunkers floated on top of the water, making headway impossible.
This precarious condition remained “status quo” during the morning hours. The waves kept pounding the forward part of the ship until it broke off just forward of the superstructure and sank. The horrible groaning and screeching of torn metal plates will always remain in my memory as the ship went through her agonizing throes of death.

After the ship lost the heavy weight of her forward holds, she again started to lurch off the fulcrum on which she was perched.

At this time, the captain believed it would be only a matter of minutes before the ship would slide off and sink. He then told the crew that if anyone wanted to try to reach the shore, they had his permission to abandon ship. About 90 of us went over the side. When I hit the water and the floating fuel oil, I realized I made a horrible mistake.
When the Captain saw most of the men caught in the fuel oil (which had the consistency of Vaseline in that frigid water); and men were disappearing by being sucked under by the undertow of the ebbing waves, he gave the order rescinding Abandon Ship.
I am unable to explain how I reached the ledge through the floating fuel oil and the wild currents. Someone “Upstairs” must have pulled me to relative safety.
I tried to clamber up, but kept slipping back into the water. The heavy weight of my oil-soaked clothing and the slippery rocks made it impossible without help.

I don’t know how my good friend and liberty buddy, Al Dupuy, got to shore, but he found me and pulled me out of the water. Al had a foghorn voice, which the Captain recognized. He called to Al and told us to come to a point of the ledge nearest the ship and catch a line, which would be thrown to us. Dupuy caught the messenger, which was bent to a larger line. We wrapped the line around a rock, and secured the line as best we could.

The Captain then asked Dupuy what he needed. Dupuy, in his foghorn voice, hollered “Whiskey!” They threw us another messenger to which was attached a pint of “Old Crow.” For the first time and last time in my life, I took a big swig of the liquor and spit it out. I had to wash out the fuel oil in my mouth.
The crew then started to leave the ship by bos’n chair. In true naval tradition, the Captain was the last to leave the ship. Before leaving, he rifled the lockers in officers quarters and sent down as much heavy clothing as he could find for those men on shore who needed it. After the Captain got ashore, he stated that we were in no better shape then we were on the ship, considering the cliff staring us in the face. He then detailed a search party to try and scale the cliff and seek help.
Some time toward late afternoon a line was thrown to us from the top of the cliff. The search party had found a group of men working a mine. Those wonderful Newfoundlanders worked all through the night lifting us one-by-one up the cliff. It was pitch dark when I was pulled up. Half blinded by the fuel oil in my eyes, I tried to find my way to the campfire that had been prepared for us. I lost my way through the snow and rocks, and almost fell off the cliff before I reached the campfire.
We all stood around the campfire, which was more smoke than heat. The next morning the men from St. Lawrence arrived with every conveyance they could find to carry us to town.
Because I had jumped in the water and I was one of the few who made it to shore, I was given a ride rather than walk. I was assigned to a sled, pulled by two dogs who were accompanied by two men. On each corner of the sled was a stick rising about two feet above the body of the sled. A rope was tied around the top of each stick to form a rectangle.
We started off fine until we reached some little hills and valleys. Coming down the first hill, I realized I had a real problem! My trousers were saturated with fuel oil, which acted as a lubricant and I slid forward on the sled until the back of my neck hit the rope. Then the weight of my body from my buttocks to my neck was suspended on the rope. Every little bounce and jerk of the plummeting sled was telegraphed to my neck. The dogs needed the momentum of the downward slide to pull the sled to the top of the next hill. There the men had to stop and lift me to a sitting position. Within seconds of the next downhill slide, this misery started over again.
I was a sad looking sailor! I was covered with fuel oil, shivering with cold and exhaustion. My feet were frostbitten. My eyes were almost swollen shut and stung like mad from the fuel oil and the smoking campfire. My neck felt like it had been chewed on.
Despite all this misery, this ride was the best and most appreciated taxi ride I ever took!

The Newfoundlanders who guided the dog sled led me into a home alongside the road; a lady whom I judge was in her 40s helped me take off my greasy outer clothing, and gave me a large mug of tea, which at that time tasted like “Nectar from the Gods.” Her name was Julia Skinner. Over the years I have deeply regretted that I never wrote her to express my deep appreciation for her help and tenderness.

My eyes gave me excruciating pain from the effects of the fuel oil and smoke from that campfire. She sat me down on a bench, lay my head on her shoulder and gently swabbed my eyes with a boric acid solution. It did wonders to my eyes. By the time we reached Argentia the pain had largely disappeared.

Then she gave me a pair of thick, heavy, woollen fisherman’s trousers and a heavy woollen sweater to wear. A veritable giant must have once worn those trousers! At that time I had a 30” waist, and I had to fasten a fly on a suspender button, leaving one fly flapping in the breeze. I had given my shoes to some sailor who had none at the campfire because I also wore a pair of overshoes - those with a series of buckles to hold them on. The overshoes were adequate enough to keep my feet from freezing.
This fancy outfit certainly was not what the well-dressed sailor would wear! They were the “Uniform of the Day” for me. The Naval Air Station in Argentia was low on uniforms - its replenishments went down on the Pollux.
We were then taken to an old WWI destroyer to carry us to Argentia. I was assigned to a lower bunk in the Guinea Pullman - a long, narrow sleeping compartment traditionally assigned to the engineering crew.
Above me was a machinist mate. I knew him on the Pollux but whose name has been forgotten. Apparently he had fuel oil in his lungs. He was rasping and gasping for every breath. It was so loud that despite my exhaustion I was unable to sleep. About an hour later, his rasping ceased. It is an ugly feeling listening to a man draw his last breath.
When we arrived in Argentia my first act was to take a shower. The soap suds on my body were an ugly tan as the soap cleansed my pores.

After a deep sleep, I was walking along the corridor where I met the Supply Officer. “My God Brehm,” he said, “I thought you were dead!” That shower had finally cleaned my face of fuel oil so I could be recognized.

I do not remember how long we stayed in Argentia, but an old Navy Reefer took us back to Boston. Immediately after leaving port, the ship held an “Abandon Ship” drill. I was assigned to #2 motor boat, 7th trip over. The idea was that the boat would go well away from the ship and dump its passengers in the water - then return for the next load - a not very auspicious start of a voyage, especially through the Gulf of St Lawrence, which in those days was known as “Torpedo Junction.”
We arrived at the Boston Navy Yard at night. It is an old Navy truism that, no matter how often and how loud you pass the word, there is always someone who doesn’t get the word. Apparently the arrival of us survivors was unexpected because we were assigned to an unused sleeping compartment without mattresses, blankets, or pillows. Try sleeping on bare springs! Not very restful!
The next morning we were taken to the Fargo Building (the Receiving Station in South Boston) where I finally was issued a full seabag of clothing.
I probably should have saved that wool sweater and the huge pair of fisherman’s trousers as a memento of the “Uniform of the Day” while I was in Argentia. - By Frederic C. Brehm

Thank you for the firsthand account of what happened to the sailors after they left the area. My grandparents hosted two of the survivors according to my aunt. I should have written down their names as I can not recollect them. The entire town (St .Lawrence) participated in the rescue and revival efforts and apparently Lawn was the same. The Wikipedia entry for St.Lawrence includes much of the history of this tragedy as well as earlier history of the town https://en.wikipedia.org/wiki/St._Lawrence,_Newfoundland_and_Labrador