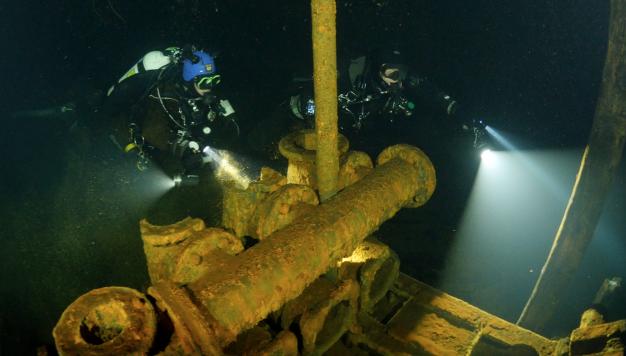 115 feet below the water's surface in the Bell Island mine, local diving guide John Olivero dives with Steve Lewis next to a dewatering pump (obviously no longer in use). Jill Heinerth photo

In 1966, the last mine on Bell Island, Newfoundland, closed down suddenly, leaving hundreds of men out of work. These miners didn't have much of a warning before the pumps were turned off and the tunnels - which span more than 100 kilometres beneath Bell Island and Conception Bay - began to fill with water. Over 50 years later, world-renowned scuba diver Jill Heinerth, the Royal Canadian Geographical Society’s first Explorer-in-Residence, is exploring these mine shafts and has seen first-hand the artifacts left behind. She’s also the co-leader of Mine Quest, a project of Conception Bay South’s Ocean Quest Adventures, aimed at mapping the flooded mines, both for historical records and for future divers.

“There are mines all over the world that are now flooded with water that people dive in. But none like this, where you really do feel like the clock just stopped and everything’s in place. So it’s quite remarkable,” says Jill.

The floors of the underwater mines are littered with things like graffiti, shovels and lunchboxes that miners forgot to take before leaving the tunnels for the last time.

“After the mines got flooded, they didn’t have an inventory of what was left behind, from the artifacts from the actual mining activities itself, to personal items that miners would have left behind. So it’s a really interesting space. It’s like… time was frozen in the moment when water filled the passages,” says Jill.
Since experiencing the mines for herself, she’s been spreading the word about Bell Island. Her expedition was featured in Canadian Geographic (the Royal Canadian Geographical Society’s magazine) and in a mini documentary, and she’s been chronicling her time on (and under) Bell Island on her website, www.intotheplanet.com. Jill has also shared her underwater photos with the Bell Island Historical Society to create a visual archive.
But how did she find herself visiting a small island off the Avalon Peninsula in the first place? Back in 2013, Jill and her husband were biking from Vancouver, BC to St. John’s, NL to promote water literacy. They contacted Ocean Quest Adventures, a company that offers dives and boat tours, to arrange finishing their ride at that location and “they totally swept me into their family!” she recalls.
That’s when Jill learned about the Bell Island mines and the WWII shipwrecks. In 1942, there were two German U-boat attacks that sank the SS Saganaga, SS Lord Strathcona, SS Rose Castle and the PLM 27, a Free French vessel. They were targeted because they were ore carriers, vital to the Allies’ war effort.

The remains of these ships, which have turned into dazzling artificial reefs, have long been popular with divers. Jill vowed to return one day and dive the wrecks. Not only did she keep that promise, but also she’s returned several times since. Her most recent trip, exploring the mines and wrecks with Mine Quest, was named a 2016 Expedition of the Year by the Royal Canadian Geographical Society.
“They were very excited because Newfoundland is sometimes underrepresented in our stories of Canadian geography. And certainly, what’s underwater in Newfoundland had not been talked about much in the media. And this was a great opportunity to share this part of Canada with the rest of Canada and the world, and that’s really exciting to me,” says Jill.

“I set up this project for the Royal Canadian Geographical Society because I wanted to share the story with all Canadians about what I call the hidden geography of Canada, this incredible cultural history story about the people of Bell Island, about the wrecks and the mine.”

The mines were recently opened up for dives, arranged through Ocean Quest Adventure Resort.
When it comes to planet earth, there’s still plenty left to explore - a fact not lost on Jill. “We know more about space than we do about our underwater world here right on earth. But also, as Canadians, there’s so many corners of this great country that have not been fully explored,” says Jill. “Our geography is so diverse and much of it has not been seen by man on foot or by canoe, so it’s exciting.” - By Elizabeth Whitten

Click here to watch "The Hidden Geography of Newfoundland," including footage shot in the flooded Bell Island mines.