Finding my Voice in Port Rexton 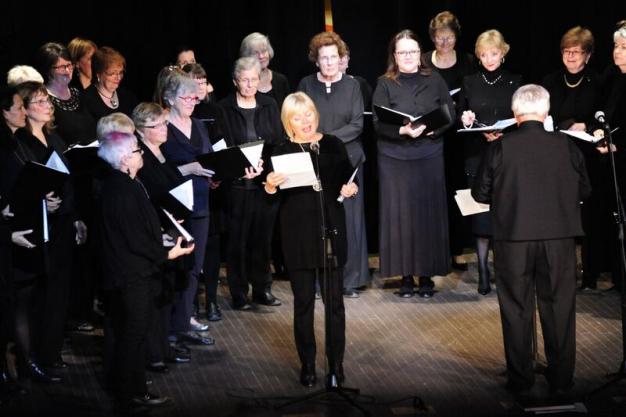 The haunting sounds of the South African folk song "Siyahamba" emerged from the darkened space as forms dressed in black entered and organically formed a semi-circle around a silver-haired man who conducts himself with quiet dignity. On the stage of Bonavista's Garrick Theatre in October 2016, the singers were both deeply present at an individual level, yet lost in the collective moment. As the final notes receded, the combined choir of men and women broke into huge smiles and an appreciative wave of applause washed forth. They clearly struck a chord with the full house audience.

It’s almost impossible to believe that less than five days prior to this performance these people - myself included - were total strangers from all parts of the country, had never sang together, and had never seen the music they would be performing that night.
And in my case at least, this was my “big debut.” The truth is, I had never sung in anything - not a choir, not a glee club, and certainly not a grand concert. In my lifetime, I’ve parachuted, bungee jumped, swam with whales in the open ocean and scuba dived through a torpedo hole in the belly of a sunken ship. Yet the scariest moment I have ever faced, by far,  was waiting in that choir of strangers backstage of the Garrick Theatre to march forth and sing.
So how did I end up there?
Legendary Coasts of Eastern Newfoundland invited me to attend a portion of the five-day choral singing retreat “Come All Ye,” based out of the Fishers’ Loft in Port Rexton, Newfoundland, culminating in that final concert at the Garrick. As a writer, my initial intention was to simply take some photos, chat with participants, immerse myself in the experience as an observer, and watch how the choir of strangers came together in such a short period of time. But before I knew it, I’d been given a songbook and shown the portions of the lyrics the men would be singing. The deer in the headlights look on my face and my polite protests that I was not a singer were met with gentle reassurances that we are all singers and that science shows us that if you can speak, you can sing.

“The whole idea is to get a bunch of people together who like to sing and get them in a situation where they have a great place to work, to hike, good food, good fellowship. There are three or four hours of rehearsal a day and opportunities to do wonderful things and the whole thing becomes a ‘sing-cation,’” Dr. Douglas Dunsmore, the conductor, explained to me.

While finding my voice I also found many friends among the 32 participants who, I discovered, were inspired to take part in the retreat for a wide variety of reasons, some deeply personal.
A number of folks I met had suffered some loss and travelling to sing in this group was a step forward on a new journey that no longer included a loved one.

As he looked out to sea during a break in choir practice at Fishers’ Loft, participant Brad Armstrong said, “I am from Alberta and my wife who passed away last year was from St. John’s and she loved singing as do I…I decided to come and sing in the spirit of my wife. For me it was a nice way to dedicate this time to the spirit of her memory. It makes it very emotional and very personal but the music is very uplifting and inspirational. I think my wife is here in some way through me. She is here in the spirit of song.”

Others were drawn by the simple joy of choral singing. Sitting on a stone bench on a coastal hill, one lady remarked, “I love it here. It is like I am waking up in a postcard every morning to beautiful music.”

As the final concert at the Garrick Theatre came to a close, I couldn’t help but think of the old song made popular by Irish performers Tommy Makem and the Clancy Brothers, “All God’s Creatures Got a Place in the Choir,” which postulates that:

“Some sing low and some sing higher,
Some sing out loud on a telephone wire,
Some just clap their hands, or paws, or anything they've got now.”
As I’ve finally learned, we all have a voice to sing. It is up to us how we use it. - By Dennis Flynn

The Come All Ye retreat is organized by Growing the Voices, a "rolling festival" aiming to make singing available to everyone. Growing the Voices offers a variety of other musical activities, including the "Instant Choir." Click here to find out how you can join the next Instant Choir, happening in St. John's on November 22.

It was wonderful having journalist Dennis Flynn as part of our Come All Ye (CAY) this year. This is one of the many programs we offer at Growing the Voices:Festival 500 - to grow singing everywhere in every way. (CAY) is offered every October. Email growingvoicesnl@gmail.com for more info on our programs or to register.