The Bliss of Being Fortunate Ones 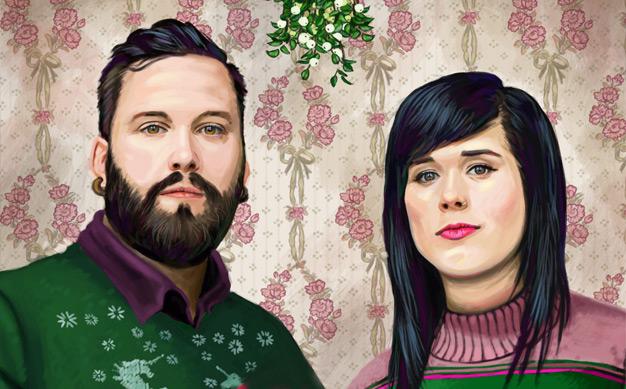 On a Sunday morning you can likely find Andrew James O’Brien and Catherine Allan at home, working their way through a pot of coffee and a feed of toutons and bologna, as Sam Whiffen’s voice flows from the radio, introducing another traditional song on his “Homebrew” show.

The couple are Fortunate Ones, who describe themselves in their Twitter bio as a folky duo; others call them contemporary roots or acoustic pop, or mellow acoustic singer-songwriters. And it’s that last category where they seem to find themselves most comfortable - they aren’t traditional folk, but they are singers who write their own music.
While now in their late 20s and early 30s they profess a deep love of traditional music, it wasn’t always that way.
“Growing up,” says Catherine, “Dad would put on the Sunday morning trad shows on the radio and I would hate it. I would hate it. And now I look forward to it.”
Catherine credits singer Matthew Byrne with opening her ears to the beauty of traditional songs. It took that second listen for her to really appreciate the music.
Trad music wasn’t a part of Andrew’s youth, but these days he’s really loving the old songs.

“It could be the worst kind of day outside, and you hear Sam Whiffen’s voice come on (the radio) on a Sunday morning and you’re like ‘this is awesome.’ It’s one of my favourite times of the week,” he says.

Fortunate Ones music is also on the radio, with two of their singles from their recent album, The Bliss, making it to the top of CBC Radio 2’s Top 20 chart. They don’t play from the traditional or Celtic songbook, but being from this province, the music they make is Newfoundland music, the same way Hey! Rosetta or any of the other contemporary bands creating original songs are Newfoundland music.
“I think the great thing about Newfoundland music is that it’s not a specific genre anymore,” says Andrew.

The two are fiercely proud of where they’re from and have a deep love for home. It’s why, in part, they decided to stay instead of moving to a larger city on the mainland where making a career as a musician might be easier. The travel would definitely be easier, says Catherine. They’ve thought about it, contemplated relocating, but each time the conversation rises it settles again with the agreement that this is home, this is where they belong, and this is where they will stay.

This conversation, like a real-world version of a Clash song, debating the merits of staying or going, is something that tends to come up late at night, says Andrew, as they talk about how the creative people of their generation live a different reality than previous generations.
“We have only experienced the reality of the fact that it’s awesome to be from here,” he says, acknowledging that yes, there was a time when Newfoundlanders who moved away would hide where they were from and the associated feelings of shame or embarrassment that came with being a Newfoundlander.
“But for us, we’ve only ever grown up assuming that the best of everything comes from here. And that, for me, is ‘of course, I live in Newfoundland. It’s the best place on the planet,’” he says. “We live here in spite of the financial and geographical challenges that come up with having to leave to make a living somewhere else. Like, it’s hard for me to imagine not coming back here.”
Their story, the decisions they face, are in many ways similar to those working in the oil industry - do you move away for work, or do you stay and travel for work? Catherine says each time they think about moving away, they just can’t get past the idea of not living in Newfoundland.
“We have thought about moving away,” she says, “because it would make travel easier but just could not get past the notion in our minds; just couldn’t think of living somewhere else. Even though it is challenging, there’s something about living here that’s an inspiring place to live and create.”
On the road again
Being touring musicians means, well, touring. A lot. This past summer, there was one period where they were home for about 48 hours, as they flew in to play the Newfoundland Folk Festival then left again to continue touring the mainland. Catherine cried when she got back to their house in St. John’s, overcome with the emotion of loving home but having to leave again. They spend six months of the year on the road.

As this story is being written, they’re on the road again, doing a tour that will take them from Ontario west to Alberta, through Saskatchewan, and back to Quebec, New Brunswick and Nova Scotia before returning home for a Christmas show in early December, then heading out again for pre-Christmas shows in Ontario and ending in Catherine’s hometown of Corner Brook. This time they’re touring in support of their new six-song Christmas EP, All Will Be Well, which includes two original songs as well as covers of some favourites.

The two have a deep love of all things Christmas, and while it’s quaint to think of a holiday album being recorded under the mistletoe, sung while wearing Christmas sweaters and sipping eggnog, the reality is far different - from selecting and writing songs, to rehearsing, then recording before sending the music off for CD manufacturing, the whole process takes months. In mid-June, Catherine and Andrew were singing and recording Christmas songs.

And before that, while on tour - before rehearsals began for last year’s Christmas shows - they were having a swim in a hotel pool in Toronto when, for a laugh, they belted out "Blue Christmas" in the reverberant indoor swimming pool. It sounded good, so good that they recorded it a capella in their acoustics-friendly dining room, its high ceilings helping to recreate some of that hotel swimming pool reverb. For the other songs, they headed to a studio on Mount Scio Road in St. John’s, where they recorded with producers Don Ellis and Mark Neary, as well as drummer Phil Maloney of Hey! Rosetta, viola and violinist Amelia Curran of The Dardanelles, guitarist Mick Davis of The Novaks and producer/Novaks member Mark Neary on bass. It’s a departure from their usual live show of just the two of them on stage, but then again, the Christmas show - it’s becoming an annual thing - is a departure from their regular show, too.

“The album’s a little more fleshed out than the show we do live,” says Andrew, “but the great thing about the Christmas show [in St. John’s] is we get some of our friends to come play with us, so you’ll hear drums and organ and acoustic and electric guitar, bass, a lot of cool, jangly Christmas-type percussion.”

Catherine even convinced Andrew that they should include a song from her favourite Christmas album, Once Upon a Christmas by Kenny Rogers and Dolly Parton.
“Some say it’s a bit cheesy,” admits Catherine, “but a healthy layer of cheese at Christmas is called for, I think.”
Their version of “Christmas Without You” strips away some of the ’80s production, leaving a beautiful song.
The Fortunate Ones will be bringing their Christmas show to the George Street United Church in St. John’s on December 9 and 10.
The shows, the touring, the recording, the hard work - it’s all part of building a career in music, part of building a following. Through it all - the Music Newfoundland and Labrador Awards, the East Coast Music Awards nominations, the Juno nominations, the Canadian Folk Music Awards wins and nominations - they remain humble. Talk to anyone that knows them, and the first thing you’re likely to hear is something along the lines of “aww, they’re so sweet.” Talk to Catherine and Andrew in person, and you’ll find a genuine pleasure in knowing people pay attention to what they’re doing.
“We’re just happy that people want to talk to us at all,” says Andrew. “It means that things are going right, or something we’re doing is going right.” - By Tobias Romaniuk
Author’s note: I had the good fortune of photographing Fortunate Ones in their home and discussing what they love about their personal space. You can read that story in the winter issue of Home & Cabin.

Who they are and what they play:
Andrew James O’Brien on acoustic guitar, vocals
Catherine Allan on piano, accordion, vocals
Where they’re from:
Andrew grew up in Mount Pearl, Catherine in Corner Brook
While growing up:
Andrew wanted to be a hockey player. Catherine never thought she’d play music in front of a crowd.
The music they were raised on that influenced them:
Catherine - Travelling Wilburys, The Beatles
Andrew - Cat Stevens, Simon and Garfunkel, Billy Joel
How they almost met:
Both Andrew and Catherine attended Grenfell campus of Memorial University at the same time, had mutual friends - like artist Mike Gough, who did the cover illustration on The Bliss album - and went to the same parties, but never met.
How they finally met:
Catherine moved to St. John’s to study French at Memorial; Andrew had moved back to St. John’s and had a band, which Catherine’s brother Mark played in. He brought her to a rehearsal one day. She sang. One thing led to another.
How they measure success:
Happiness and fulfillment - though “the Juno nomination was unbelievable. Friggin’ awesome,” says Catherine.
Praise and recognition for their 2015 album The Bliss:
Nominated, 2016 Juno Award for Contemporary Roots Album of the Year
Nominated, 5 East Coast Music Awards including Album of the Year and Group Recording of the Year
Winner, 4 MusicNL Awards
Winner, 2015 Canadian Folk Music Award for Vocal Group of the Year
Nominated, 2016 International Folk Music Award for Artist of the Year
Two No. 1 singles on CBC Radio 2’s Top 20
Fortunate Ones Holiday Tour Dates:
December 9, 10 - St. John’s, NL
December 14 - Ottawa, ON
December 15 - Peterborough, ON
December 16 - Hamilton, ON
December 17 - Newmarket, ON
December 18 - London, ON
December 23 - Corner Brook, NL