The Sinking of HMS Laurentic 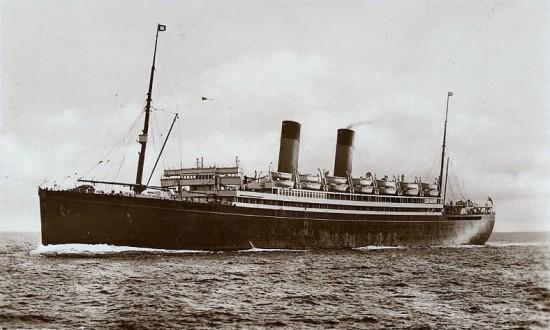 My father, William Lundrigan, loved the ocean as much as anyone could without having fins or gills. As a young boy living a stone’s throw from the North Atlantic in Newfoundland, he spent much time on or around the ocean. In January 1940, at the tender age of 18, having heard the stories of a war raging a world away from his tiny community of Upper Island Cove, he enlisted for service with the British Royal Navy and soon found himself sailing towards Europe, disaster, triumph and the woman who would become his wife and soul mate.

In his six years of active duty he sailed all over Europe, North Africa and along the coasts of Canada and the US, and as far north as Spitsbergen, Norway, the Land of the Midnight Sun. From Malta in the Mediterranean to Murmansk, Russia, he changed ships many times depending on the circumstances of the time. He met my mother, Edith England, while spending some time on shore leave in England. Eventually, they married and had two of their six children while living there, before returning to Newfoundland after the war was over - but that’s another story for another time.
On November 3, 1940, while my father was serving aboard HMS Laurentic somewhere in the Denmark Strait, the German submarine, U-99, torpedoed and sank the Laurentic along with two other Allied ships, HMS Patroclus and the SS Casanare. It took several torpedoes to take the Laurentic down, and during that time the orders were given to abandon ship, which meant everyone needed to get to their assigned life rafts. When my father got to where he was supposed to be, his life raft was gone and he had nowhere to go. In the dark of the night, with the ship listed to one side to such a degree that the water was about to come over the side, he frantically searched for and found a life jacket. My father couldn’t swim. By this time the water was flooding over the side so, looking down into the darkness, he closed his eyes and jumped. After some time in the freezing waters, his comrades came along in a life raft and pulled him aboard.
Meantime the Germans continued to hunt for survivors. Many were shot and killed as they tried to scramble to safety one way or another. Eventually, after many terrifying hours, the U-boat left and the survivors drifted aimlessly as their ship sank below the frigid waters to its final resting place. Bouncing on the unforgiving sea, the life raft was severely overcrowded and, as a result, submerged in the icy waters so that they were all up to their waists in water for 10 hours or so, until the next morning when rescuers came to their aid. Many of his comrades, some who were clinging to the sides of life rafts, became numb with the cold and drifted off into the night, never to be seen again.
Because of the cold water, my father told me he did not have the strength to climb out of the life raft to the rescue vessel and had to be lifted out. He and the others were taken to the warm engine room to thaw out. My father spent two weeks in hospital in Scotland, after which he got his medical clearance and was given a kit-bag and hammock and other supplies and assigned to another ship.
I could probably write for days about his participation in the war and the places he has been, and about my mother and what her family went through (her brother Sid was taken as a POW by the Japanese and died from malnutrition and disease while being used as slave labour building the bridge on the River Kwai). Indeed, their stories of sacrifice, death and triumph have helped me become who I am today. I am so very proud and thankful for his and their efforts, without which the world would, no doubt, be a very different place right now.
I write this not only as a tribute to their efforts at such a pivotal time in the world’s history, but also to stress how much lives are altered post-war. My father would often find himself unable to finish a story about his war experiences, lost in the moments; the present moment and the war moment. I sometimes think he hovered between moments here and there, experiencing the now in one moment and then lost in the past moment that was often too difficult to express. There is a very human cost to war that we sometimes overlook.
My father passed away in November of 2006 and is dearly missed each and every day.
I wrote the following poem to honour my father and all those who suffered throughout that war and other conflicts, and because remembering the stories he told is a way of remembering him. My father left here a few years ago, but sometimes, especially when I am near the ocean or the grassy meadows where he walked and picked berries, I feel his presence. I don’t just remember him in those moments, I feel him; there is a difference.

The Sinking of HMS Laurentic - A Very Human Cost
I sat beside the ocean and listened to the music
That the waves and the rocks made together.
The easiness of the melody lulled me into a state of serenity
And there I gazed off
Far I looked across the blue expanse
To where the ocean became the sky.
Just for a while I sat and stared into the firmament.
Solitude wrapped me in its warm embrace
As I journeyed with my mind back in time
To events my eyes have never seen.

Above the dark North Atlantic I found myself
Looking down from my safe place,
Trying to imagine what it was like
For you and your comrades
As cold and torturous Nazi steel
Made its way to the surface
And injected its death into the cause of liberty.
Into her hull, crippling blows
Heralded the end of HMS Laurentic.
Time slowed to a standstill;
It knew no haste in your peril.

Smoke, screams and fire
Created a private hell on water
As they abandoned their fortress.
As she lay wounded and dying,
Surrendering to her fate,
Her children leave her at last;
Her innards spilling out,
Disemboweled and bleeding into the night.
Ballast barrels bobbed like giant corks
Along the surface of a watery battlefield and grave
That would become her final resting place.

Silent-Otto tallied up the tonnage
As the sailors rowed away; some of them,
Those who were still alive, those who would survive
To relive this night again and again.
As the frigid Atlantic makes numb your very bones
And, as your innocence dies, your tormentors relentlessly
Hunt for easy prey among the barrels and the bodies.
Stubbornly, a mighty ship slips between the icy waves
As her children shriek to their mothers
And to their God to have this cup taken from them,
Wondering why their time had come so soon.

I looked beyond the decades today,
Into the past, and I see you there
A boy of nineteen,
In that overcrowded life-raft,
Half submerged in the unforgiving sea,
Bouncing between life and death,
Touching the face of insanity,
As your friends in that freezing hell drifted away
Silently into the night, never to return;
Never to celebrate the coming victories
As good triumphed over evil.

Dad, I took some time today
To listen for your voice.
It came through in tranquility,
It came through in peace
I heard it in the music of the ocean
And in the silence.
The birds around me
Chirped their liberty song
And fluttered from tree to tree
As the winds of contentment
Gathered around me,
And I felt safe.