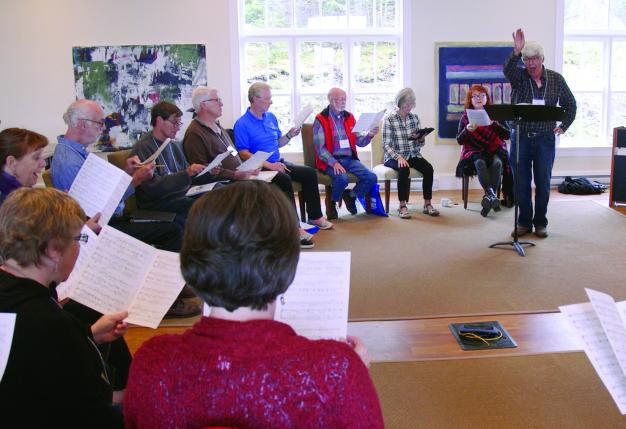 It's not many tourism operations that can literally make their guests sing before the week is out. But Doug Dunsmore can.

A choir conductor with over 30 years experience, Doug is the leader of Come All Ye, a five-day musical retreat hosted at Port Rexton’s Fishers’ Loft. It’s the brainchild of Dr. Susan Knight, chancellor of Memorial University, and founder of Festival 500 and acclaimed youth choir Shallaway. She hired Doug, a friend and colleague, for the inaugural Come All Ye event last year. About 20 people signed up and the feedback was glowing. “They really liked the experience,” Doug recalls, so Susan invited him to take the lead again. This month, October 21-26, a few dozen people will band together under Doug’s leadership to become a choir, which culminates on the final evening at Bonavista’s Garrick Theatre for a public performance.

Doug describes Come All Ye as “a staycation that involves singing.” It brings together a number of people who’ve never met before but are connected by a shared interest in singing. Over the course of five days, Doug will not only be teaching songs, but will also help participants learn how to sing and how to use their vocal chords in a healthy way so that they don’t damage their voices. Doug says participants come with a range of musical abilities, so people who are enthusiastic about having a good time but aren’t professional singers shouldn’t feel intimidated.
“My philosophy on singing is, it sounds kind of simple, but basically singing is 90 per cent brains and 10 per cent talent,” Doug explains.
While participants are working on their individual voices, Doug works on all of them to bring them together as one choral voice. “And how can we do that? Well, we can learn some songs together and we can do this and do that and certainly mould it all together. We basically become a group by the time the five days are over. And the process of the time together is what ends up with the concert. I mean, why have a choir if you’re not going to have some place to sing?”
The program costs $1,390, including meals and accommodations at the Fishers’ Loft, but people can opt to find their own place to stay. The location for the retreat is another incentive for signing up. Beautiful Port Rexton draws plenty of visitors to the area every year. It’s “a perfect place to try this sort of thing, for people who like to be outdoors and like being together with people who are like-minded and friendly, and like to sing and eat and have a good time,” Doug says. Because the retreat takes place in late October, it’s not as busy but there is still much to do and great weather to do it. (Click here for a list of 5 awesome attractions in Port Rexton.)
While the group spends two to three hours a day singing and rehearsing in the Fisher’s Loft conference centre, there’s much more to this event than music. The retreat is a rounded experience, with time built in for relaxation and exploration. Doug describes it as “our own little society for a few days.” Each morning starts with the option of joining a yoga class or taking a hike around town. Then once singing practice is done, the rest of the day is wide open and participants are free to go where they’d like. “It’s fall, but it’s usually very lovely out there.”

Doug is looking forward to getting back to Port Rexton and meeting this year’s crowd of singers. He isn’t sure what type of talent he’s going to be working with this year, which makes it challenging to select what songs the new choir will be performing. One thing he’s already decided is that the song choices won’t be a repeat of last year. “It’s a whole different kettle of fish…It’s going to be something that will be appealing to pretty well anybody who’s an adult, who’s done any listening at all,” he explains. Remember that he’s not just creating a choir, he’s also planning a concert that he hopes will draw a full house on performance night in Bonavista.

“It’s not a ‘come sing Bach, Beethoven, Mozart’ kind of thing. We choose things from cultural experience, and some light and some little bit heavier, and we hope to get people involved in singing,” he says. Last year’s musical selection was a mix of traditional Newfoundland folk songs and popular oldies, like the Beatles’ “Here Comes the Sun.” This year he’s planning on an arrangement that will include music by the late Ron Hynes to mark his passing.

Doug’s reward seems to be working with people who share his love of music, “especially seeing how happy everyone is and how surprised they are that it works. Because it’s not a choir, you’re not bringing in a bunch of pros to do this,” he says. “You’re bringing in people who like to sing. And then when they work together and they become this unit, there’s a real camaraderie. And I just enjoy seeing that develop.” - By Elizabeth Whitten