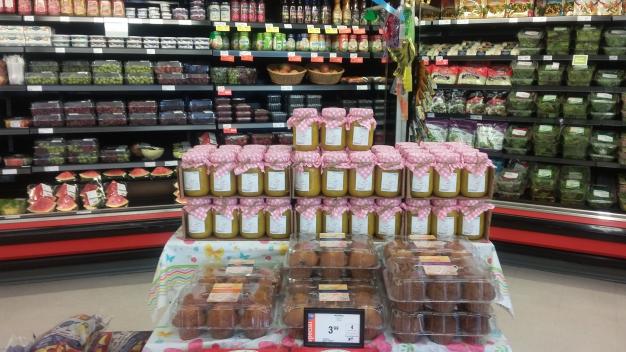 Fourteen-year-old Mitchell Hudson spent most of the summer in the kitchen, hard at work perfecting his great aunt’s sweet pickle recipe. It’s not the typical summer job most students hope to get, but “money is money,” he says. His new business, Aunt Sadie’s Pickles, got its start in June, when Mitchell found himself out of school and unable to find work.

“So my mom decided it would be a good idea to give me an idea to start a job. And then we just decided when the Zest pickles went out, that we would start a different pickle brand,” he says. Considering the mayhem that ensued last March when Smucker Foods discontinued its Zest and Habitant sweet mustard pickles - sending pickle lovers racing to grocery stores to hoard the last few jars - it was a shrewd entrepreneurial idea.

To create the product, Mitchell - who splits his time between the Goulds during the school year and Bloomfield during the summer - turned to a trusted family recipe belonging to his 75-year-old Great Aunt Sadie Way of Flower’s Cove, Newfoundland. Whenever Mitchell’s mom, Darlene Way, whipped up a batch of her aunt’s pickles, she always got compliments and even suggestions that she sell it. She brushed the idea aside - until she realized it was something her son could do.

“So when Mitchell called me, distraught about not getting a job, I said, ‘Well why don’t we explore this?’ And it kind of went crazy,” she laughs.
The operation is Mitchell’s, with his mom stepping in to give advice here and there.
“He comes from a business family. So you know, it’s in the blood. So I kind of give him help when I can and that sort of thing. But he does all the work on it,” says Darlene.
So far, Aunt Sadie's Pickles have been receiving rave reviews, with people saying it tastes pretty close to those sold under the Zest label. Even Newfoundland and Labrador ex-pats living in Alberta, looking for a taste of home, have shown interest in ordering the product.

Sweet Pickle Success
At the moment, many Newfoundlanders and Labradorians who want to taste Aunt Sadie’s Pickles might have some trouble tracking down a jar. Because Mitchell is a one-man operation, he isn’t able to sell the product province-wide. For the time being, customers can find the jars, with their distinctive pink-and-white cloth toppers, mainly at retail locations on the Bonavista Peninsula, and select stores further afield - including at Bidgoods in the Goulds. They will also be available at Christmas at the Glacier, taking place this month in Mount Pearl.
While it all started as a means to earn some extra cash over his summer holidays, Mitchell plans to continue the operation throughout the year, returning to Bloomfield on weekends. He hopes to expand production and perhaps hire on some extra help. It’ll be a busy schedule between balancing schoolwork, a social life and a fledgling business, but Mitchell says he’s up to the challenge.

Much of the money Mitchell has made so far has gone back into the enterprise; he recently invested in an industrial chopper that can cut 25 cabbage heads in five minutes to speed up the cooking process. And there are bigger plans in the works. Mitchell and his mom have dreams of growing their own produce to bring down the cost of the pickles, which currently range in price from $6 to $8, depending on the store.

“We have a big vision, don’t we Mitchell?” Darlene laughs.
And as for Aunt Sadie, Darlene says her aunt thinks it’s great that her pickles are reaching so many people - and she’s eager to try out her great-nephew’s attempt to follow the recipe and see how closely it comes to her own. - By Elizabeth Whitten

Please take mail orders I would love to try your mustard pickles..