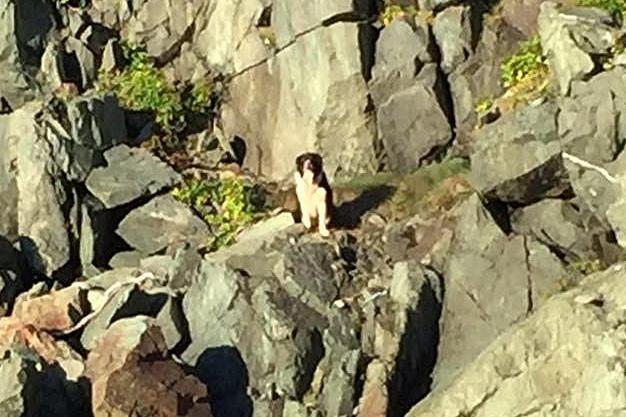 It started out as a regular evening on the water for Grant Young of St. John’s, Newfoundland. The president and publisher of Downhome Publishing Inc. was on the lookout for mackerel in the waters below St. Thomas Line in Conception Bay, but wound up finding a different creature. Hearing a dog barking in the distance, he scanned the shoreline from his boat - until he spotted a forlorn pooch stranded on a steep cliff.

Unable to get close to shore in his boat, Grant snapped a few photos and turned to social media to help track down the dog’s owner. Not long after, he was put in touch with Danielle Lake of Paradise, who thought the dog could be her Border Collie, Askim - missing for nearly two weeks.

Jackie McCormack of Pleas For Paws, a local animal rescue group, also saw Grant's Facebook post and offered to lend a hand. With Jackie aboard, Grant returned to the area where he'd spotted the dog earlier that evening, and Jackie took it from there.

Listen in to this audio clip, as Grant shares how the dog finally made it to safety:

According to Danielle, Askim had run away from home on August 20, when he’d been scared by the sound of fireworks. Since then, Danielle's family had worked tirelessly for any clues as to where her beloved pet might be. She said she was terrified upon seeing Grant’s images, realizing the perilous situation Askim was in.

Considering his time away from the comforts of home, Danielle says Askim appears to be in good health.

Danielle says she gives huge kudos to Grant for his role in the rescue, and also to those on social media who helped bring Askim back home.

“He was crying leaving last night,” says Danielle. “I think he was just so happy to be home.”