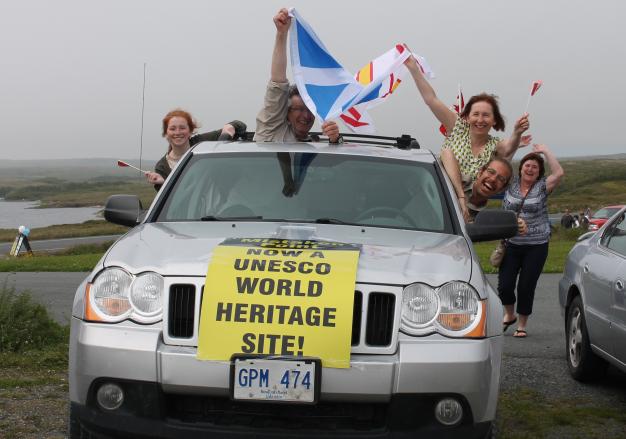 You could forgive some folks in Portugal Cove South if they disturbed anyone with their car horn honking and whoops of joy on an ordinarily quiet Sunday in July. They were celebrating a victory years in the making.
About a year ago, Downhome shared the story of Mistaken Point Ecological Reserve and its bid for UNESCO World Heritage Status. At that time, volunteers, community supporters and government staff had just sent three nomination dossiers to UNESCO - the United Nations Educational, Scientific and Cultural Organization that designates sites of physical and cultural global significance.
The dossiers were complex - 140-pages long with nine appendices. They were years in the making and required collaboration between various communities, volunteers and levels of government.
Mistaken Point is on the southeastern tip of Newfoundland’s Avalon Peninsula, near Portugal Cove South. The reserve is home to more than 10,000 fossil impressions known as Ediacara biota, some of the oldest creatures known in the world that lived over 560 million years ago. Long before they were discovered by geologists, they were legendary to locals who referred to them as the markings on the rocks.

“I have always believed in the magic of this site,” describes an emotional Sharon Porter-Trask, former manager with the Department of Environment and Conservation who was tasked with leading the Mistaken Point UNESCO World Heritage Site bid. “My very first time to Mistaken Point as a park employee, I’m proud to say, was many years ago in 1985 or ’86,” she says. “Little did I know, some 30 years later, I would be leading the world heritage nomination process. It was full circle for me.”
For the last year, everyone involved has been waiting and hoping. On Sunday, July 17, 2016, UNESCO announced from Istanbul, Turkey, that Mistaken Point will become the fourth World Heritage Site in Newfoundland and Labrador. The announcement came less than two days after a failed coup attempt in Turkey where UNESCO was holding its annual meetings. Those scheduled meetings were cut short due to Turkey’s tenuous political situation, but not before the committee designated Mistaken Point as Canada’s 18th World Heritage Site.
“I never ever doubted this would happen,” says Loretta Ryan, chairperson with Mistaken Point Ambassadors Inc. “Now the world knows.”

Thirty members of the community gathered at the Mistaken Point Interpretation Centre to watch the live feed from Turkey starting at 7 a.m. NT. Once they received word, they hopped in their cars and drove through the community honking horns. Everyone was hugging and congratulating each other. The site had been on the tentative list since 2004.  They had done it.

“Even now, still, I can’t believe we actually have it,” says Cynthia Power, former community liaison officer with Mistaken Point Ambassadors Inc. and life-long resident of Portugal Cove South. “I have watched the video of the announcement about 15 times. It’s a wonderful feeling.”

The work will continue. UNESCO World Heritage Status requires rigorous protection and park management and a detailed long-term monitoring cycle that must be shared with UNESCO every six years. UNESCO places economic sustainability alongside environmental and social sustainability. All are achieved through a balance of strong communities and shared culture. In fact, UNESCO has stated in its constitution that local communities must play a key role in the management, preservation and presentation of its World Heritage Sites.
“With the recommendation of inscription, there will probably be some advice from what the evaluators saw,” explains Sharon. “The hope is that the [interpretation] centre they have now will have some kind of expansion so the story can be told to more people… and offer very different experiences, and also they will have the ability to have more interpretative staff available.”

“The most important part of it all from UNESCO’s perspective is community involvement, and that is significant,” says Loretta. “Sometimes we fall into the trap of relying too much on government to hand us a solution…it’s important for communities to be involved in the task of finding solutions and then going to government and saying okay, we think this is important and we need support to make it happen,” says Loretta.
“The World Heritage Site nomination process was a complex one, a process that required determination, commitment and a steadfast certainty that this corner of the world deserves world-class management and acknowledgment,” said the Hon. Perry Trimper, minister of environment and conservation, in a press release. “This commitment has been evident in the work of the community, the MPAI, provincial government staff within Environment and Conservation, colleagues in the Department of Business, Tourism, Culture and Rural Development, as well as within the Federal Government through Parks Canada.”
The success of Mistaken Point goes further than the perceived economic benefits and even beyond the organizers and government staff of this newly appointed UNESCO World Heritage site. “First I think the community felt that, well, this is going to be good for tourism and will economically help the area, but it goes deeper than that for them. There is a real sense of place and pride and a connection. And as an environmental educator, that’s what you strive for,” says Sharon. - By Kristine Power

Click here to go to the website of the CBC to watch the very moment in Turkey when the UNESCO committee granted Mistaken Point heritage status, and the Canadian delegates’ response.
MORE ARTICLES
load more