The More Bees the Better 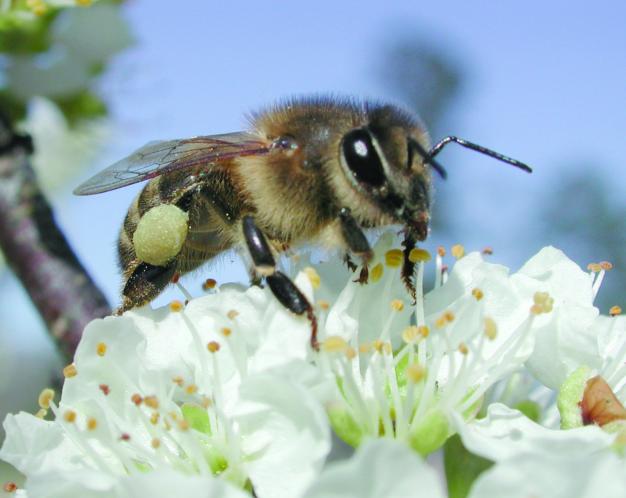 Declining bee populations are making headlines around the world, largely because we rely on bees to pollinate much of the food we eat. Newfoundland and Labrador has many native species of bees and butterflies that are responsible for the pollination of our native plants, ornamental plants and food plants. We would have no bakeapples or blueberries without pollination. Imagine that!

Pollination is the process of moving pollen from the male part of the flower (anther) to the female part of the flower (pistil), which results in fertilization to produce seed. Fruit, some vegetables, seeds (grain), even coffee beans are all the result of flowers being pollinated. Some plants, including corn are wind-pollinated, while others are self- pollinating. But for the most part, pollination is the work of insects - especially bees. When insects feed on the nectar and pollen of the flower, it results in pollination. In Newfoundland and Labrador, sometimes it is cold and wet at blossom time and the pollinating insects are not out and about. In those years, we might experience a poor crop of bakeapples or blueberries as a direct result.
In the garden, we need insects to pollinate vegetables like pumpkin, cucumber, peas and beans. Strawberries, raspberries, currents, gooseberries and tree fruit all depend on pollinating insects to produce a crop. So a healthy environment for pollinating insects is essential for a successful edible garden. That means not using pesticides and planting flowers that attract pollinators.
Some plants have more nectar and pollen in the flower than others and are very good at attracting bees and other pollinating insects. Native plants, by their very nature, attract native pollinating insects. The following are plants, native and non-native, that are especially beneficial for pollinating insects. Adding them to your landscape could go a long way in helping the rest of your garden grow.

Buckwheat
Buckwheat (pictured at top) is a non-native plant used in the garden as a green manure crop (sometimes called a cover crop) to improve soil and attract pollinating insects, especially bees. It as a multipurpose crop. Buckwheat is usually planted in the spring after the danger of frost. It germinates and grows quickly to smother out weeds. After it flowers it is dug into the soil, where it breaks down very quickly to improve the structure of the soil for planting. After harvesting an early crop of vegetables, buckwheat can be planted and later dug into the soil in the fall. In large gardens it can be used in a rotation with other crops to add organic matter to the soil.

Clover
Clovers are a group of plants called legumes that improve the soil by fixing nitrogen in its roots. Clover flowers attract pollinating and other beneficial insects. White clover planted in a lawn will help reduce the amount of fertilizer that you have to use to maintain the grass. Red clover and alsike clover, in association with grass, can be grown in areas that you don’t want to mow or maintain with fertilizer.

Goldenrod
There are several species of native goldenrod. It blooms with yellow flowers in late August and September, brightly visible along highways and in open fields. It is an important source of nectar and pollen for bees and other insects. This perennial plant can be transplanted into the garden as an ornamental. The best time to transplant it is in the early spring, but you will need to mark the location of the plants in the fall when they are blooming because they die back to the ground in the winter.

Fireweed
This native perennial plant has tall spikes of dark pink flowers in late July and August. You can observe this plant in the abundance along highways and in areas where there was a forest fire. It is an important plant for beekeepers who want to produce a very valuable fireweed honey. If you transplant this plant into your garden you have to control it because it spreads quickly by underground shoots. It is best kept in areas like a large open meadow.

Borage
This annual plant, which grows about two feet tall, has unique blue flowers. Both the flowers and the leaves, which have a mild cucumber flavour, are edible. It flowers continuously from midsummer until frost. Borage will seed itself and the plants that come back next year can be easily transplanted. Pollinating insects love this plant.

Butterfly Bush
The name says it all. If you want to attract butterflies to your garden, this is the plant. This shrub has spikes of flowers in various colours that the butterflies, as well as other pollinating insects, love. It is a woody shrub that should be cut back halfway every spring. Flowers are produced on new growth and are quite fragrant.

Lupins
This is another perennial plant for pollinating insects that you sometimes see along highways. It is not native to Newfoundland and Labrador but was introduced. Lupins fix nitrogen in the soil, so they can grow in poor soil. In some places they are considered a weed but there are cultivated varieties that have bright red, pink, yellow and white blossoms. The flower heads should be removed after blooming to prevent them from self-seeding.

Pretty well all flowering plants attract insects. This is just a short list of some of the plants for your garden that attract beneficial insects such as bees and butterflies. If you want to learn more, you can find detailed information about various plants and insects on the Internet, in various books and catalogues, or by talking to local gardening experts. - By Ross Traverse

Ross Traverse has been a horticultural consultant to gardeners and farmers for more than 40 years. His "Down to Earth" column appears in each issue of Downhome.