The dead cannot speak. Without our archive and museums, many stories would never be told. In our archives at the Flying Boat Museum in Botwood, we have small files with tidbits of information about someone or something that is long gone. Some of these files have been there for decades with unanswered questions. Such was the case with Baron Carl Falkenberg. After several investigations over the years, we had learned he was a WWI pilot born in Botwood in 1897. We knew his father was an accountant for the Gooday and Benson Company of Quebec, which ran the Exploits River Lumber and Pulp Company here in Botwood from 1891 to 1904. What happened to this family and where they went after 1904 was a mystery…until now.

Last August, we received a call from Kristen McNaule, with Sound Venture Productions in Ottawa, regarding Baron Carl Falkenberg. She explained that Sound Venture Productions, in partnership with The Royal Canadian Geographical Society, was doing a collaborative documentary project, “Drawn to Victory,” the first installment of a commemorative First World War initiative, A Nation Soars. For the second installment, “Wings of Courage,” they were profiling six WWI flying aces from across Canada, including Baron Carl Falkenberg. Bob Barrett, director of the documentary series, was coming to Botwood in September to film the town and interview local historians regarding Carl Falkenberg’s early life. It was time to blow the dust off the Falkenberg file again and see what secrets it may give up to us this time.
After many hours of researching, inquiring, looking over hundreds of photos, records and the Internet, we finally connected with Carl Falkenberg’s great-nephew, Peter Falkenberg Brown, in Maine, USA. He led us to Carl Falkenberg’s grandson, Tim Falkenberg, in Whitehorse, YK, who then connected us with four of Carl’s surviving children: sons Andreas, Eric and John, and only daughter, Dagmar. Since that time, the items and information given to us by the Falkenbergs, the connections we have made, the stories we have been told and have read regarding this family, have been incredible.
The Falkenberg family throughout time have rubbed elbows with some of the most influential people in the history of Europe, America, Canada and Newfoundland. Their history reads like a novel full of kings and queens, heroes and pioneers. We could not possibly tell the story of WWI flying ace Carl Falkenberg without telling the story of his family.

The Falkenberg Legacy
Born the grandson of Baron Gerhard “Knut” Alfrid Falkenberg (the first Swedish consul to British North America from 1855-1873 in Quebec), Carl inherited his grandfather's title of nobility through his father, Baron Frederick Falkenberg (one-time Vice Consul to British North America).
Carl’s parents, Baron Frederick Falkenberg and Baroness Helen Dean Falkenberg, married in Quebec in 1893, and by 1894 they were living in Botwoodville, Newfoundland. Frederick worked as the accountant for the mill of Gooday & Benson of Montreal, which ran the Exploits River Lumber and Pulp Company in Botwoodville from 1894 to around 1904. 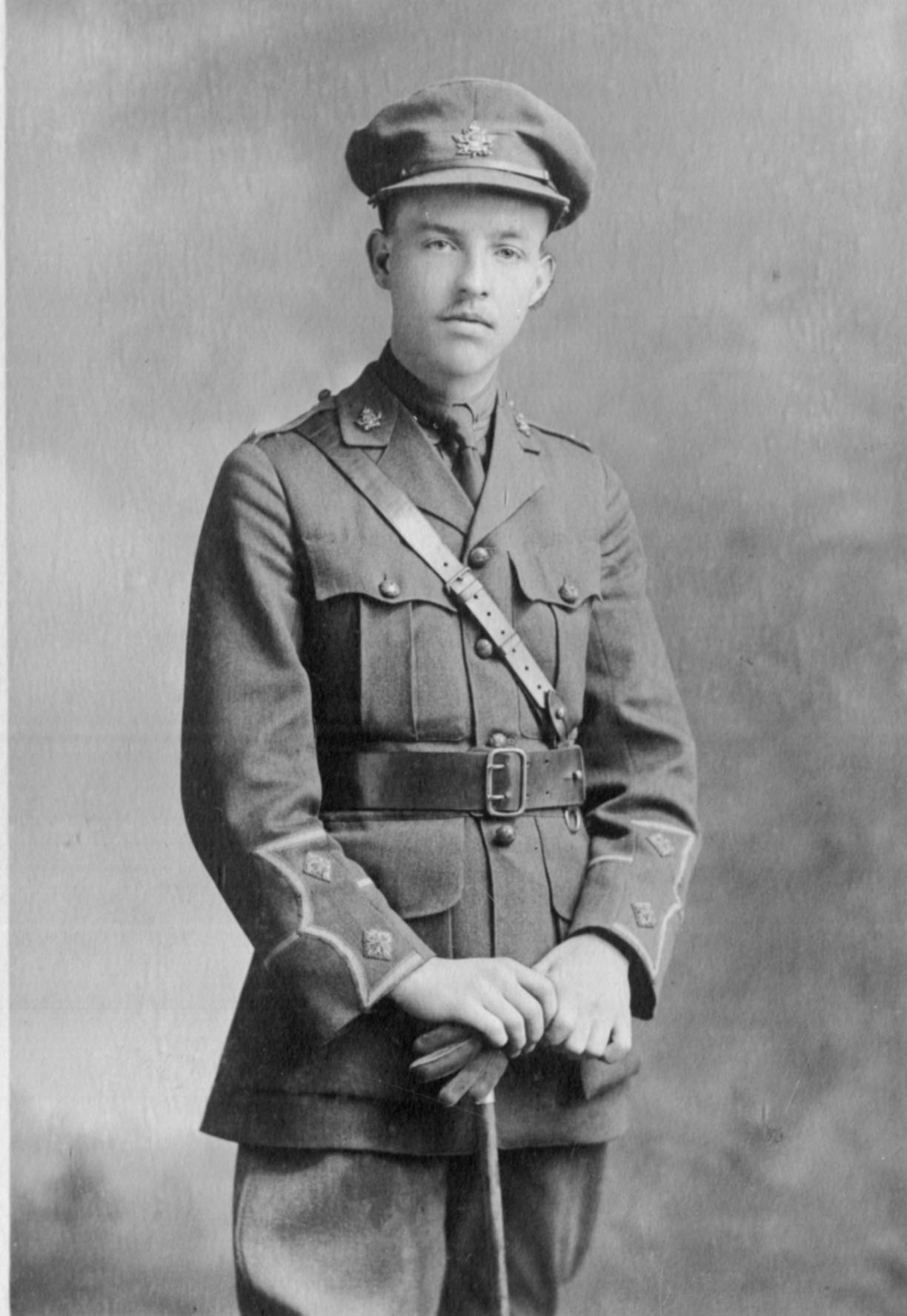 Carl Falkenberg first enlisted with the Royal Rifles of Quebec in the fall of 1912, before his 16th birthday. He served continuously until the regiment was called up in March 1916 to join the Canadian Expeditionary Forces. Lieutenant Falkenberg was posted to the 171st Battalion and sent overseas four months later. Reassigned to the 14th Battalion in October, he was badly wounded on November 27, 1916. After six months in an English hospital, he transferred to the Royal Flying Corps in June 1917. In March 1918, he joined 84 Squadron under Sholto Douglas, flying the S.E.5a in combat.
On May 10, 1918, Carl was wounded for the second time. Promoted to captain in September 1918, he then commanded “B” flight until the Armistice. When Carl returned to England, he transferred to the Royal Canadian Air Force and served as a flight commander with 1 Fighter Squadron until his discharge on October 18, 1919. As a combat pilot, Baron Carl became a flying ace. His 18 victories earned him the Distinguished Flying Cross (DFC) and the Distinguished Flying Cross (DFC) Bar; the Allied Victory Medal and the Coronation Medal. During this time, he witnessed the recovery and examination of the plane and body of Manfred Albrecht Freiherr von Richthofen - a.k.a. the Red Baron - and wrote about this in his personal collection of stories.
In 1932, Carl met Emma Marguerite Roy in Paris, France. She was the daughter of Hon. Dr. Philippe Roy, Canadian Minister to France, and Elizabeth Helene “Birdie” Young. They married in Saint John, New Brunswick on December 3, 1933, and went on to have five sons (Philippe, Andreas, Eric, Georges, John) and one daughter, Dagmar.
At the outbreak of WWII, Carl took over the Montreal Recruiting Centre for eight months, was then posted to Senior Officer Administrator at Trenton and then to camp Borden as the Senior Administrative Officer until 1941. He was then posted to No. 4 Training Command Headquarters in Regina as Senior Organization Staff Officer and there he was promoted to Wing Commander. In the fall of 1943, he was made Commanding Officer of Regina No. 2 Initial Training School until the end of the war.  During this time he was awarded the Cock of the Walk trophy; the Minister’s Efficiency Pennant and the Efficiency Decoration (Canada).

New Baron Falkenberg Exhibit
On July 9, the Botwood Heritage Society welcomes Carl Falkenberg home with a new and exciting exhibit. The Falkenberg family have loaned the Botwood Heritage Society some very historical and personal items to display at our museums, most of which have never been shown in public. They include a 160-year-old dress uniform worn by Baron Gerhard “Knut” Alfrid Falkenberg when he was the Swedish consul, including the sword, hat, medals and a copy of the diary he kept of his trip from Sweden to New York when he fled in 1841 for political exile. We have all of Carl Falkenberg’s WWI and WWII medals, citations, awards, personal papers and photos (one shows him at a table with Charles Lindbergh at the Quebec Garrison Club in 1928; another shows him with Canada’s top WWI flying Ace, Billy Bishop, whom he knew very well and joined on many forays in France in 1918).
Among our guests on July 9 will be Carl Falkenberg’s four remaining children and other family members. There are even whispers of a possible Falkenberg family reunion here at that time.

From speaking with his surviving children, reading letters and diaries, and looking over photos and documents, it is clear that of all the things Carl Falkenberg had done in life, he felt his greatest accomplishments were being a husband and father. He took pride in watching his children and grandchildren grow. He taught his sons to fish and shoot ducks, something he had a passion for. He doted on his only daughter and gardened with his wife, lovingly referred to as “Mum” in his papers. Carl’s sons say their father was their buddy; they and their friends could arrive home at anytime during the day or night and Carl would sit with them, talking and sharing a story or two. His father spoke of WWI, but more about the friendships he made and a few stories of his flying. He never spoke much of the brutality he witnessed.