The Charm of Campbell House 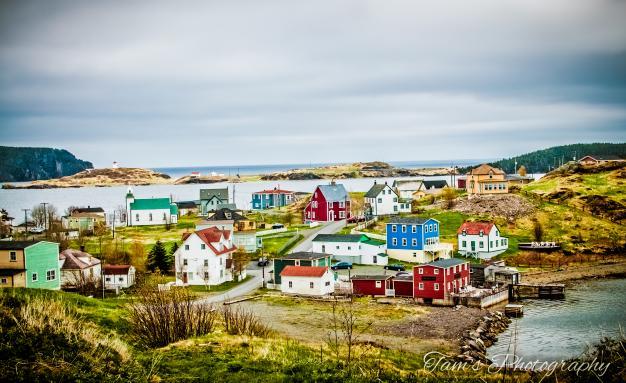 My most memorable moment from last year came upon me rather unexpectedly, and I imagine that it will stay with me for the rest of my life. The summer of 2015 was finally time for me to bring a few of my dearest friends to visit my homeland of Newfoundland and Labrador. My childhood haunts of Grand Falls-Windsor, Badger Lake and St. John’s would definitely be among our destinations, but I also knew that a visit to an outport was essential to their capturing the essence of this island and its people. Trinity sounded ideal, so it was added to the itinerary. Little did I predict the force of this old settlement by the bay.

The eight of us, including my American husband and six New Jerseyans, arrived in Trinity in time for the season’s first pageant. The sun shone as we followed the actors into backyards and churchyards, and through centuries-old footpaths to fish flakes along the shore. We were tickled pink to tour the village through the eyes of history.

Following the outdoor performance, we wandered past picket fences to find the Artisan Inn, where we had reserved two 19th-century fishing cottages. Tineke and Judy welcomed us, and led us up the hill to one of our historic quarters, Campbell House. I followed the others in through the door, turned to glance at the kitchen to the right, and instantly lost my breath. How could this old house with low ceilings, in a place I had never visited, cause such a visceral response in me? Yet suddenly, my tears were like Newfoundlanders coming in for a cup of tea - no invitation necessary, and all guests warmly welcomed. I felt as if each tear was bridging a bond to those who had come before me.

Looking around the room, there were old pieces of china and delftware - the same kind that I used to see in my grandmother’s houses. My grandfather had been a sea captain; had he brought delftware home from a voyage to Holland? I found myself suddenly wondering whatever happened to those blue and white dishes.

My American home has always displayed a few plates, many with their own stories. But the plates, sugar bowls and creamers of Campbell House were speaking to me.

The white enamel stove in the corner of this Trinity home, and the nearby table and chairs, whispered to me of olden days, long before my time. I could almost smell gingerbread baking in the wood-fired oven. Hard lives, with their joy and their grief, were lived within these walls.

Everything in the room invited feelings of childhood contentment from my long-ago visits to aunts and uncles, grandmothers and grandfathers. In my early years I had studied the pictures, dishes, white ruffled nylon curtains and 25th anniversary knickknacks that filled their houses. I not only remembered these things, suddenly now I could feel them with the wonder of a young child. Yes, I learned, they are still a part of me.

Somehow, while looking at the sweet little shelves to the side of the old brick hearth, my present - living in the US, travelling through Newfoundland with my cherished husband and my American friends - seemed to joyfully, weepily collide with the world of my relatives and their ancestors before them. All this in the kitchen of a tiny cottage beside the sea.

My companions tossed tender glances at me. I could only speak with the tears that seemed to know no end. Each room of that house went on to please me to my very core.

Nowadays I smile at what happened to me in Trinity’s Campbell House. I had recaptured my childhood, a sense of my heritage, joy for my life and a dream for my future - all in an instant. I had led my friends on a Newfoundland adventure, but had unearthed a truth about myself.

This Newfoundlander/Canadian/American won’t be letting go of that anytime soon. - Submitted by Josette Kenny Abruzzini of Lake Winola, Pennslyvania, USA