The Ultimate Gift: What's a Kidney Between Friends?

Stewart (left) and Nathan pose with NLFA's Farmers Helping Farmers sign on a recent visit to the Federation office.

While they’ve only known each other for a little over seven years, Nathan Dennis of Piccadilly and Stewart King of Portugal Cove-St. Philip’s share a special bond, one stronger than many friends develop over a lifetime. Nathan works at Headline Holsteins, a dairy operation, and operates his own vegetable and hay business. Stewart grows hay and raises beef cattle. When the two farmers met at the Newfoundland and Labrador Federation of Agriculture (NLFA) Annual Meeting back in 2009, they couldn’t have predicted how their lives would one day become intertwined.

A Friend in Need
Stewart, 52, has been coping with Polycystic Kidney Disease (PKD) for about 15 years. While the condition was fairly manageable for the first few years, it grew worse over time. By 2015, Stewart was taking four hours of dialysis treatments three times a week, resulting in a very restricted lifestyle and a diminished quality of life. Stewart was in desperate need of a kidney transplant.
The first person to be tested for organ donation was Stewart’s wife, Daphne. When it was determined she wouldn’t be a suitable donor, his farmer friend, 28-year-old Nathan, stepped up to the plate.
After discussing the idea with his girlfriend, Ashley, who was supportive, in January 2015, Nathan called Daphne to see if she thought Stewart would be interested. Her response was enthusiastic, comparing the offer to throwing a lifeline to a drowning man. From that point, things began to move forward.
In the year leading up to the surgery, there were many tests and consultations. Since Nathan lives on the west coast of the island and Stewart on the east coast, they dealt with two transplant coordinators, one in Corner Brook and one in St. John’s.
First, Nathan had to go through a battery of tests to make sure he was healthy enough to be a donor.
“There were so many needles put in me that I felt like a pin cushion,” says Nathan.

Stewart had to go through a similar litany of tests, which happened under the direction of his nephrologist (kidney specialist) Dr. Maureen Hannaford.

Stewart and Nathan kept passing the various tests and finally the procedure was approved. While most people would be apprehensive about such a surgery, Nathan took a fairly relaxed approach. Though he recognized that it was a major operation, he said he didn’t consider it much of a bigger deal than giving blood. He even joked that the many needles he had in the testing phase were worse than the surgery.
Stewart wasn’t nervous going into it, either, but says he believes Daphne may have been a bit worried. 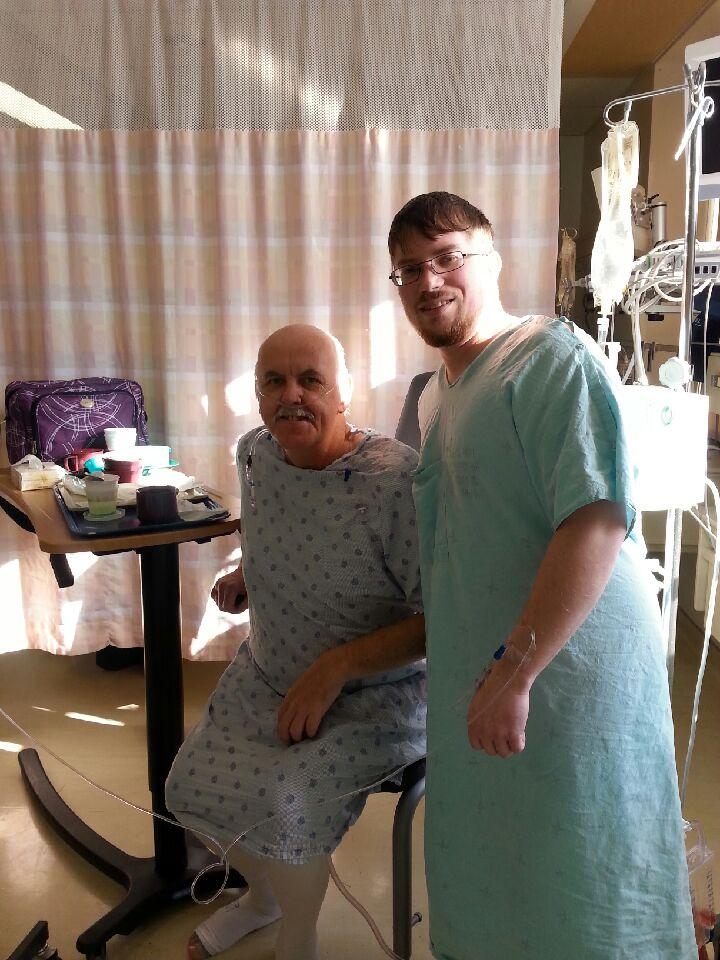 Good Deed Done
Stewart had his last dialysis on January 20, 2016, and the surgery took place the following day at the Queen Elizabeth II (QEII) Hospital in Halifax, Nova Scotia. The procedure was a complete success - the kidney started working right on the operating table.

After the surgery, other than some tenderness, Stewart felt great. Soon he was up walking around the hospital. His energy has returned; he has no need for dialysis; he is able to eat a much less restrictive diet; and for the first time in 15 years, he doesn’t have to take a blood pressure pill. Stewart arrived home from Halifax on his birthday, gratefully noting that his new kidney was quite a gift!

Nathan is also doing quite well. Following the operation, he was not allowed to lift anything over 15 lbs, though he’d often forget and almost get himself into trouble. The experience has given him a great deal of satisfaction, knowing that he was able to help a friend in need.

Nathan and Stewart are keenly aware of the NLFA’s motto: farmers helping farmers. As Nathan puts it, “We were taking it to the next level.”

Stewart would like to send out a special thank you to surgeon Dr. Mark Walsh and the staff on floor 6B of the QEII, as well as everyone who helped him over the years, including his family, friends, fellow farmers, the medical staff in both provinces - and especially Nathan, who gave him a new lease on life. - Submitted by Matthew Carlson