Bob Bartlett: Adventurer of the North 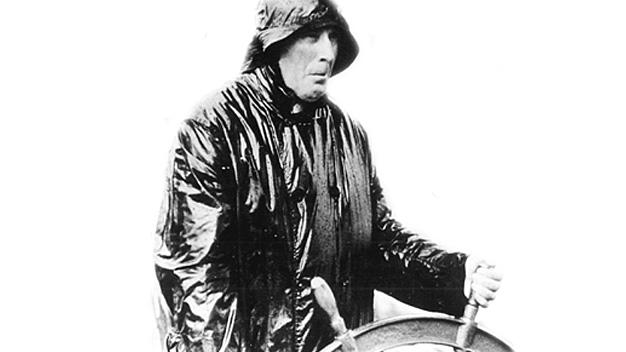 They probably don't make them anymore like Captain Bob Bartlett of Brigus, Newfoundland. He spent more than 50 years on the ocean as a sailor, made 40 trips as ship's master to the Arctic - more than anyone before or since - and was shipwrecked 12 times. Legendary, I believe, is the word for such a career.

Born on August 15, 1875, Bartlett grew up in Hawthorne Cottage in Brigus with nine of his siblings. His mother wanted Bob to be a minister and sent him to Methodist College at the age of 16. He turned out to have other ambitions.

In 1893, at the age of 17, he was given temporary command of his father’s schooner, Osprey, which he sailed to the Labrador coast to fish. His venture was profitable and the adventure convinced him to become a master mariner instead of a minister.

To get a master mariner’s ticket required lots of experience at sea, so the young Bartlett signed on as ordinary seaman with the merchant vessel Corisande, due to leave St. John’s that October with a shipment of fish for Brazil. After that Bartlett spent a number of years aboard merchant vessels in the fall and winter, and spent the spring and summer sealing and fishing.

Race to the North Pole
After passing the master mariner’s exam and getting his captain’s ticket in 1898, rather than captain a merchant ship, Bob signed with his uncle, John Bartlett, as first mate on the Windward, which was carrying Robert Peary on his first attempt to reach the North Pole. The ship got frozen in ice 300 miles south of Ellesmere Island, the most northerly point of land that they were trying to reach. Peary lost eight of his toes to frostbite trying to finish the trek over land. He was unsuccessful, yet undeterred.

For the next four springs, Bartlett returned to sealing. He had a rough time as all his trips, as first mate and as captain, were unsuccessful. Then in 1905, Admiral Peary came calling. He asked Bartlett to captain the Roosevelt, for another attempt to reach the North Pole. Bartlett got Peary to the Arctic Ocean as promised that year, and he spent the winter cutting gaps through the ice ridges big enough to accommodate their sledges. That winter, Peary made it farther north than any white man had been before, getting to within 200 miles of the pole, where Peary was forced to turn back because of his dogs’ condition, his condition and low food supplies.

The following year, Bartlett commanded the sealing vessel Leopard, which was wrecked and the voyage was a total loss.

In 1908, Peary made yet another attempt to reach the North Pole in the Roosevelt, again with Bartlett at the helm, and with the agreement that Bartlett would accompany the admiral to the Pole. But when they were within 150 miles, Peary changed his mind and left Bartlett behind, taking only his servant Matt Hensen with him. Some historians opine that the reason Bartlett was left behind was because he was a Newfoundlander, and therefore a British subject. If Bartlett made it, Britain could share the honours of being first to reach the pole. Some suggest the reason was because Peary didn’t want a witness, in case he didn’t make it. He had spent most of his life trying to reach the Pole and was now over 50, while Bartlett was in his 20s. Whether that was the reason or not, most historians now believe that Peary didn’t reach his goal on April 6, 1909, as he had claimed.

In spite of the fact that he didn’t make it to the pole, Bartlett’s exploits on board ships and on the treacherous ice made him instantly famous in the United States and Britain.

Near Death on the Karluk
In 1913, Bartlett was asked by the Canadian government to take an expedition to the Arctic Ocean from Canada’s west coast in an old whaling ship, the Karluk. Bartlett was to drop explorers at Hershell off the coast of the Yukon and get back before winter set in. However, that year winter came early to the Arctic Ocean and the Karluk became trapped in a huge ice floe, which for months drifted westward until the Karluk reached the edge of the ice field off the coast of Siberia. Stranded in the middle of the giant ice pan, Bartlett, along with the 25 crew and passengers, stripped everything necessary from the Karluk in case the ice would crush the ship and sink her.

Several months later, the ice did indeed crush the ship. As the ship was sinking, Captain Bartlett remained on board playing his classical records on the old phonograph. As each record finished playing, he threw it in the stove. At last, with the phonograph playing Chopin’s “Funeral March,” the captain jumped over the rail just before the ship went under, and saluted as the Karluk sank to the bottom below the ice.

It would be dark day and night until the sun came back to the Arctic, so while they were waiting to start the trek to Wrangel Island, about 60 miles to the west, Bartlett sent groups of men and dog teams along the ice toward Wrangel to leave caches of supplies, which the group could pick up when they made the journey in daylight. When they finally left “Shipwreck Camp,” the name Bartlett had given the encampment, they left two tons of food and most of their fuel behind.

On the journey to Wrangel they were met with literally mountainous obstacles. Some of the rafted ice ridges along the way were so big they, at times, spent up to a week getting through one ridge using picks and shovels.

When they finally got to Wrangel, the ice between the island and Siberia was starting to break up. Instead of taking everyone, which included an Inuit woman and her two young children, with him over the dangerous ice, he took an Inuit man, Kataktovick, and a team of dogs to get help for the rest. The trip to the coast of Siberia, 100 miles away, was the most treacherous part of their journey. They encountered not only more ice ridges, but open leads of water between pans that were so wide the dogs, sled and men barely made it across.

The two walked across the ice to the coast of Siberia and south along the coast to the Bering Strait (a journey of 700 miles), where Bartlett finally made it to Alaska. From there he was able to get the cutter, Bear, to take him back to Wrangel.

As they approached Wrangel, they met the King and Winge, a small ship that had picked up the survivors the day before. His old shipmates joined him on the Bear, where they got medical attention and made it safely home.

This expedition made Bartlett even more famous. Canadian marine historian Thomas Appleton called the expedition, “the finest example of leadership in the maritime history of Canada.”

As he had done after previous expeditions, Bartlett returned to sealing for a few years. Then in 1925, he bought the Effie M. Morrissey from his cousin Harold Bartlett. Captain Bob installed an auxiliary engine and reinforced the hull of the ship so it could withstand heavy ice. He spent the next two decades in Arctic exploration. His final trip in 1945 took him to northwest Greenland supplying and servicing U.S. military bases.

Captain Robert Bartlett passed away in New York on April 28, 1946.

Among the ten medals and citations Bartlett received over the years was the Hubbard Medal, awarded by the National Geographic Society. Headquartered in Washington, D.C. the society is one of the largest non-profit scientific and educational institutions in the world. The award is so prestigious that it was awarded only 23 times in the 104 years between the first one in 1906 to the most recent in 2010. Captain Bob Bartlett’s name is on a privileged list that also includes aviation pioneer Charles Lindberg, and astronauts John Glen, Neil Armstrong, Edwin “Buzz” Aldrin and Michael Collins. - By Ron Young

Ron Young is a retired policeman, published poet and founding editor of Downhome.