A Twist on Summer Strawberries 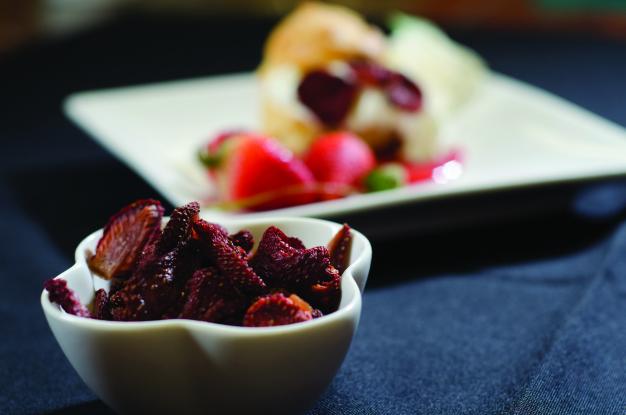 Last summer in Newfoundland was a challenging one for farmers, so I'm hoping for a banner season this year. I love to eat seasonally, but it's also great fun to conserve seasonal produce for use later. With berries, we often turn to jamming or freezing them; however, dehydrating them produces a treat akin to candy. You can eat them as they are or add them to salads, cookies, muffins or other treats.

The best part is you don’t need any special equipment - the lowest setting on your regular oven will do the trick. In fact, even though I have a dehydrator, I prefer the oven method for strawberries because I want to retain a chewy, raisin-like texture, rather than create a completely dried, crisp chip. The drying time takes 2-3 hours, depending on the moisture content and size of the berries, so it’s best to check them periodically during the process to get the result you like.

Although they have no added sugar, the chewy, sweet strawberries are more delicious than the best red licorice candy I have ever had. Try them and see if you agree!

Dried Strawberries
1 lb fresh local strawberries (or more - might as well do loads while you are at it!)
Sea or kosher salt
Set the oven temperature to 200°F. If yours is a convection oven, turn off the fan. Rinse and dry the strawberries. Remove the stems and cut small- to medium-sized berries in half; cut larger ones in quarters. Aim to have the pieces approximately the same size so they dry evenly. Spread them cut-side up on a parchment-lined baking sheet. Sprinkle with a small amount of salt. This helps the drying and balances the flavour of the finished berries. Place the pan in the oven and check on them in 45 minutes. You will notice beads of moisture and berries will still likely be moist. If they appear dry, go ahead and turn each berry over at this point. If not, continue dehydrating until you see the colour of the cut side darken, shrivel and begin to look leathery - but not browned or baked looking. I flipped mine after an hour or so. Turn the berries over and move them so that they are not on the same little spot on the parchment - there is a bit of moisture there. Sprinkle this side with a pinch of salt and continue the drying process, checking periodically. For chewy raisin-like texture, you want to stop dehydrating while they are still pliable - remembering they will dry a little more as they cool.
When done, remove from the oven and transfer to a fine mesh cooling rack for 10-15 minutes to finish drying and cooling. Store in an airtight container - if you can resist gobbling them up right away! A few of the larger pieces of the strawberries I dried were a little moister than others, so I chose to store them in the fridge, just in case. And if you love the dried strawberries, try my recipe for Fruit Leather - another easy and delicious snack to make.