Who Was The Fighting Newfoundlander? 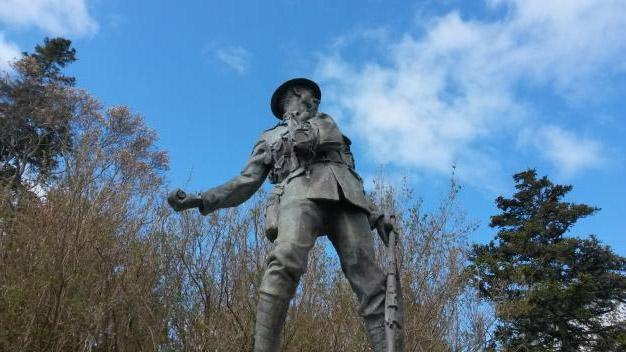 Quite the crowd turned up to Bowring Park, St. John's on June 2 for the unveiling of a storyboard that shares the history of The Fighting Newfoundlander statue. While many people have walked by the statue of The Fighting Newfoundlander in its 94-year history, most likely weren’t aware of how the statue came to be - until now. Situated in the heart of the park, the storyboard explains who created the sculpture and who the subject was.

Corporal Thomas Ambrose Pittman of Little Bay East, Newfoundland enlisted for duty in the First World War on July 24, 1915 and sailed to Europe that October. In 1918 Pittman was stationed in England when he was told by a commanding officer to get into his full battle gear and head to the Manchester School of Art.

Captain Basil Gotto, an artist, had selected Pittman to be the model for a new statue he was creating. For two months, Pittman posed with his arm preparing to throw a grenade. His fellow soldiers took to visiting him and dubbed him “The Fighting Newfoundlander.” The name stuck.

The storyboard was warmly welcomed by the people gathered and there were plenty of poppies and forget-me-not pins in the crowd. The Royal Newfoundland Regiment Band performed during the event, which was attended by military officers, the Royal Newfoundland Constabulary and their horses, Lieutenant Governor Frank Fagan, Deputy-Mayor Ron Ellsworth and other dignitaries. - By Elizabeth Whitten