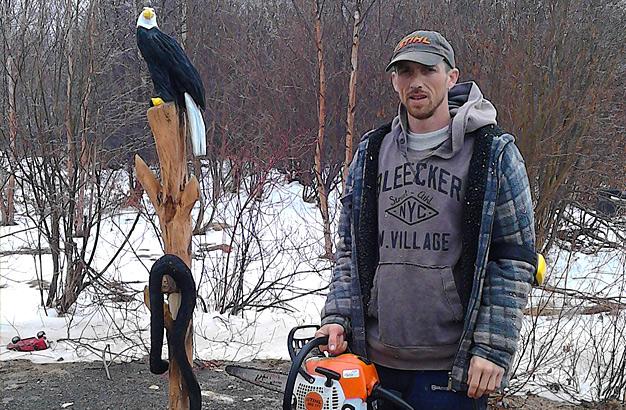 Anyone driving by Corey Chaulk's home in Rodgers Cove, Gander Bay, Newfoundland might see a group of people standing around outside, watching him at work. From 10 a.m. until suppertime, Corey can typically be found on his front lawn carving sculptures from wood. What makes it a spectacle is his unusual tool of choice: A chainsaw.

“I wake up in the mornings and put on my work gear and just go outside,” says Corey. Rain or shine he goes about his work, accompanied by the roar of a power tool.
Corey picked up woodworking five years ago, when he started out whittling with a pocketknife as a way to relax. When he saw people using chainsaws for carving on television, he says he had to try it for himself.
“I know a few local guys in Newfoundland doing it, too, so I tried it and been at it ever since,” he says.
In the beginning, the hobby kept Corey busy during the off months when he wasn’t working in Alberta.
“I’d usually go away for five months in the winter and come home all summer and do my carving, right. But no work this year,” says Corey. So he’s been honing his skill full-time since March.
“Just like a guitar player, you’ve got to be doing it every day if you want to get better. A lot of my pieces are not perfect, but gradually over time I’m hoping to get better,” says Corey.
Since picking up the chainsaw, Corey says he’s made several hundred sculptures. Sometimes he sells the carvings and other times he gives them away to charities to auction off. Corey estimates he’s given away thousands of dollars worth of his work thus far.
“It’s still really a hobby. I mean, it’s not making me any money, that’s for sure - at least not around here,” says Corey. “I’m just doing it because I love it.” 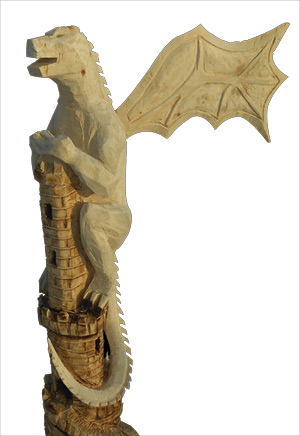 At the moment, Corey’s home is a menagerie of creatures: a few bears, a dragon on a castle, and flocks of birds perched in his kitchen. While he’s carved a wide variety of species, he says he enjoys creating eagles most of all.

“I love the end product. And I love when people come in and say, ‘That’s beautiful,’” says Corey.
The average eagle sculpture takes him two days from start to finish, while a larger, more detailed piece could take three to four days to complete - requiring a great deal of patience and commitment.
Corey recalls one particularly difficult piece that began with a 10-foot log and almost ended with him throwing in the towel.
“I made a couple cuts and almost lost all interest, all hope for it…I became so close to just pushing over the log and giving up,” says Corey. “It’s easier to give up than push forward…I kept my ground and stayed carving and before I knew it, I had this huge dragon, standing on a castle, with wings. It was amazing! So if I learned anything, it’s never give up.” - By Elizabeth Whitten