The Tour of Honour 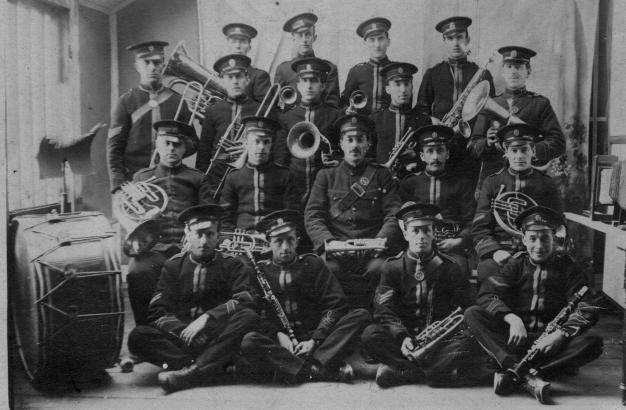 When WWI was declared and King George called for recruits, the Church Lads' Brigade (CLB) answered. In fact, the very first Newfoundlander to enlist, Leonard T. Stick, was a member of the CLB. More than 500 members of the organization would eventually enlist to fight overseas. And when the Blue Puttees sailed to England on the SS Florizel in 1914, the CLB Regimental Band saw them off.

This organization gave a "disproportionate amount of people and resources and whatever they had," says Steven Rowe, President of the Executive, CLB Regimental Band. For instance, the CLB provided tents and guns, and volunteered the use of its Armoury in St. John's as the regimental headquarters and recruitment centre. While making the first 500 soldiers’ uniforms, the military ran out of khaki for the lower leg wrappings. Blue material from the CLB Quartermaster’s Stores was substituted, and the now-iconic “Blue Puttees” were born.
July 1 marks 100 years since the Battle of Beaumont-Hamel, which decimated the Newfoundland Regiment by reducing the force to just 68 able men. A devastating 324 individuals were killed or declared missing, and a further 386 were wounded.
To mark the sombre occasion, around 30 members of the CLB Regimental Band, plus an Honour Guard made up of 16 teen members of the CLB, will journey overseas this summer to participate in commemorative ceremonies taking place in France. The group will be in Europe from June 28 until July 7 - a trip Steven calls the Tour of Honour.
From the beginning, it was important to Steven that a youth contingent be included in the tour.
“We can’t just go over as the band, we’ve got to bring some young people from the CLB,” he says. “Because back in the day, the soldiers going over, losing their lives, were the age of these kids.”
Of the 500 CLB members who enlisted for service in the Great War, 135 never came home.
While overseas, the group will also be taking part in the Last Post Ceremony at the Menin Gate in Ypres, Belgium. Held to commemorate the sacrifice that came with the town’s liberation during WWI, it has happened every night since 1928 (except during German occupation during the Second World War). And since 2016 happens to be the 125th anniversary of the founding of the CLB, they will be visiting London on their way home for a joint concert. (The organization was founded in 1891 in London and a year later established its first overseas chapter, in Newfoundland.)

The CLB has been fundraising for the trip for three years. Along with hosting dinners and silent auctions, the CLB sold replica pewter hat badges representing the four local religious youth groups that were active in St. John’s during the Great War: the Catholic Cadet Corps, the Methodist Guards, the Newfoundland Highlanders and the CLB. (The CLB is the only group still active in the province today.)

“We feel we’re kind of carrying on the legacy of all those other people,” Steven says. “Because what makes those four groups important is that when the call came from England to put together a fighting force, the Regiment…was founded using young people from those four groups.”
Leading up to the centenary, Steven has had some individuals express to him their opinion that people should stop bringing up the tragedy of Beaumont-Hamel. But Steven and the members of the CLB can’t do that.
“Those people who didn’t come back home, the fact that they have been lying over there for 100 years makes no difference,” he says. “They deserve the respect of somebody going over and symbolically bringing them home. That’s what we said we’re doing. They can’t come to us, we’ll go to them.” - By Elizabeth Whitten