Coffee - that rich, dark brew that lures so many of us out of bed to take on the day. Those who can't imagine a world without coffee might be surprised to learn that the drink was almost banned from a large part of the civilized world on moral grounds.

Some researchers have dated coffee’s birth to c. AD 1000 in Ethiopia. As the Ottoman Empire grew in the 16th century, so did word of this delicious brew. But when coffee arrived in Europe, the very influential Pope Clement VIII’s (1536-1605) council regarded coffee as “the bitter invention of Satan” and wanted it banned. The Pope, as legend tells it, tried coffee for himself and declared, “This devil’s drink is delicious. We should cheat the devil by baptizing it.”
Fast-forward 400-plus years and coffee is one of the world’s most popular beverages, with more than 500 million cups of joe consumed each year. And while Newfoundlanders and Labradorians love our tea, coffee also has a place at our tables. In fact, appreciation for truly good coffee has spawned a micro-industry in the province. Recently, Downhome spoke with four local roasters on how they got started, what makes a good brew, and the importance of supporting neighbourhood brewers.

When Curtis Burns and his wife Kay started visiting Newfoundland from Alberta in the late ’90s, they say they couldn’t find a decent cup of coffee anywhere. “Coming out to Newfoundland at that time, there was no coffee to be had other than a jar of instant. So we hauled all of our coffee gear over from Calgary every summer,” Curtis remembers.

During their travels across the island, the couple would identify spots they thought would make a great café. What was just road trip dreaming became reality in 2011 - the year the couple opened a roastery on Fogo Island.

“And it’s completely consumed every possible minute of my life since,” Curtis laughs. Flat Earth Coffee has expanded over the years into a coffee shop and a canteen on the Fogo Island ferry. “So now I’ve basically got two coffee shops and a roastery on the go.” And there are ambitious plans for the fall, Curtis hints, but he isn’t ready to reveal them yet.

In a few short years, Flat Earth Coffee has developed an admirable reputation as a coffee roaster. “There is a strong local following and to the point where you hear the stories - and there’s more than a few of them - that they’ve given up on their instant coffee and they’ve given up on their Nabob and Nescafé, and some have even given up on Tim Hortons, because they’ve gotten hooked on fresh coffee,” says Curtis.
If you can’t make it to Fogo Island, you still might be able to taste the brew for yourself if you’re on the west or east coasts. Flat Earth Coffee can be bought at the Marble Inn Resort in Steady Brook and Crafted Treasures in downtown St. John’s. 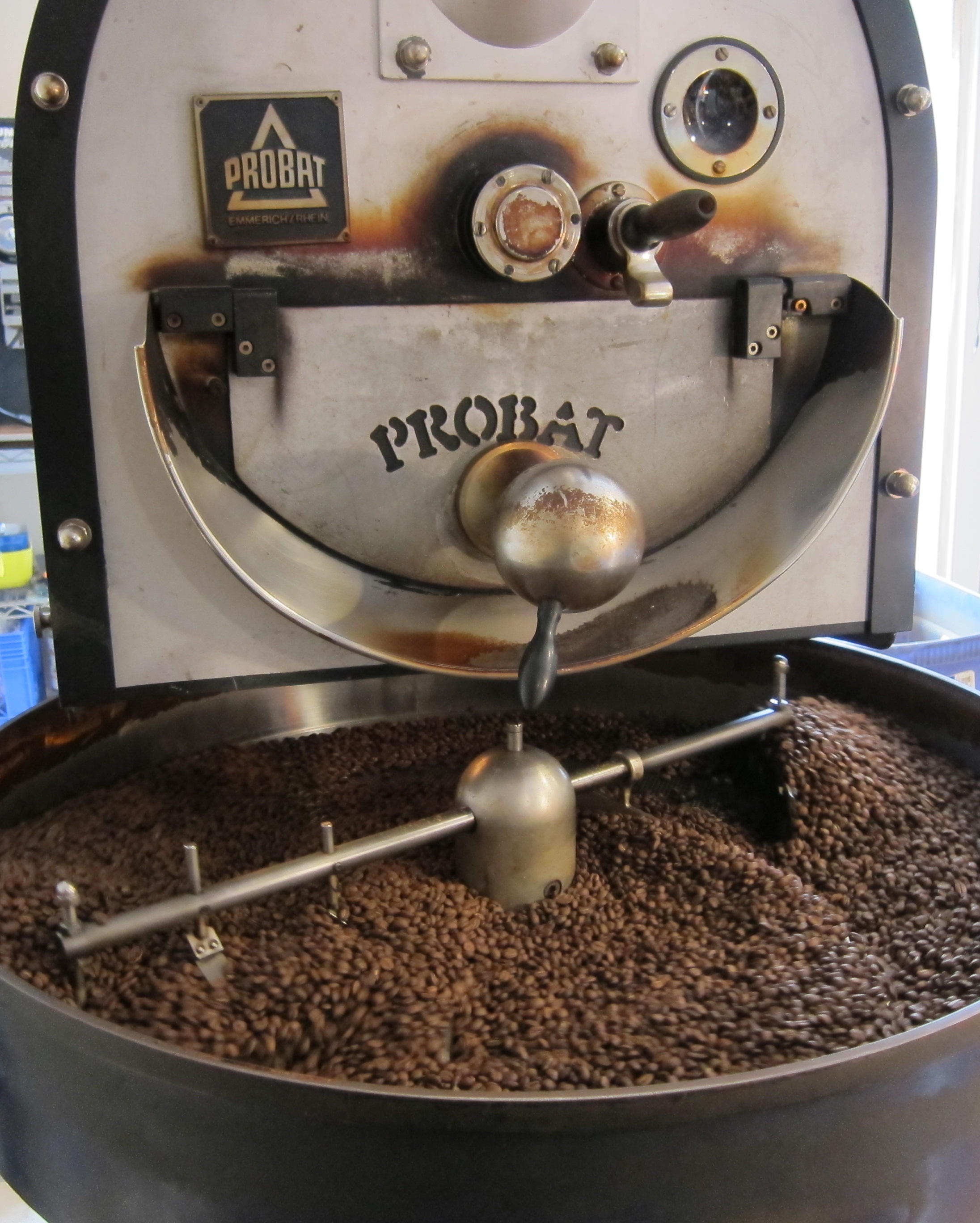 Ian White of Trinity Coffee Company always finds time to chat about his coffee, even while making deliveries around St. John’s. He’s usually in town once a week to drop off bags of the good stuff.
He got into the coffee business out of necessity, sort of. Ian used to order freshly roasted coffee for the Trinity Mercantile restaurant from Auntie Crae’s shop on Water Street. When Auntie Crae’s closed in 2010, “I kind of panicked. I didn’t know where I was going to get our coffee from for next year.” He ended up buying Auntie Crae’s coffee roaster and the owners gave Ian a lesson on how to use the machine. By August 2014, he was ready to launch Trinity Coffee Company.
“What I like about [coffee roasting] is it’s not a science, but it’s part-science, part-art, part-craft. And part-business,” Ian says, adding he wouldn’t sell you coffee he wouldn’t drink himself. “I taste each roast.”
Trinity Coffee can be bought in the town of Trinity at Trinity Mercantile when it’s open for the tourist season, and in St. John’s at the Rocket Bakery, Belbin’s Grocery, Tilt House Bakery, Mana Bakery, Living Rooms, Food for Thought and the St. John’s Farmers Market. People who live in St. John's and area can have it delivered right to their door. In addition, for coffee enthusiasts who want to try roasting their own, Trinity Coffee Company sells raw coffee beans.

Jumping Bean Coffee got its start back in 2005, when Jeff LeDrew made a batch of coffee to sell at a Rotary Club fundraiser. The success inspired him to start his company, which has grown into the province’s largest roaster, plus several coffee shops and an expanding franchise. Jeff, an engineer, even modified his roaster to make ECO2Roast, an environmentally friendly process that reduces 85 per cent of carbon emissions that comes from roasting coffee.
“The entire company was set up based on a certain set of ideals. One is the Rotary principle of ‘service before self,’” says George Murray, Jumping Bean’s marketing manager.
Jumping Bean Coffee can be bought at Costco and Loblaws locations across Canada, and customers will soon be able to buy their compost-friendly Keurig-compatible cups. “We always say, if you’ve got the value, the taste, the social and ecological responsibility… and it’s roasted right here, keeping jobs and money in Newfoundland, why wouldn’t you buy that instead of something else?” George says.
“I think people are increasingly aware of the value of local. Because the other thing, too is, you know when you get your coffee from Starbucks or from Tim Hortons, it’s being roasted somewhere else. It’s being packed up and shipped. It could be weeks and weeks before it reaches you,” George says. “We roast a batch out on St. Thomas Line and you could be picking it up in your Sobey’s 24 hours later… That’s the freshest coffee you’re going to get on the island.
“I often say if we can get a Tim Hortons customer, if we can get our coffee into their hands, we’ve got a convert. Because there’s no comparison. Once you’ve had our coffee, you’re not going back.”

Over on the other side of the island is Brewed Awakening, the only roaster on the west coast. In 2007, Peter Ollerhead opened his roastery and coffee shop in Corner Brook. The strong local following led to two more locations in the city; Brewed on Bernard and Brewed on Campus.

For the past two years Dawn Leja has been the manager for all three coffee shops. She explains all the coffee they brew is Fair Trade and organic. “We do really have a premium quality coffee and people appreciate that,” she says. They have their regular local customers, and then there are those who pop by during a visit to Corner Brook and are hooked. Those new devotees will then have it shipped to where they live. Dawn says they once sent a batch as far as British Columbia.

Because Brewed Awakening is a micro roaster, they make small batches. “Each individual roast is very individualized,” Dawn says. Each bag of coffee can be identified and traced to a specific roast batch.
“You’re getting a top quality coffee, for sure. And as fresh as possible.”

Another aspect of Brewed Awakening that savvy consumers appreciate is how the independent brewer supports other small businesses by using only organic, Free Trade coffee beans. Dawn says, “We definitely support the regions where we get our coffee from, and that’s very important to us.” - By Elizabeth Whitten