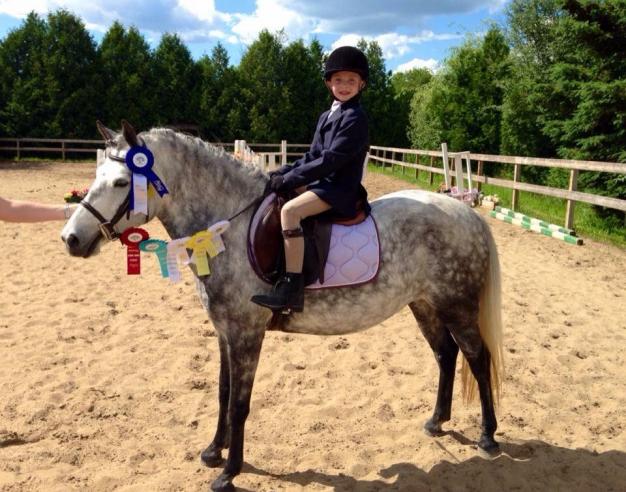 Sweetapple Pie and Captain Sweetapple share much more than a common sire. These dappled darlings have young riders who have overcome huge obstacles and suffered in ways no child ever should. The ponies have seen Bridget Zavitske of Kinburn, Ontario and Josie Affleck from Port Elmsley, Ontario through tough times - proof positive that Newfoundland ponies are the best medicine.

In June 2013, six-year-old Bridget was diagnosed with stage 4 Wilms’ cancer. Throughout her treatments she was tough, earning the nickname Supergirl. During Christmas 2013, Bridget won a contest at a local barn, Partridge Acres, to ride a pony for a year. That pony was Sweetapple Pie, belonging to Elisha Massong. Bridget quickly took to riding and wanted to learn as much as she could as fast as she could.
By March 2014, the cancer was back and a new six-centimetre tumour had grown around her urethra. The tumour was inoperable, as surgery would have caused severe damage. So Bridget underwent gruelling high-dose chemo, burning radiation, stem cell harvesting and more. It was hard on her, but she continued riding and showing Sweetapple Pie despite the pain. Bridget is once again cancer free and excelling in the show ring.
Sweetapple Pie will always be her first pony love, who helped her through her hardest days.

Gutsy Girl
On Thanksgiving weekend 2013, 12-year-old Josie was diagnosed with severe Crohn’s disease. She lost more than 25 pounds in one month, and at 5 feet 3 inches tall she weighed in at a scary 54 lbs. By the time she was admitted to hospital her body had become so malnourished that her organs were shutting down and her hair was falling out. Josie opted to use enteral feeding as her primary therapy on her journey to remission. This involved giving up eating for months while she received nourishment through a nasogastric tube inserted through her nose, down her throat and into her stomach. The treatment helped this gutsy girl gain weight and strength so that four days after her release from hospital she was back where she was happiest: in Captain Sweetapple’s saddle.

There is no cure for Crohn’s disease and Josie has since developed further complications including arthritis, sacroiliitis and the onset of osteoporosis. Despite constant pain, Josie rides her beloved pony at every opportunity. On days when the pain is too much for riding she takes comfort in grooming Captain and doing groundwork instead. Whatever the future holds, one thing’s for certain: Captain Sweetapple will be by her side.

Sweetapple Pie and Captain Sweetapple have helped Bridget and Josie in ways medication never could. Ponies change lives, giving our young people confidence and self-esteem, and providing peace and hope to troubled souls. We don’t meet ponies by accident; they cross our paths for a reason. Sweetapple Pie and Captain Sweetapple have brought their healing powers to Supergirl Bridget and Gutsy Girl Josie, who would likely agree that Newfoundland ponies are the “sweetest” medicine around. - By Korrine Affleck

I loved your story and your brave to share your story of hardships, how you managed and even get on now by using a love of horses to make you feel better. I have three horses and they brighten my day, glad to hear it is working to keep your spirits high. All the best Josie !