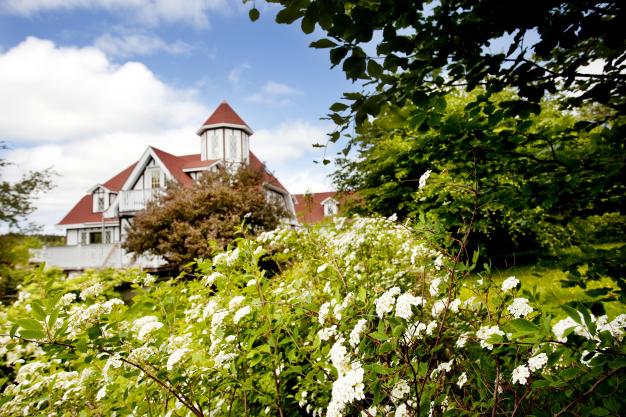 When booking spa services at The Doctor's House, guests should plan to arrive early - and stay late. There, R&R isn't just found in massages and mani-pedis, it's in every nook and cranny of the fairy-tale-like 100-acre property.
“As soon as you start the drive down the long, winding road full of trees…it almost relaxes you immediately,” says Laurelyn Berry, who owns the estate with her husband and business partner, Jerry Byrne.
Nestled in the countryside overlooking Trinity Bay about an hour’s drive from St. John’s, the Tudor-style mansion and its spectacular surroundings were one of the province’s best-kept secrets for half a century. After emigrating to the province from Ireland, the sprawling estate was dreamt up and gradually brought into being by a young doctor and his wife yearning for their own private sanctuary, a place to remind them of home. More than 50 years later, the couple has moved on, and now the appropriately named Doctor’s House Inn & Spa is a sanctuary open to the public.
“It’s quite stunning, and that’s an understatement,” says Jerry, who describes the property’s gardens as “Bowring Park on steroids.”
Flowers, shrubs and trees aren’t the only living occupants of the estate; it’s also a haven for a variety of animals. Four Newfoundland ponies, plus sheep, goats and a myriad of birds also make their homes here, adding to the naturally therapeutic experience.
“Not only is the nature around you making you feel very relaxed, but the animals also contribute to that,” says Laurelyn, a big believer in animal therapy.
Winding through the lush landscape are tree-lined walking trails leading to sweeping ocean views, the perfect place to enjoy a picnic before heading into the spa for additional pampering, suggests Jerry.
Five dedicated spa rooms accept clients who may choose from a wide variety of facial, body and nail treatments, as well as waxing and, most recently, hair styling and makeup.
“We’re very fortunate to have some really good spa talent, ladies who have been at it a while and who are very comfortable with the Aveda product line,” says Laurelyn.
The most popular spa services are couples massages, perhaps not surprising since the Doctor’s House has become a sought-after wedding and honeymoon destination. (The property witnessed its first wedding in July 2014 and by this fall, more than 70 couples will have said their I dos there.)
In addition to the spa, the business boasts a fine dining restaurant (featuring produce from an on-site greenhouse), and an event facility for weddings and corporate functions. Visitors who wish to spend the night may do so in one of the mansion’s 10 guest rooms, each with a balcony overlooking either the ocean or the lush gardens. A separate guesthouse is also available.
The Doctor’s House Inn & Spa reopens on April 24 (weekends only until June) and closes for the winter, although eventually Jerry and Laurelyn plan to make it a year-round retreat.
“Everybody who goes in there, it’s the same thing - it just captures the imagination,” says Jerry. “It’s like it’s magical.” 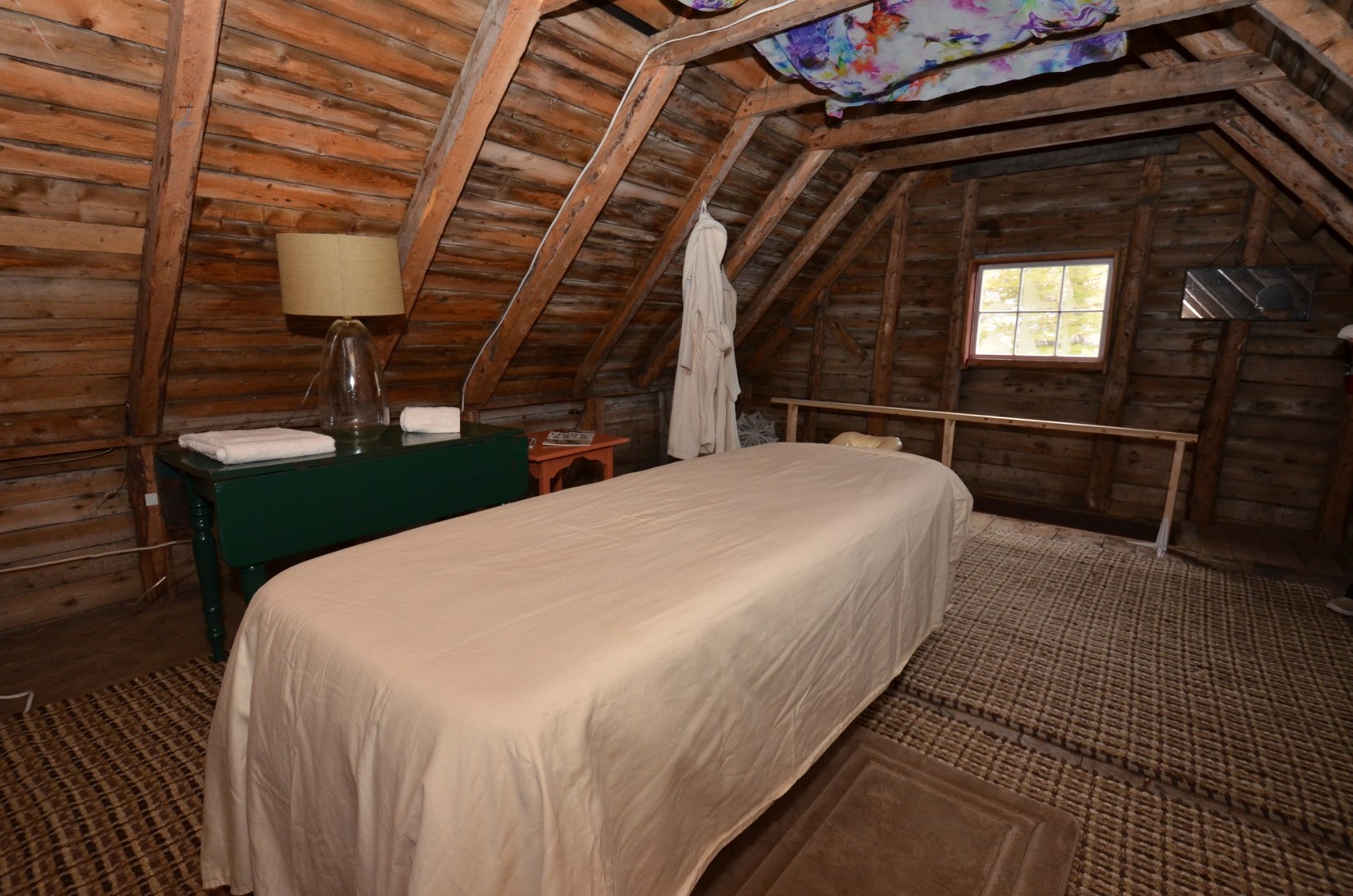 Guests who step inside the Wash House Spa for a little relaxation and rejuvenation need not worry about silencing their cell phones; they won’t ring there, anyway. Located on a small island an hour’s ferry ride from mainland Labrador, Battle Harbour is about as far away from hustle and bustle (and cell reception) as you can get.

Once the unofficial capital of Labrador and a hub of fishing activity starting in the 18th century, Battle Harbour is now void of permanent residents (the last livyers relocated in the 1960s and ’70s), but what was left behind has been carefully restored - including a rustic building at the end of a dock that now houses the Wash House Spa.
But is a spa really a good fit for a remote place like this? According to Lisa Walsh, a veteran of the aesthetics industry in the province, it is.
“Off-the-grid, indigenous experiences are becoming more popular,” says Lisa, who helped bring the spa to fruition almost two years ago. “People that travel there, they’re a different kind of person - they’re looking for an experience that’s different, that’s not something you can buy very many places in the world.”
And that’s precisely what clients of the Wash House Spa get. Just outside the spa building, staff collect saltwater and seaweed, which is used during treatments. Clients may choose from a wide variety of unique spa offerings, including partridgeberry pedicures, bakeapple body treatments, Labradorite stone massages and Labrador tea facials - all using products from Lisa’s all-natural, all home-grown skincare line, called Indigena.
“What I find is really important with Labrador tea is it has a narcotic-like effect when you drink it, so it relaxes people instantly; when we put it in product, that narcotic-like effect is pain relief,” says Lisa, who also heralds the bakeapple a “superberry” for its rich vitamin C content and skin-brightening results.
In its former life, the Wash House Spa building was, somewhat appropriately, the place where fishermen and sailors went to wash up after days spent at sea. And while the process of “washing up” there is vastly different today, Lisa says the building remains much as it was - nothing fancy.
“There’s two great big old red doors and it’s got the old-fashioned latch on it with the piece of rope,” says Lisa. “So the crowd from away haven’t got a clue what to do with that…so I have to show them how to open the door.”
Upstairs, the walls are bare, unpainted wood. And like many traditional structures in outport Newfoundland and Labrador, the whole thing is propped up on stilts; Lisa says even from inside you can hear the waves lapping underneath.
Of course, the spa is just one component of the Battle Harbour experience. Boat tours, bread-making lessons and hiking are all on the island’s itinerary. Historic structures have been carefully restored and available for guests who wish to stay on the island - the only National Historic District in the country where visitors can spend the night. 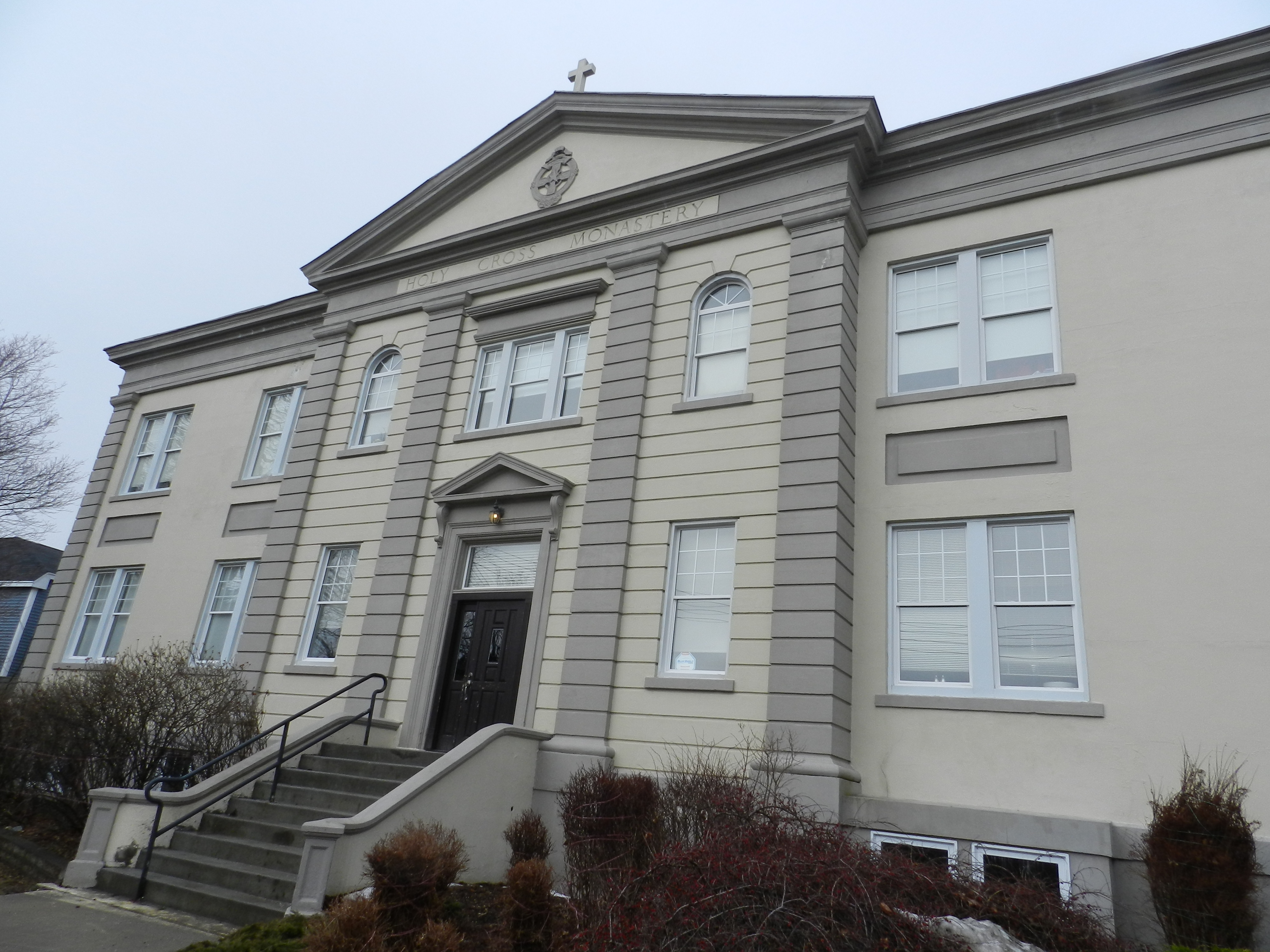 Save for the sign at the entrance to the parking lot, from the outside, the average passerby might not realize that the stately building on Patrick Street in downtown St. John’s is actually one of the city’s most popular spas. High above the front entrance, the words “Holy Cross Monastery” are still emblazoned in large lettering, a not-so-subtle hint of what this place once was.

Built to accommodate the Irish Christian Brothers who once delivered education to the city’s young boys, the cornerstone for the monastery was laid in 1931. Seventy years later, in 2001, the vacant building was snapped up and transformed into a spa.
Thanks to careful restoration by the original owner, the building’s interior isn’t short on historic charm, either. The original floors, mouldings and staircases give the place an old-world feel, while an original light fixture in the foyer, a restored pew and stained glass are quiet reminders of the building’s long history.
In 2014, new owners - The Leaside Group - acquired the spa and continue to respect the building’s past while ensuring a five-star experience for clients.
“Our focus is on hospitality and having standards above or on par with anybody else,” says Dion Finlay of The Leaside Group, which also operates accommodations businesses out of several other historic properties in the city, including Leaside Manor and Compton House.
Like the monastery building itself, the wide range of spa services offered within its walls is a mix of ancient and modern methods.
“We’ve tapped into some specialty treatments within the last year, like reiki and reflexology and chakra healing and the alternatives. I’m trying to refocus some of the energy towards healing,” says spa manager Mandie Stokes. “It’s not just about coming to get your nails done, it’s much more than that.”
For tourists, and for locals looking for a relaxing spa getaway, a tunnel connects the monastery to what was once a school, now 31 luxurious suites.
Just steps from shopping and dining on Water Street, the oldest street in North America, Monastery Spa & Suites is the perfect mix of urban living and old-world charm - and a true retreat for mind, body and spirit. - By Ashley Miller