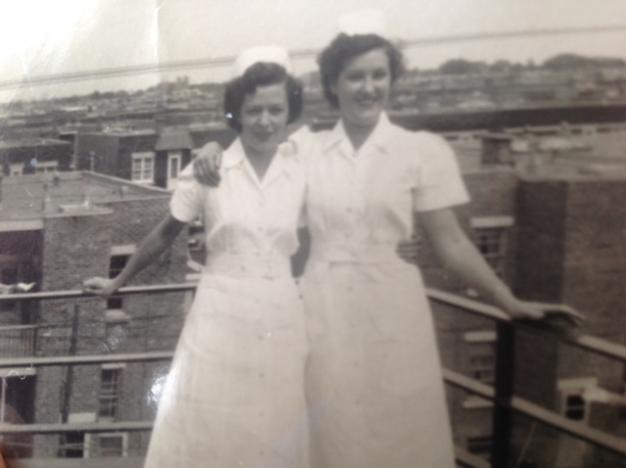 Edna (right) and fellow nurse, Beryl Butler, pose on a rooftop terrace in Montreal in the 1950s.

When a 17-year-old Edna Dunphy (St. Croix) left home in St. Mary’s Bay, Newfoundland in 1948 to look for a summer job in town, she had no idea it would be the beginning of a rewarding career in nursing.

Edna was hired as a nursing assistant at the St. John’s Sanatorium, where tuberculosis (TB) patients received treatment.
“The family wasn’t too happy about us working with tuberculosis,” remembers Edna, now 85 and living in Aurora, Ontario. She says her mother, especially, feared that she would catch the infectious disease, which, according to the Encyclopedia of Newfoundland and Labrador, was estimated to have been responsible for 20 per cent of deaths in the province in the early 20th century. Nevertheless, after passing a year-long course, Edna went to work nursing TB patients back to health.
“We had to be very careful,” says Edna. “Washing your hands and making sure you wear your mask…our supervisors were very strict, let me tell you.” She says staff had regular X-rays to make sure they hadn’t developed the disease, which spreads through the air.

The Nursing Life
Edna lived in a residence with other nurses, mostly young women, under the watchful eye of a strict Mother who did the housekeeping and made sure they met their 10 p.m. curfew.
“In the morning you went for breakfast, and then you went to roll call in this big room. And then we had to wash our hands and put on a gown and a mask,” she says. “We had to make our masks from wipes, tissue. There was a big ball of twine there, so you cut off so much twine and your tissue and you made your mask. And you wore that all day. Not the same one, you changed. But you had to wear a mask…it was scary.”
Nursing assistants then spent their shifts carrying out personal care for patients. And while work at the San kept Edna busy, it certainly didn’t make her rich.
“I think we only got $39 a month. And there was a variety store across the road, and it was run by a lady, a Mrs. Murphy. And we used to get all our snacks on charged accounts. So by the time you got your check, you owed Mrs. Murphy your check,” she chuckles. “We were young, didn’t know any better. Wouldn’t do it today!”

Treating Tuberculosis
When a patient was admitted to the San, they were immediately put on bed rest and given various medications, recalls Edna.
“When a patient went there first, they were strictly in bed. For so many months, they were in bed. And then every, I think it was six weeks, they had to get checked and then they were given privileges.” Privileges included things like walking to the bathroom instead of using a bedpan. One popular form of treating TB was fresh air.
“When you did your morning care, usually bed, bath, you had to open the windows then. Every window had to be opened because they believed in fresh air,” says Edna. “And then, if it was a sunny day, there were so many [patients] out on the veranda to get the sun.”
Edna says the most severe cases were sent to hospital for surgery to remove the infected lung; however, that was a last resort.
During her time at the San, Edna says she saw her share of tragedy.
“There was a lot of young people there, you know,” she says.
And despite the strict hand washing and mask wearing, Edna says some of the people she worked alongside came down with TB.
“But we were lucky, we escaped it,” she says. 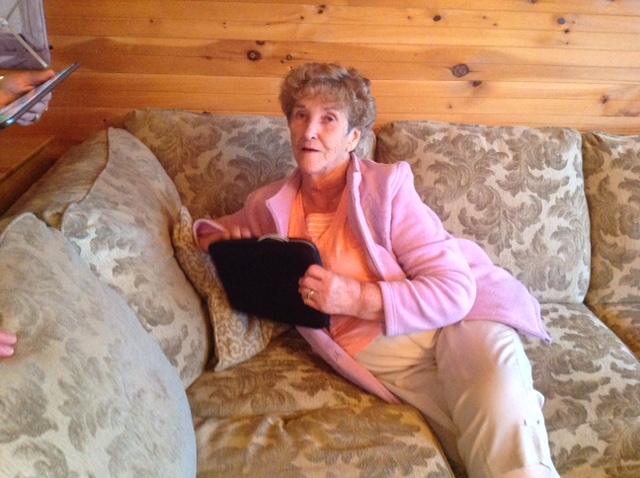 To the relief of her family, after two years at the San, Edna eventually transferred to the Hospital for Mental and Nervous Diseases (now known as the Waterford Hospital). Over the course of her career she worked in more than 18 hospitals, moving around eastern Canada and eventually working at Toronto’s Mount Sinai Hospital. She retired after 65 years of providing care. Looking back on her start at the San, Edna says it was a “heavy job,” but takes pride in the high level of care she feels the staff provided.

“The San was spotless, clean,” says Edna. “The patients were well looked after.” - By Elizabeth Whitten