The View From Here: Smith vs. Trump 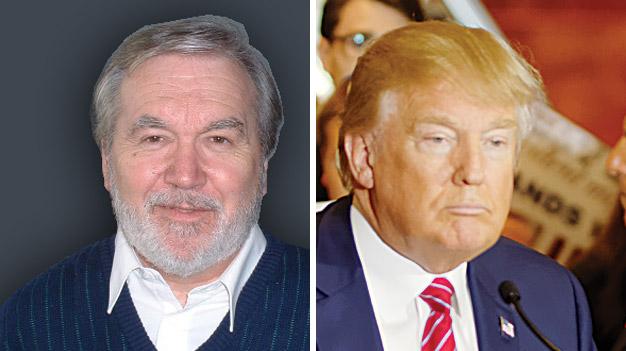 I've been getting letters lately asking my opinion.

All kinds of people want to know what I think. They are usually bright and creative individuals who want to weigh their own views against that of someone who thinks carefully about things. Then they come to me. They include Doctors of Nasal Passages and Doctors of Divinity. Men and women of ill repute. Politicians and pastors. Midwives. Others.

I have often thought I should hang out my shingle. You know, a sign over my door with large block letters: FREE ADVICE - NO CHARGE. I realized quickly that would be rather stupid since FREE ADVICE by definition means NO CHARGE. In the end I dispensed with the idea of a sign about offering advice. I remember how much I had given my children in their formative years and how much of perfectly good, common sense advice was left unused. My suspicion is that there was no way they could use the large amount of advice coming from both parents, so they simply listened to their mother’s contribution and ignored mine. (In retrospect, that seems to have been a wise decision.)

So I held on to my advice for some years, in hopes of one day giving it to some deserving person. I toyed with the idea of sharing some of it with my grandchildren, but as they grew older I realized they were doing quite well without it, so I threw it all away. Someday it may be discovered, like the Dead Sea scrolls hidden away in those caves in the Holy Land - only mine will be uncovered by archaeologists digging down through the old Springdale garbage dump. Not quite the Holy Land, but close enough.

But back to the present. The people wanting my view on things these days are mostly from the good old Yew-nited States. Whenever he was exasperated by some situation or other, my father was given to saying with great feeling, “Awful goin’ on in the States!” The situation in question might have nothing whatsoever to do with the aforementioned States, but this was his automatic and iconic response to whatever was happening.

I don’t know what his reaction might be today to the goings-on in those same United States, a la Donald Trump et al. I have a feeling his sermons might echo the words of good Pope Francis regarding Trump’s claim that he is a Christian.

My own reaction to that sorry sideshow, which pretends to be leading up to the election of the most powerful man on earth, is one of absolute disbelief. I’ve said it before so I might as well say it again. As a Canadian, I’ve been given the gift of free speech as well as Americans. And as a Canadian who, like all other Canadians, stands to be directly and extremely negatively affected by the possible results of that process, I have a right to air my feelings and risk the continued wrath of those people south of the border who obviously read my comments online.
And that’s where my disbelief lies. Not with “the Donald” himself. There are Trumps all over God’s farm preaching their own warped versions of democracy and Christianity, not to mention fairness and justice, with incredible arrogance and sexism and a total disregard for the rights of people who are not white Anglo-Saxon males. No doubt we have them in Canada, too, even in Newfoundland and Labrador and - God help us - on more than one municipal council. That’s not the point.
The point is that there are literally hundreds of thousands of Americans ready to walk the final mile for him. He has a fanatical following that will go with him to hell and back. Headlines in some papers recently suggested that Trump is unstoppable. That’s the scariest thing I’ve read since the headline in the Halifax Chronicle Herald in 1960 stated that Russia had exploded a 50-megaton bomb. I’m not sure which of these headlines had the potential to affect us more.

Because I have had a few words to say since this process started in the US, I’ve had a few emails agreeing wholeheartedly with me about Brother Trump - and more than my share of nasty letters from below the border. Some are simply calling me names while others are absolutely certain that Trump will definitely be the next president, “so you can go do you-know-what with yourself.” Apart from that suggestion being physically impossible, you have to admit that it’s uncalled for - even from a Republican.

Lately, however, people have been asking for my advice, which generally goes something like this: “For whom would you vote for president?” And “Who do you think would make the best president?” I have no choice but to respond to these pleas for help, although I know it will not bring me any more love from the lower 48.

There is no question in my mind about who would make the best president for the United States, but you can’t have him because he is already ours. Apart from that, Justin Trudeau was born in Canada and Mr. Trump says that bird won’t fly.
My next choice is likewise unavailable to you because Ron Young was born in Twillingate, which is very near Upalong, although they don’t like to admit it. Neither do we. Ron started this little magazine back in 1988, and showed great good judgment in asking me to write for it. There is your man, American cousins, but likewise he is ours!
I suppose I have to say it. As an honorary Democrat, my choice is fairly simple. I really like Bernie Sanders. He seems genuine and sincere, and certainly a great age at which to be president. But when push comes to shove, I have to get behind Hillary Clinton and push.

I would love to see her in that great leadership role. Perhaps it’s only when compared to the Republican bunch, but she looks really good.

So there you have it from a wannabe Democrat who loves you all with one notable exception.
And please keep him on your side of the border. - By Ed Smith

Author and humorist Ed Smith's column began appearing in the Downhomer in 1988. A retired educator, he has written many books, including five collections of his columns. He can be reached at edsmith@nf.sympatico.ca.