Bumps in the Road

Lee Drover (far right) poses with the ultralight adventurers - one of three "bumps in the road" he and the author encountered during their trip to Alaska.

When my wife passed away in December 2005 at 41 years old, I thought the world ended there and then. For a while, I isolated myself in my home, full of remorse, guilt and self-pity. Then I remembered something. Before my wife passed away, she and her parents had been talking about taking a trip to Alaska via a cruise from Vancouver in the summer of 2006. Despite my grief, I decided I was going to take this journey myself, with one important difference - I would be driving there.

In June 2006 I embarked on my road trip. En route I paid a visit to my good friend and native Newfoundlander, retired Colonel Lee Drover, in Sooke on Vancouver Island to see if he wanted to accompany me to Alaska. Lee was building a new house when I got there, so I spent a week helping him move in. Then we loaded the truck with a tent, axes, chainsaws, an old pump-up Coleman stove that took white gas, a gas lantern and lots of deer meat in the cooler, and off we went. We mainly stayed in our tent at campsites along the way, once in awhile getting a hotel for a good night’s sleep and a wash.

While driving in the mountains on gravel road in northern British Columbia, three birds hit the windshield of my truck within 30 minutes. Lee, a religious man with a strong belief in God, said it was an omen, and that something bad was going to happen. When I inquired further, he added that while hard times might not fall on us directly, we would be involved in some way. We drove on anyway.

Motorcycle Mishap
We drove for about an hour through hail and sleet, then very cold rain. As I took a right turn in the road along a glacial river, out of the corner of my eye I saw something on the riverbank. I stopped the truck and Lee and I went to check it out. There, struggling to climb up over the embankment, was a man with blood streaming down his face. In the distance, we could see a motorcycle out in the river.
Luckily, both Lee and I have advanced first aid training and so we were prepared to handle such an incident. We tended to the man’s wounds and gave him dry clothes. We also managed to pull his motorcycle out of the river, and got a fellow with a flatbed truck to not only take the bike, but also deliver the man to the hospital.
We stayed in Whitehorse that night and crossed the border into Alaska the next day.

Plane Panic
The following morning, after about 30 minutes of driving, we spotted two men at a rest stop with some kind of aircraft I’d only ever seen on TV. I have a private pilot’s licence, so I pulled over to take a look. They were ultralights, two seaters with a big prop at the rear and a parachute on the back. The backseats of both aircrafts were loaded down with gear.
We talked with the men about their aircraft and they told us they were going into the mountains for a week, hunting sheep. When one of the men announced he was taking off, I explained that I was a pilot and advised against it since the wind was blowing directly at the face of the mountain. He brushed it off, saying it wouldn’t pose a problem. Next thing, he started up the aircraft and took off. I grabbed my camera and started taking pictures.

Minutes later, I watched as the aircraft turned on its side and began falling into the side of the mountain. It landed in a bunch of trees about one third of the way up the mountain. Since Lee had a bad leg - and the other ultralight pilot was completely dumbfounded - I ran up the mountain myself to pull him out of the plane. He’d suffered some cuts and bruises but he was OK. His plane was another matter - how was he going to get it off the mountain and back to his home in Anchorage? 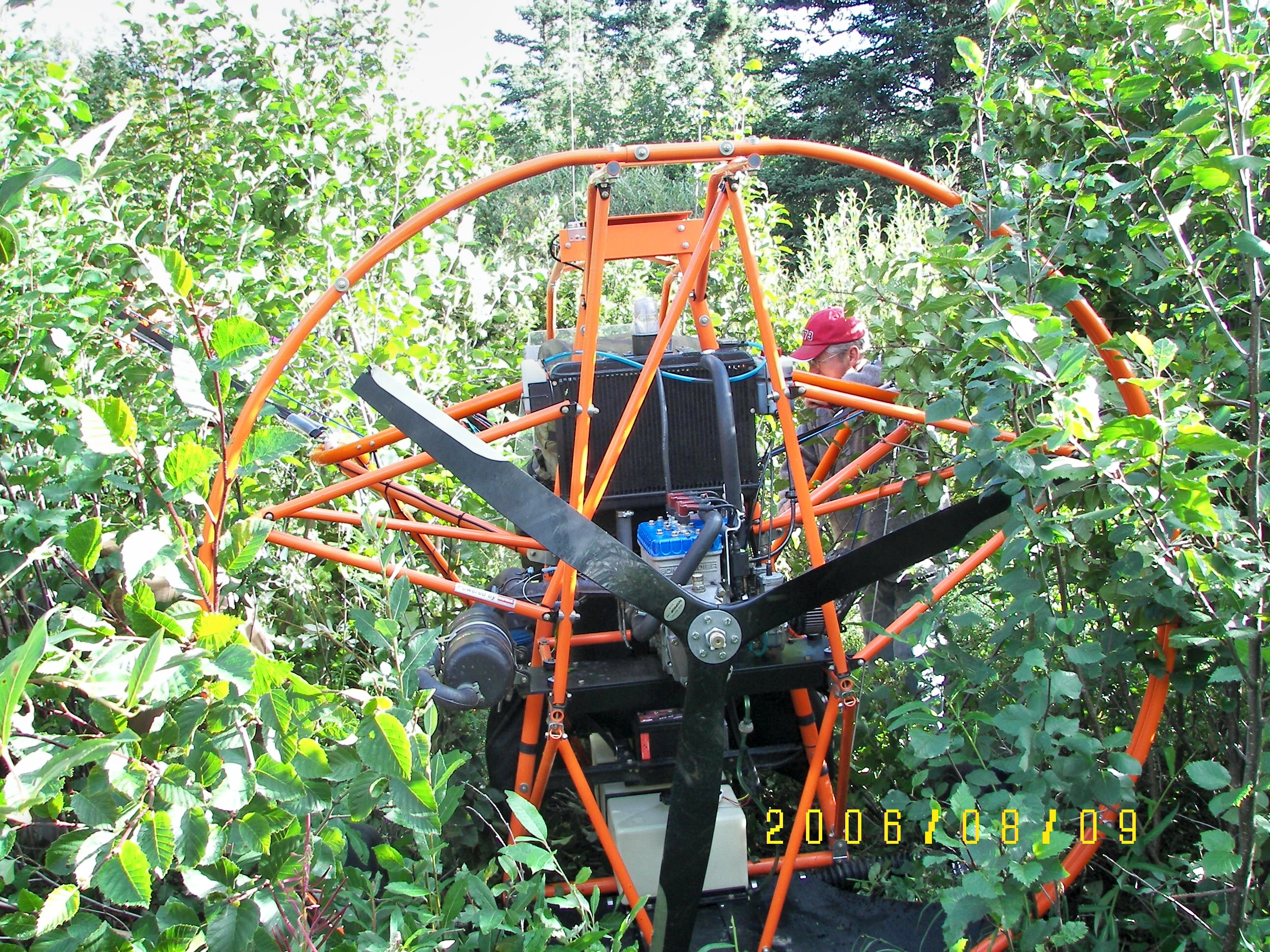 I drove my 4-wheel-drive truck up the side of the mountain until I reached the trees. Then Lee and I pulled out chainsaws and axes and cut a path to the aircraft. I hooked the ultralight to my Tacoma and pulled it out of the trees and down the mountain to their trailer. The two men couldn’t believe their eyes. They thanked us and were on their way home, with the worst injuries to their prides.

Lee drove after this and neither one of us made a sound for about half an hour, then Lee spoke up.
“That’s two birds down, the next one is going to involve water,” he prophesied.

Comes in Threes
We stayed at a campsite in Tok, Alaska that night, not talking much about our strange experiences. The next morning we left for Valdez to do some salmon fishing on Prince William Sound. We checked out the prices from local charter companies but the cost was too much for our budget. Luckily, two elderly fellows from Texas who had their own boat offered to take us out for $50 worth of fuel. We accepted, purchased our licences the next day and headed out with them.

We were allowed six salmon each, or 24 for the boat. We’d caught 18 fish when we heard a distress call on the radio. A boat had capsized near us, leaving three people in the water.

We rushed to the area and found one fellow floating face down in the water, so we grabbed him first. The others were treading water, and before long other boats arrived and took them aboard. Meanwhile, we performed CPR on the man we rescued. After throwing up a ton of water, he was OK. We took him ashore where the police and ambulance were waiting.

That night I couldn’t sleep, thinking about all that had happened in those few short days. I had a sign on the tailgate of my truck, given to me by my niece in Manitoba, which read, “Parking for Newfies only - all others will be towed.” That sign got a lot of attention from there on as word spread of our good deeds. Everywhere we went in Alaska people would say, “You’re the two Newfies who did those rescues!” We were heroes all through Alaska and were treated like royalty. The U.S military base at Fairbanks gave us a log cabin to stay in, with food and the works.

Shortly after the third rescue, Lee pronounced, “Everything will be OK now, no more trouble. That’s the three birds.” I dropped Lee off at his home in Sooke, BC - but my own journey was far from over. I drove down the western seaboard of the USA, then across to Arizona, on to Florida, back up the eastern seaboard and finally back home. I did all of that driving without a hitch, not even a flat tire.
My sister, Reverend Ellen Curtis, is an Anglican minster in New Brunswick and she had given me a cross so I would be safe on my trip. I still keep it in my truck and it goes where I go.
Despite the three bumps in the road, that trip was the best medicine I could have taken after the loss of my very lovely wife. - Submitted by Edward Curtis

Wonderful story Ed,Myself and Phil took the cruise to Alaska in 2014 and thoroughly enjoyed it

Quite the adventure, Ed. Thanks for sharing your story.

I have known Ed for many years and have shared a lot of great memories with him it doesn'the surprise me that he would endeavour such a great adventure. Ed would make a character that Discovery Channel could only dream about great story great person

Ed, I really loved reading your story. Things work in mysterious ways. The people you and Lee helped were so lucky that you guys were there. Thank you for sharing. Ella Spurrell

ED, I really enjoyed the story of your adventures in the Yukon, Alaska and norther British Columbia. It sure seems like both you and Lee had a wonderful trip and you must have been meant to be in those locations to help others. So proud of you both and Lee says he can't wait for the next trip especially when he has his new hip. We will call him the bionic man then, loved the story.