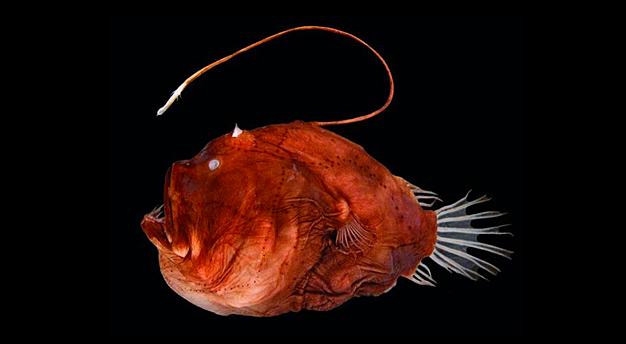 Just when you thought the glowing eyes of the chimaera (caught off the coast of Newfoundland recently) were the creepiest things you'd ever seen, along swims the deepsea anglerfish. Also known by its scientific name, Lophiiformes, this angry-looking fish is possibly the ugliest animal alive and lives in one of the most inhospitable environments: the lonely, lightless ocean floor. There are more than 200 species of anglerfish, with most being found in the murky depths of the Atlantic and Antarctic Oceans, often more than a kilometre below the surface. Anglers are dark grey, brown or black. Some species can be quite large, up to a metre long and weighing as much as 50 kg. However, most are significantly smaller, often only measuring 20 cm.

The most distinctive feature of the anglerfish belongs to the female: a dorsal spine that protrudes above the mouth like a fishing pole. It is tipped with a lure of luminous flesh that attracts prey close enough to be snatched up by the jaws, which are triggered by contact with the lure. The mouths on males and females, equipped with large translucent teeth, are so enormous they can swallow prey (mostly other fish and invertebrates) up to twice their own size.

What's even weirder? The significantly smaller males have evolved into a permanently parasitic mate. When a male encounters a female, he latches onto her with his very sharp teeth and will physically fuse with the female skin and bloodstream. He then loses his eyes and all internal organs except the testes. Sperm are released when her hormones indicate egg release. A female may carry six or more males. No other animal in nature exhibits this behaviour.

Read about more creeps of the deep in the March 2016 issue of Downhome. - By Todd Hollett, Wildlife Technician