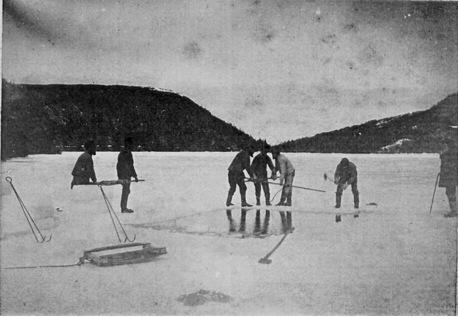 Beaver Pond is located in “the Arm” area of Harbour Breton, not too far from the shoreline. It’s fairly small and shallow, and produced thick ice. Cutting ice in Beaver Pond went on for many years, from the Newman & Co. time period to the mid-1900s.

Cutting ice was quite a business, with fishing schooners getting it to ice down their bait. With so many Nova Scotia and Newfoundland schooners coming to Harbour Breton back in those days, there was a great demand for ice. A number of locals, including the Pierces, Elliotts, Coadys and Mr. John Rose, all cut ice in Beaver Pond to sell to the banking schooners. Mr. George Chapman and his two sons, Tom and Bill, also “put up ice” for four or five years during the 1930s.
Ice was sawn out in square blocks, approximately 18 or 20 inches square, with a pit saw. The blocks were then put on a slide and hauled to the ice house near shore for storage. In order to keep the ice cold, it was covered with sawdust from Bay d’Espoir and the house was surrounded with boughs to shade it from the sun.

During the 1930s, it was common to cut at least 20 dory loads per ice house. This amount would be cut in about two weeks. It was not unheard of to get $5 for a dory load of ice. The demand for ice declined after the caplin run was over during the latter part of June.

Bill Arch Chapman tells a story about an incident in Beaver Pond as a result of cutting ice. “So many people cutting ice left a rather large area bare of ice, and one morning Patty Martin, on his way in the woods and not watching where he was going, found himself stepping off the ice and into the water. Fortunately for Patty, Hughie Bullen was coming behind him and pulled him to safety.” Crossing Beaver Pond in the wintertime to go in the woods was normally the route to use because good wood existed a little farther away, in the Bungay’s Pond and Bobby’s Droke (Moonlit Valley) areas.
Because of its close proximity to the community, Beaver Pond is still used today - not for ice cutting, but as a recreational area for ice skating and snowmobiling. Unsure of the origin of its name, one would assume that beavers used the pond at some point in time. - By Doug Wells