Another Perspective on the Kyle 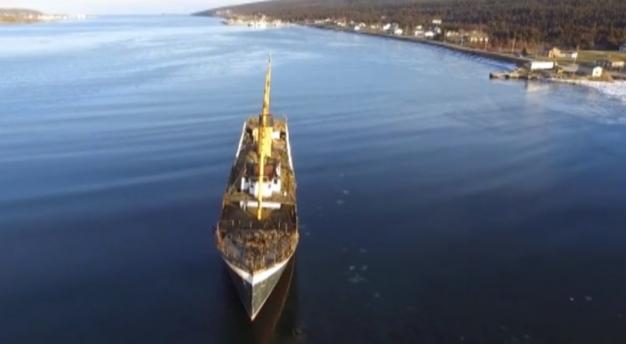 The SS Kyle, built in 1912, has become a fixture of Harbour Grace, Newfoundland since it grounded just off its shores during a storm in February 1967. A member of the province’s famed Alphabet Fleet, the ship once transported essential goods, mail and medical supplies - and everyone from sealers to soldiers - around the coast of Newfoundland and Labrador (and sometimes, beyond).

In the half-century since her grounding, the sight of the 220-foot sailing vessel sitting in the water has become a familiar one for locals and a draw for tourists. Thanks to College of the North Atlantic (CNA) journalism student Chris Lewis of Carbonear, Newfoundland, there’s now a whole new view of the ship to admire.

After taking a course on drones, Chris chose to test out his own drone by shooting footage from high above the iconic vessel.

“We figured it would be cool to fly around and see if we could see what no one else has seen - to get a bird’s-eye view. The footage turned out a lot better than we expected, so I put it all together into a little video,” Chris says. Since posting the video (including a reading of the poem The Smokeroom on the Kyle by the late Ted Russell) online, it's received thousands of views. With the SS Kyle in a bad state of disrepair, Chris’ video might have been shot just in time. After spending more than a century on the water, the future of the deteriorating ship is uncertain.