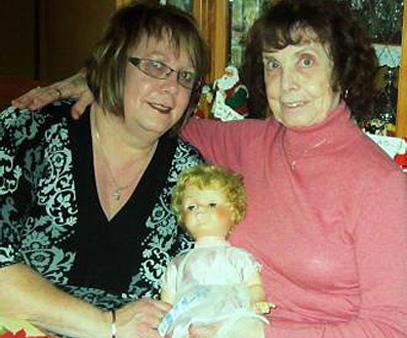 I am the youngest of eight children born to the late Alfred and Laura Pretty of Blaketown, Newfoundland. I was born in July 1961, when Mom was nearly 44 years of age. When I came along, my siblings ranged in age from 13 to 26. My eldest sibling, Irene, already had two children of her own and had moved to the United States with her husband.

Needless to say, I was a surprise, but I was also considered a miracle. In 1950, Mom developed tuberculosis and was hospitalized in the Sanatorium in St. John’s for two years, losing a lung and some of her ribs during treatment. Meantime, Dad had to raise the children on his own, with help from Nanny Mercer. Times were hard for my family, but Mom recovered and 11 years later I came along. I was loved and adored by my parents and my much older siblings. The new baby was almost like a toy to them, I guess.

My belief in Santa Claus was sealed during my fifth Christmas, in 1966. That year, a few days before Christmas, the Fast Order Catalogue arrived in the mail. In it I spied just what I wanted: a walking doll with a ribbon on the front of her dress, which spoke the words, “Hold my left hand and I will walk with you.” I immediately fell in love and yearned for the doll even more than the coaster (sleigh) I’d already asked for. So on Christmas Eve, I wrote a letter to Santa. I asked if he could bring me not just the coaster, but also the walking doll. I put the letter in the wood stove in the kitchen so the jolly old elf would receive it on his way down the chimney. That night, certain I’d been a good girl, I was so excited that I went to bed early saying, “Mommy, I can’t wait because Santa is going to bring me a walking doll.”

Years later, Mom admitted that those words made her sick since there was no way she could get the doll on such short notice. Back then people couldn’t just jump in a car or truck and head off to St. John’s at the drop of a hat. There was no Internet, no online shopping, no courier. We didn’t even have a telephone. Travelling on the Trinity South Bus for a couple of hours to shop on Water Street in St. John’s was a rare treat. Typically, you did your shopping from the Eaton’s or Simpson’s catalogue.

Completely helpless, Mom and Dad wondered how they were going to ease my disappointment on Christmas morning. While pondering this, a knock came on the porch door. Mom opened it to find Ms. Stella Osbourne (who has since passed away), the postmistress in Blaketown, with a package mailed from the United States. The parcel had arrived late to the post office, but Stella (who knew everyone in the community) realized that it was gifts from my older sister Irene and took it upon herself to deliver it to our house in time for Christmas.

So as I slept, Mom opened the box and found some dresses my sister had sent me, and a couple of other gifts. And incredibly, in the very bottom of the box there lay a doll - a walking doll with a ribbon on her dress that said, “Hold my left hand and I will walk with you.”

Mom and Dad were overjoyed, and since Irene had no inkling that I wanted the doll, Mom always said it was a Christmas miracle.

Mom laid the doll on my coaster and couldn’t wait for the next morning. I woke early, and I remember my excitement as I stepped from my parents’ room (because I slept with them) to find my walking doll and my coaster beneath the Christmas tree. I ran to the room and shouted, “Santa Claus brought me my doll! Oh how I love her!”

I played with the doll and, yes, if I held her left hand she would move her legs and walk along. I always loved that doll; even as I got older and out of doll playing, I hung her proudly on my bedroom wall. She was my reminder that yes, there is a Santa Claus.

When I got married in 1985 and moved into my new home, I brought my doll with me. My daughter also played with her and, eventually, the walking doll was gently placed in the top of the closet - but she was not put away and forgotten. I take the doll down from the closet often, reminiscing about that magical Christmas morning in 1966.

Fast forward several decades, to Christmas 2012, which holds more wonderful memories for me. At 77 years old, Irene flew home from the United States to surprise us for Christmas. It was my very first Christmas with my eldest sister. I wrapped my arms around her and cried, thinking about Mom and Dad, who have since passed away, and about the special doll she gave me so many years ago.

That year, along with my husband and two children, my three sisters and brother gathered at my house for Christmas dinner. (My other two brothers and another sister are deceased.)

While we ate and reminisced together, my walking doll sat in the glow of the Christmas tree. Forty-six years later, Irene said she could still remember purchasing the toy and feeling like I would really like it. I still do.