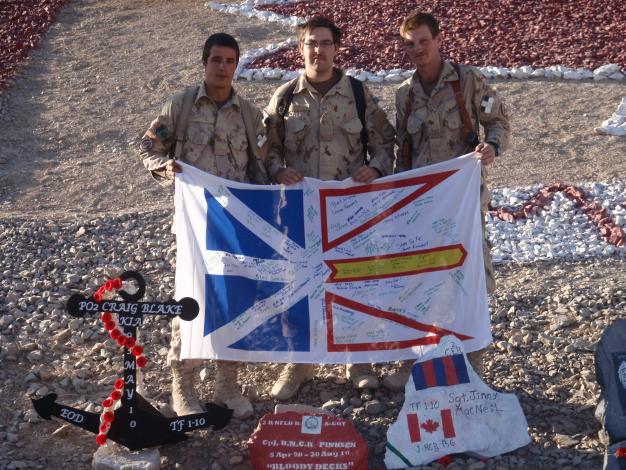 In 2010, six soldiers from the 2nd Battalion Royal Newfoundland Regiment were spending their summer in Kandahar province, Afghanistan. Thousands of miles from their homes and family, they conducted their jobs tirelessly with the soldiers of 2nd Royal Canadian Regiment. Cpl Brian Neil Calvin Ross Pinksen N39 850 372 was one of these soldiers. In a small village of Nakhonay, south of Kandahar city, Cpl. Pinsken was out with the rest of his section on a routine resupply run. This patrol would be his last.

Struck by an IED triggered by an insurgent who was no more than a child, Cpl Pinksen succumbed to his injuries on August 30, 2010, marking the first combat casualty of the Royal Newfoundland Regiment since the horrific battles of the First World War.

November 11 of that same year was somberly recognized as three soldiers from his home battalion stood around a homemade monument in Ma’sum ghar (forward operating base). The monument was constructed out of a flat rock taken from the mountainside and spray-painted red so that it stood out. White stenciled letters mark the fallen’s name with a hand-drawn Royal Newfoundland Regiment hat badge accenting the very top. This would stand as the only memento left behind of their beloved comrade and friend, and at the closing of the Afghanistan combat missions, it would be buried in the sands from which the rock came.

The date of August 30, 2010, not only marked the first death in the Regiment’s history in over 90 years, but also marked the date of the loss of my best friend. - Justin Eddison