Don Mills of St. John's, NL inherited his father's souvenir from the battlefield.

War is filthy business. Mud, tears, sweat and spilled blood are our most familiar images of combat, and they aren't pretty. But, it turns out, there was also a great deal of beauty that came out of those battlefields. While overseas during the world wars, many servicemen spent their downtime creating what is now known as trench art - artwork typically made using battlefield debris. They used things like bullets, shell casings or, in the case of one unique family heirloom, actual clay dug from the trenches.

Eighty-three-year-old Don Mills of St. John’s, Newfoundland says he can remember his father, Edgar Mills, showing him the tiny souvenir of WWI from the time he was a young boy growing up in Moreton’s Harbour, Newfoundland. About the size of a deck of cards, the square piece of hardened clay - dug from the trenches in Gallipoli, Turkey - features the emblem of the Newfoundland Regiment, the caribou, intricately etched on one side, and the abbreviation “NFLD” crudely outlined on the other. Don says it was one of his father’s prized possessions, a favourite conversation piece that Edgar (pictured below) pulled out whenever visitors dropped by. 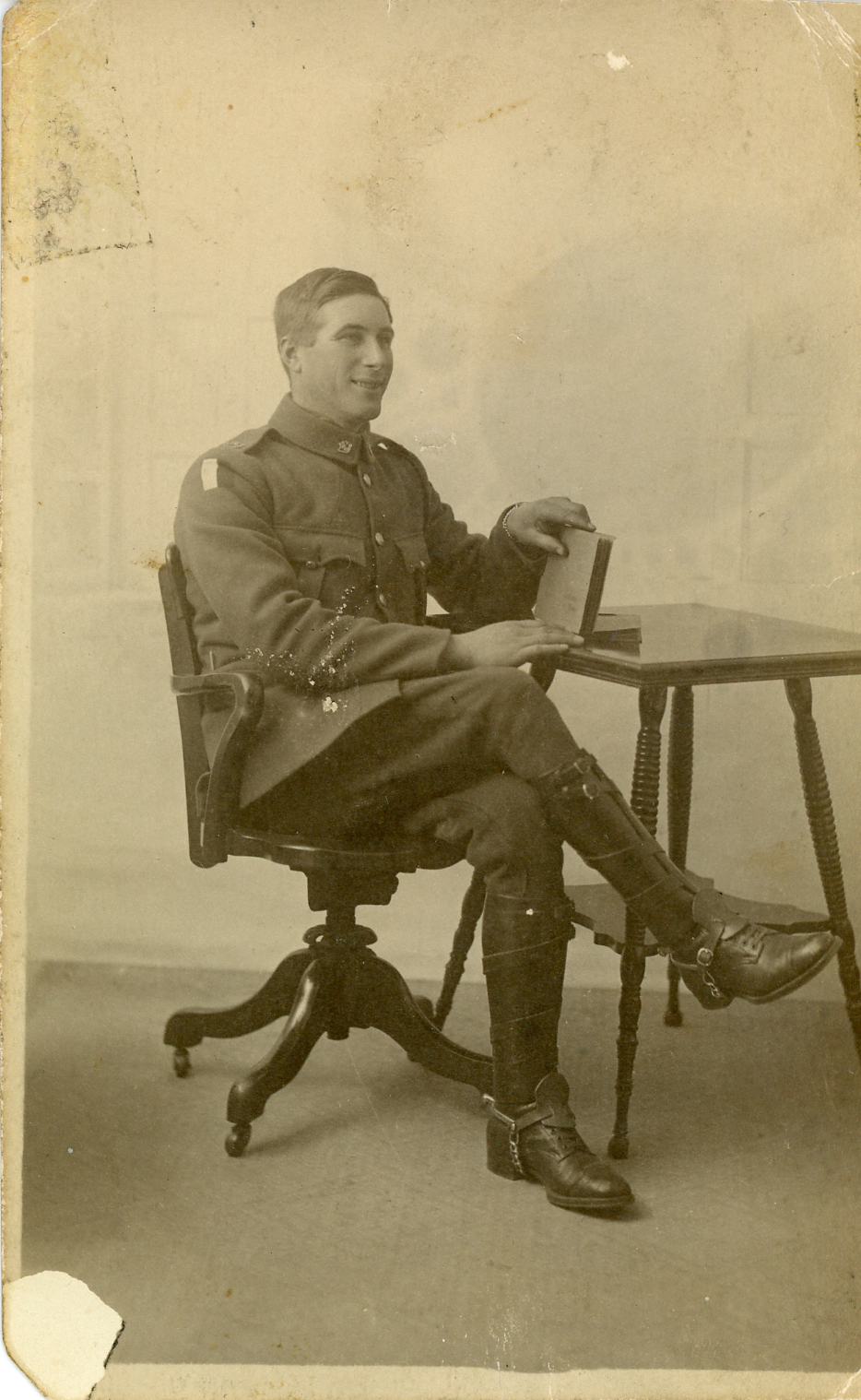 “He didn’t talk too much about the real bad things in the trenches or the war, you know. In fact, people used to try to coax him to get him to tell stuff, but he wasn’t always too free telling it,” says Don. “But he was always pleased with that, and his pictures.”

While in the trenches, another soldier hailing from Newfoundland carved the piece and gave it to Don’s father. (Unfortunately, Edgar passed away in the 1970s, and Don has long since forgotten the carver’s name.)

Don says his father and the men who served alongside him were tasked with delivering supplies to the front lines. Under the darkness of night, they made their deliveries on horseback, leading pack mules laden with provisions. Their days, meanwhile, were spent keeping out of the line of fire, down in the trenches.

“The rats and the mud and the dirt. I remember Father saying the rats would be down in the trenches with them, crawling up under his tunic to try to find a warm place,” says Don. “He had to put his hand up and catch the rats’ tails to pull them back down.”

It was perhaps amid this filth, awaiting their nightly duties, that the clay caribou - which Don inherited upon his father’s death - was carved.

While it may be inconceivable how such a dangerous, dirty setting could inspire any kind of creativity, Kerri Button, curator of history at The Rooms in St. John’s, says the practice of creating various types of art wasn’t unusual during the world wars.

“Judging from the amount of [trench art] that seems to be around, particularly in European museums, I would say it was fairly common,” says Kerri.

“A lot of trench art was made out of shell casings and bits and pieces of metal. You see things made out of bullets, just odds and ends of debris basically,” says Kerri, adding that it was an enjoyable pastime for many servicemen.

“They were bored because they only spent about 15 per cent of their time in a front line trench,” says Kerri. “They were kept busy with regular army routine: drills, parades maintenance of equipment, training, all that sort of thing - but there was downtime and they’d look for something to keep them busy, and they would make trench art. That would be one of the things they could do, that was one of the coping mechanisms that they would use.”

Kerri says some servicemen became so adept at creating such souvenirs of war that they would sell their work to other soldiers.

“There was a trade, there was a market for this,” says Kerri. “If they weren’t making it they could buy it, and then they could send it home to family and say, ‘Look, this is made out of a bullet, here you go.’”

Injured soldiers, too, often created art; handiwork such as embroidery and woodworking projects were typical hobbies of servicemen throughout long periods of convalescence, says Kerri. “Getting them to use their hands, it was almost like physiotherapy in a way,” she says.

While the clay caribou carving is indeed remarkable, Don says it is incomplete. The artist only crudely outlined the letters “NFLD” on the reverse side, leaving the remaining detail work to Edgar.

“Father never got a chance to finish it before it hardened up, I guess,” says Don, adding it’s possible the men were given orders to move out shortly after his father received the gift.

Some time later, Edgar was injured when a box of ammunition fell on him - landing him in Wandsworth Hospital in London.

“Other than that I guess he would have been at Beaumont-Hamel, so that was a good thing [that] happened to him,” says Don.

Edgar kept his little carving with him throughout his lengthy stay in hospital. During his recovery, one of the nurses gave him a small brass box in which to store his precious keepsake, and that’s where it resides to this day.

Nowadays Don keeps up his late father’s tradition of showing off the little caribou carving, recently offering it (as a temporary loan) to The Rooms for its exhibition marking the 100th anniversary of the First World War, opening July 1, 2016.

“Everybody just wants to hold onto it and look at it,” says Don. “It’s a one of a kind.”

Yes, beautiful things did come from the war. Not the least of which was freedom. - By Ashley Miller