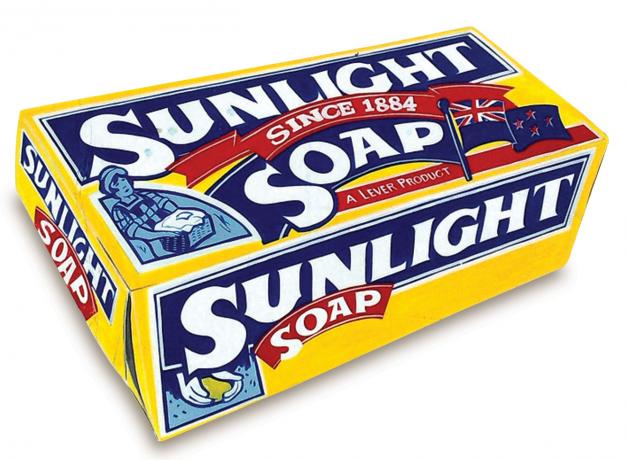 A walk through the cleaning aisle of your favourite supermarket will quickly reveal that today's shelves are chock-full of cleansers, disinfectants and fresheners. When I was a child in Branch, Newfoundland in the 1950s, my family had a one-size-fits-all product: Sunlight Soap. My mother used her “cake” of Sunlight Soap for every cleaning chore.

The tender bottoms of every child in my family were washed with Sunlight Soap. I can remember quite clearly the infant days of my younger siblings, who were born right in our family home on the hill. When the little ones were merely hours old, the midwife cleaned them gently with a soft piece of flannelette and a cake of Sunlight Soap floating in a pan of warm water. I can still smell the pleasant combination of Sunlight and Johnson’s baby powder from the first time I was allowed to hold a newborn baby in my arms.

Today we cannot wash our hair without brand name shampoos, conditioners, rinses and other expensive treatments. But Sunlight Soap did it all when I was a child. Mommy would rub that cake of soap over our heads. I always dreaded times when she was using a new cake because the edges would be somewhat rough on my scalp. From head to foot, backs, bottoms, bellies and all got scrubbed with that familiar yellow cleaning agent. In Mass, on Sunday mornings, the clean scent of Sunlight permeated the church.

My mother used Sunlight for much more than personal hygiene. When the big aluminum pan was filled to wash the dishes, the yellow cake of soap would be dropped into the hot water. It wasn’t easy getting the grease off dinner boilers and ridding the big iron frying pan of scruncheon fat, but Sunlight Soap managed to do it all.

Without the convenience of electricity and before the advent of gasoline washers, every stitch of clothing was hand-washed in a tub on a scrubbing board. And what was used to get out the dirt? Sunlight Soap, of course. When the soap was fairly new, running it over the board was not too strenuous. But boy, when the cake was dwindling, it must have been hard on the knuckles! The endurance of both the soap and the housewife was put to a rigid test when laundering the unmentionables.

Before Christmas, good old Sunlight Soap probably got its heaviest workout. Walls and ceilings had to be made spotless, not to mention the daily floor cleaning. Curtains were pulled off windows and immersed in tubs of hot suds. The Sunlight company probably loved the Yuletide season best of all.

From serving as a mould for a key impression to softening the heel part of uncomfortable new shoes, you could depend on that little cake of Sunlight. And if the squeamish will excuse me, a sliver of soap, pared to the correct shape and size, was sometimes utilized in emergency situations as a local enema. That’s right, when doctors and hospitals were just not available, it was Mr. Sunlight Soap to the rescue. Thank God, we can still purchase Sunlight Soap. It’s a handy commodity to have around. - Submitted by Marina Power-Gambin, Placentia, N.L.