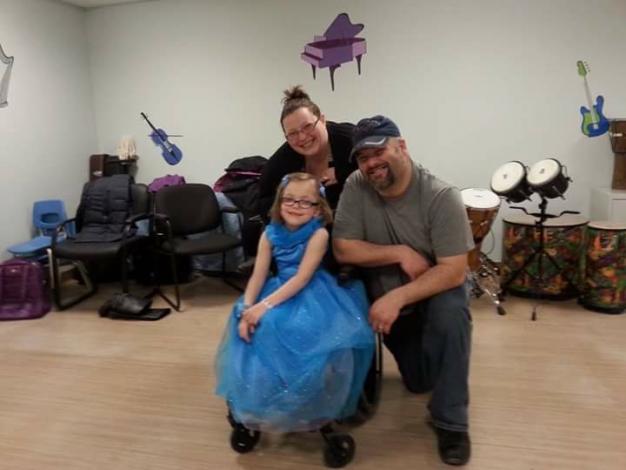 Claire McDonald and her parents

Claire McDonald is a special little girl who needs a lot of special attention. But at least once every year, Claire and her parents put all their efforts into directing their attention elsewhere and encouraging a worthy cause - one that means the world to them.

In 2010, Jeanine and Barry McDonald welcomed their first child into the world. At 13 months old, Claire was diagnosed with cerebral palsy and epilepsy. Since then she’s also been diagnosed with autism.

Claire’s condition means a lot of early mornings and several trips to the Janeway children’s hospital each week for appointments. Parenting in general is sometimes stressful, but raising a child with several disabilities creates a new level of challenges for families. The McDonalds found support in Easter Seals Newfoundland and Labrador, a local branch of an international charity group that aims to help children with disabilities.

“It was probably the only place that we ever felt we connected to. Having a child with a disability, it’s hard,” Jeanine says. “We’re a young couple and she is our first child. It was a pretty hard situation to kind of understand. And when we had found Easter Seals, we found other families, other people. It became our normal.”

The McDonalds were keen to find a way to return the support. Jeanine says the non-profit Easter Seals is always looking for ways to raise more funds, so “we wanted to give back something to help.” Jeanine’s mother suggested a craft fair, with the proceeds going to Easter Seals. (It’s expanded this year to include the Sunshine Foundation and the Church of the Good Samaritan as beneficiaries.)

“It was so good the first year [2012], and it was so prosperous and everyone enjoyed it so much, we felt it was something we needed to do,” Jeanine says. She estimates that last year more than 2,000 people attended, and in three years they’ve raised about $10,000. “That’s pretty great for a little craft fair.”

Jeanine says the fair is the result of a year’s worth of work. The McDonalds handle everything from booking the space at Easter Seals to renting the tables and arranging the entertainment. The fair has pretty much everything under one roof. About 50 vendors gather at Easter Seals to sell goods such as knitwear, sealskin, sweets, jams, breads and even homemade dog food. “There’s nothing we don’t cover,” Jeanine promises. There’s live music and, for Claire and all the other kids who drop in, there’s a wheelchair-accessible photo booth, face painting and balloon twisting.

Through creating Claire’s Craft Fair, Jeanine and her family have found themselves in a growing community of supporters. “When Claire went in for surgery back in May, I had probably close to 100-200 emails from people. From people I didn’t know, who knew Claire was going in for surgery, who took part in my event or were customers, asking how she went or giving their ‘hope she feels better’ and ‘good luck,’” Jeanine says.

“You can ask the people who take part in it, they’ll tell you: it’s more than a craft fair. It’s a different feeling, it’s a different atmosphere,” she says. “It’s like a big, huge family and that’s kind of what it ended up being. It’s like a big family event. It’s kind of nice, and that’s why we continue to do it. It ended up being more than a place you go.”

This year Claire’s Craft Fair will be held on October 17 and 18 at Easter Seals on Mount Scio Road in St. John’s. - By Elizabeth Whitten

To learn more about what Easter Seals has meant to the McDonalds, read Claire’s Journey on the Easter Seals website: http://www.eastersealsnl.ca/files/story-claire.pdf