"DH1934." This obscure message, carved into a rocky surface on Newfoundland's Great Northern Peninsula some 81 years ago, may be taken as firm evidence that although communications technology has changed over the generations, humankind's inclination to communicate has not. Posted using a rudimentary hammer and chisel in Whites Arm by then 17-year-old Donald Harvey, it was certainly as permanent a posting as any tweet, text message or other Internet-based communication (once on the “net,” always on the “net”; once on the rock, always on the rock). But like any text or tweet that’s more than a few seconds old, could “DH1934” be easily retrieved? Finding it would start with Staragan, a 30-foot sloop-rigged sailboat. The odds of success, I figured, were not great.

In August 2009, I’d docked Staragan in St. Anthony for several days on the way back from Labrador to drop off departing crewmember Dwight Howse and await the arrival of Greg Harvey, who would be accompanying me for my return voyage to Holyrood. Both Dwight and Greg are knowledgeable and experienced sailing vessel mariners. Having either of them aboard Staragan makes life for me far more enjoyable - I can eat at mealtime, sleep at bedtime and doze at naptime. With Greg’s arrival I was ready to continue the relaxed voyage that I had experienced with Dwight, with no worries about Staragan being under competent command while I ate, slept and napped. But Greg had something else in mind.

“We’ll be passing by Whites Arm on the first leg of the trip,” he said. “It’s called Great Islets Harbour on the chart.”

“Yes,” I said, sneaking a peek at the charts and pretending to know as much as he - but I could tell he had done his homework. He continued, “Father (as he calls his dad) was there in the 1930s working in his uncle’s fishing operation.”

“Oh that’s interesting,” I said. “Let’s go close ashore along the way and have a look around. We should be across Hare Bay sometime after lunch and we’ll probably get to see the old fishing premises where he worked.”

I sensed there more was in the offing.

“Father carved his initials into a rock near the dock,” he finally announced.

Greg knew he had pushed one of my hot buttons: an obsession with finding information - of any importance, stored in any place, be it the Internet, a library or even a rock near a dock.

“Well,” I replied, “it’s not just a voyage now, it’s a quest.” But then I thought, how hard would this quest be? Would the dock, by now surely in ruins, easily mark the rock’s general area?

Staragan departed St. Anthony the next morning under drizzly, overcast, relatively windless conditions. It was one of those days when there’s lots of fog hanging on the hilltops, while still allowing good visibility along the water’s surface. As we headed southward across Hare Bay, Fischot (pronounced “fish-caught”) Islands passed to the west and the headlands of the Grey Islands remained visible in the southeast.

As we rounded the southernmost Fischot Island and proceeded into Great Islets Harbour the fog retreated and glorious afternoon sunshine saw Staragan anchored in the harbour’s picturesque Admiralty Cove just west of Chaberet Island. There was no evidence of human habitation, no sign of fishing premises and certainly (despairingly) no dock ruins. Nature had completely reclaimed the Whites Arm fishing operation. Finding Donald Harvey’s message now appeared to be as difficult as any research task I had ever attempted. Our stunned silence was soon broken by questions about how much food we had, how long it might last, and whether trout could be caught in the brooks that we could see flowing into the cove as we anticipated a long and painstaking search ahead. 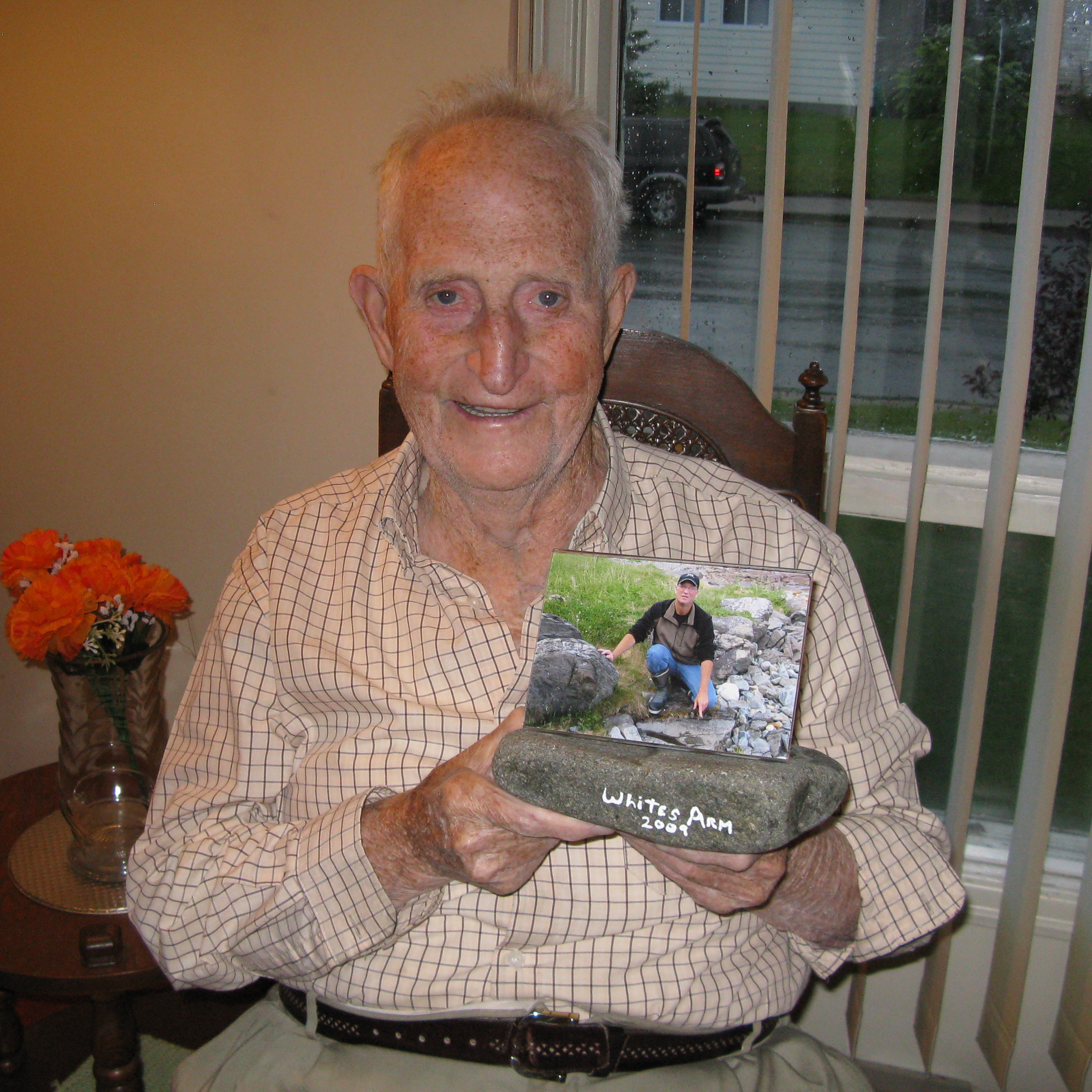 We deployed the dinghy and rowed to a spot that seemed to match the description of the dock area that Greg had heard from his father. Greg went southward and I northward. Within an hour, Greg called out with news of a successful find. He could clearly discern “DH1934” carved in a stone surface a short distance from shore. Our quest proved short-lived, our food supplies were once again adequate, and the trout in the brook were safe.

As Staragan departed Great Islets Harbour the next morning I wondered if Donald Harvey would be as pleased as we were about finding his long ago message. I was also a little self-congratulatory that Staragan had proved to be a fast and effective search engine.

(At left is Greg Harvey's photo of his dad Donald holding a photo of Greg taken that day at Great Islets Harbour. He looks pleased.) 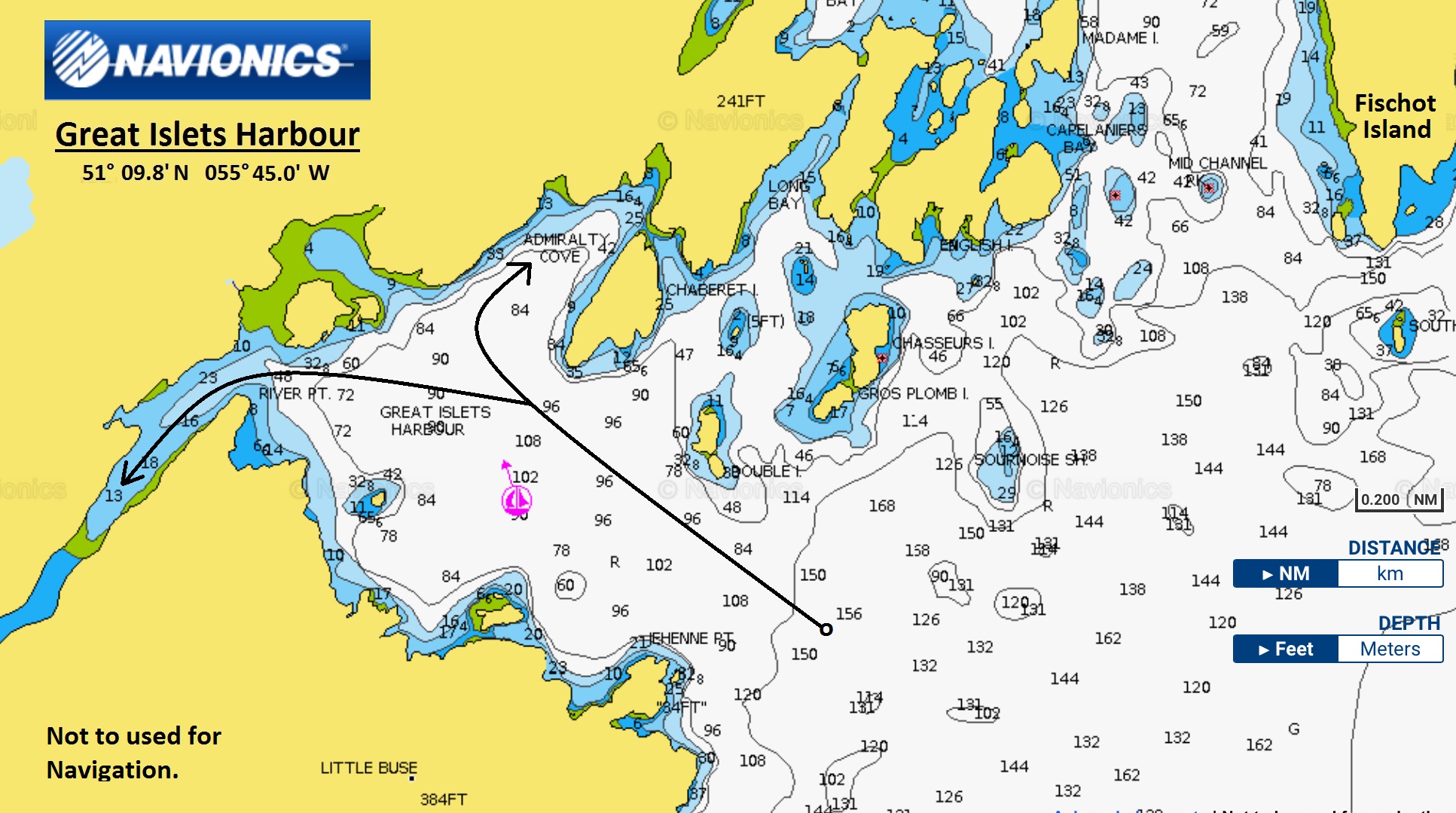 Harbour Entry: Great Islets Harbour may be entered south of Double Island and north of Jehenne Point in a straightforward manner.

Docking/Anchoring: No public wharves are available in the harbour and no private wharves nor moorings were observed. We anchored in Admiralty Cove to the west of Chaberet Island while we conducted our onshore search. Although the anchor rode wrapped around a rock, Staragan remained securely moored during our visit. We relocated to an area west of River Point and anchored for the night in the river estuary that opens into the harbour.