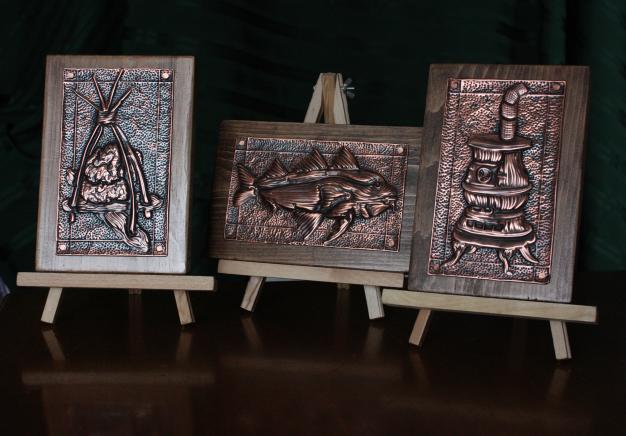 For John Andrews of St. John's, Newfoundland, the daily grind is a thing of the past. After pursuing his passion for artistry - including everything from printmaking to copper designing - as a hobby for years, in 2013 he finally took a leap of faith and quit his day job to pursue his creativity full time.

“I wasn’t as happy professionally as I was in previous years, and I knew that this was making me happy, so I decided to make the move,” says John, who previously worked in newspaper layout. It’s a decision he’s never regretted.

John’s artistic interests and talents are extremely varied. He dabbles in photography, is an excellent painter and is also the clever, creative mind behind the cartoons that appear in the Northeast Avalon Times newspaper.

“I kind of feel like I may have spread myself a bit thin at this point, but I’m still enjoying it all, and I don’t really want to give any of it up,” he says.

John insists he doesn’t have a preferred medium; instead, he says his interests in various types of art ebb and flow from year to year. At the moment, he’s especially focused on copper work.

His interest in this relatively uncommon art form began a few years ago, when his wife gave him a copper art kit as a gift. He says he took to it immediately, and he’s been honing his skills ever since.

Even the most intricate of John’s copper pieces starts out life as a simple, hand-drawn sketch. John then photographs and digitizes that sketch to create an original template, which he uses to outline his design on a sheet of copper foil (stiffer than aluminium foil, but still malleable). He etches his design onto the foil’s reverse side, working on a soft surface so the copper can be pressed outwards, creating a beautifully textured surface. Throughout the process, John is constantly flipping the piece from front to back, back to front - etching on one side, refining on the other - until the design is just right.

The next step is part artistry, part chemistry. John submerges the embossed foil into liver of sulphur, a chemical that reacts with copper - turning the whole thing black. Finally, some buffing with fine steel wool persuades some of the copper to shine through again, creating an attractive contrast.

While his design inspirations come from anywhere and everywhere, much of John’s artwork - whether on copper or canvas - echoes the heritage and culture of Newfoundland and Labrador. Among his designs, you’ll find codfish, squid, trout and a pot-bellied stove - inspired by fond memories of his grandmother’s old stove.

A juried member of the Craft Council of Newfoundland and Labrador, John’s work is available at Devon House and several other retail locations in downtown St. John’s. And John can be found standing proudly behind his wares at markets and craft fairs around the Avalon Peninsula; he’s a regular at the St. John’s Farmers Market and at Some Good Market. “The markets have been a real help to me in getting my work out,” says John. “I really appreciate being involved in that world.”

And John has learned something that’s surprised him through getting out there and meeting with customers directly. While he says few people may be producing copper art professionally here, a surprising number of Newfoundlanders and Labradorians seem to know a thing or two about it.

“What I’ve learned since I’ve started going to the markets is that [copper art] was actually a popular craft years ago and taught in schools locally,” says John. “In fact, at almost every market, someone will tell me that ‘I used to learn how to do this in school.’”

While many are familiar with his craft, however, few have mastered it as John has. After all, mastery takes time, which he’s made; talent, which he possesses; and passion - which he’s got in spades. - By Ashley Colombe

Keep up with John’s works of art by following his blog at doodlepalooza.blogspot.ca.