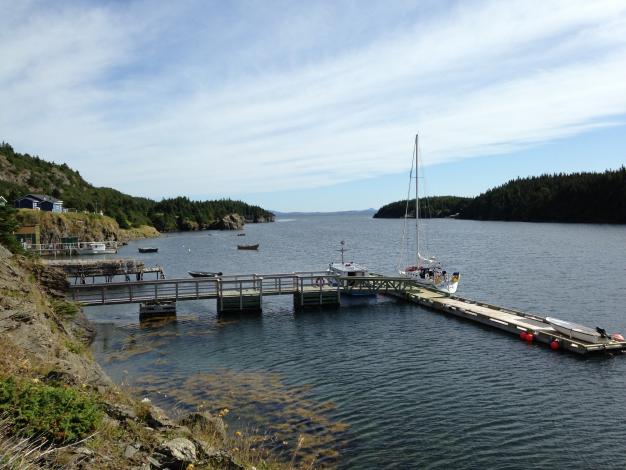 The dock in Bar Haven

“Staragan, this is Placentia Traffic, please go ahead, sir.”

“Good afternoon, Placentia Traffic. Staragan is departing Arnold’s Cove bound for Bar Haven. The boat is a white, 30-foot sailing vessel with one person on board. ETA Bar Haven is 1830. Any advice you may wish to provide would be greatly appreciated.”

“Staragan, this is Placentia Traffic. There are no reports of vessel movements in the area.  You are cleared for departure. Please report your Bar Haven arrival. Have a pleasant trip.”

And so a much-anticipated visit to Bar Haven finally began, and with it the possibility of shortening my bucket list. The community had loomed large throughout my early years:  my parents often talked of Bar Haven; as a young teacher in outport Newfoundland, I had students from Bar Haven; my family’s neighbours were a resettled Bar Haven family.  Bar Haven had been firmly stitched into my life, but here I was entering my seventh decade and I had never set foot there. It was about time.

The winds that day were light northerlies, which in much of Newfoundland would put an unpleasant chill on a late summer day. Not so in Placentia Bay, where a north wind flattens out stomach-churning seas from the southwest and clears away the bay’s notoriously dense fog. For a sailing vessel on a westward passage to Bar Haven, a north wind is “abaft the beam,” which makes for a pleasant, fast voyage across the bay’s northern reaches. With no fog, there was much to see: Woody Island to the north, Merasheen Island to the south, Long Island with Spencer’s Cove to the east and, of course, Bar Haven drawing nearer to the west.

Staragan’s arrival almost precisely matched the ETA Bar Haven that I had reported to Placentia Traffic, but bringing Staragan to the dock in winds that had strengthened throughout the day proved quite a chore. The north wind that had been so helpful during my passage was now working hard to blow Staragan off the dock. I had just decided to abandon my docking attempts and drop anchor when a gentleman suddenly appeared offering assistance. He adeptly caught Staragan’s lines and skillfully tied them to the dock. Within minutes I was reporting Staragan’s arrival to Placentia Traffic.

I had finally reached Bar Haven. I was safely secured. And I now had a shorter bucket list.

Ralph Morris, I soon learned, was the provider of the very welcome docking assistance. He was a former resident of Bar Haven and now, along with his wife Hilda, was part of what I would come to realize was a vibrant and lively seasonal community. Ralph spent over an hour talking with me about Bar Haven’s past as a prominent fishing town and its present as a community of summer homes and small scale fishing premises. We were soon joined by others, one of whom I was surprised and pleased to discover was a member of the family who had once lived next door to mine.

The next morning brought a southwesterly wind, but its unwelcome companion - fog - stayed away, giving me a glorious day of warmth and sunshine.

A maze of trails, following the roadways of the island’s former communities, led away from the harbour: northward to The Flats, southward to Western Cove, across The Neck and northward to Tobins Point, or southward to James Point. I spent the day exploring the trails, wandering about the community and chatting with residents. Emmett Morris gave me a tour of his cleverly rigged power plant and showed me the soaring vaulted ceilings in what he called his “cabin.” Ralph and Hilda Morris made me welcome at their summer home, a substantial travel trailer (whose placement on the island was a story in itself and one for another time).

In conversation with Ralph, Hilda and others, I learned of the efforts of Bar Havians to defy the fateful oblivion awaiting many resettled communities, efforts firmly in evidence throughout the settlement: a recently constructed community centre; signage for the Bar Haven Heritage Society, incorporated to hold community assets (docks, moorings, the community centre etc.) and facilitate fundraising activities; and a sturdy plaque boldly proclaiming to “preserve the name of the settlement.” Ralph related how the community’s part-time residents and friends added new meaning to the word “seasonal” in 2012, when 19 individuals celebrated Christmas in Bar Haven. And there’s more to come, with planning underway to commemorate in 2016 the 50th anniversary of the community’s 1966 resettlement.

My time to depart came much too soon. A contingent of individuals came by to see Staragan off. Along with a generous supply of Hilda’s tea buns came best wishes for a safe trip and invitations to come again, stay longer and attend the 2016 celebrations.  While returning farewells as Staragan pulled away, my bittersweet feelings of finally visiting and now leaving Bar Haven gave way to the work of single-handing a sailboat.  So, it was first things first: “Placentia Traffic, this is Staragan departing Bar Haven, bound for…” - Story and photos by Jim Wyse 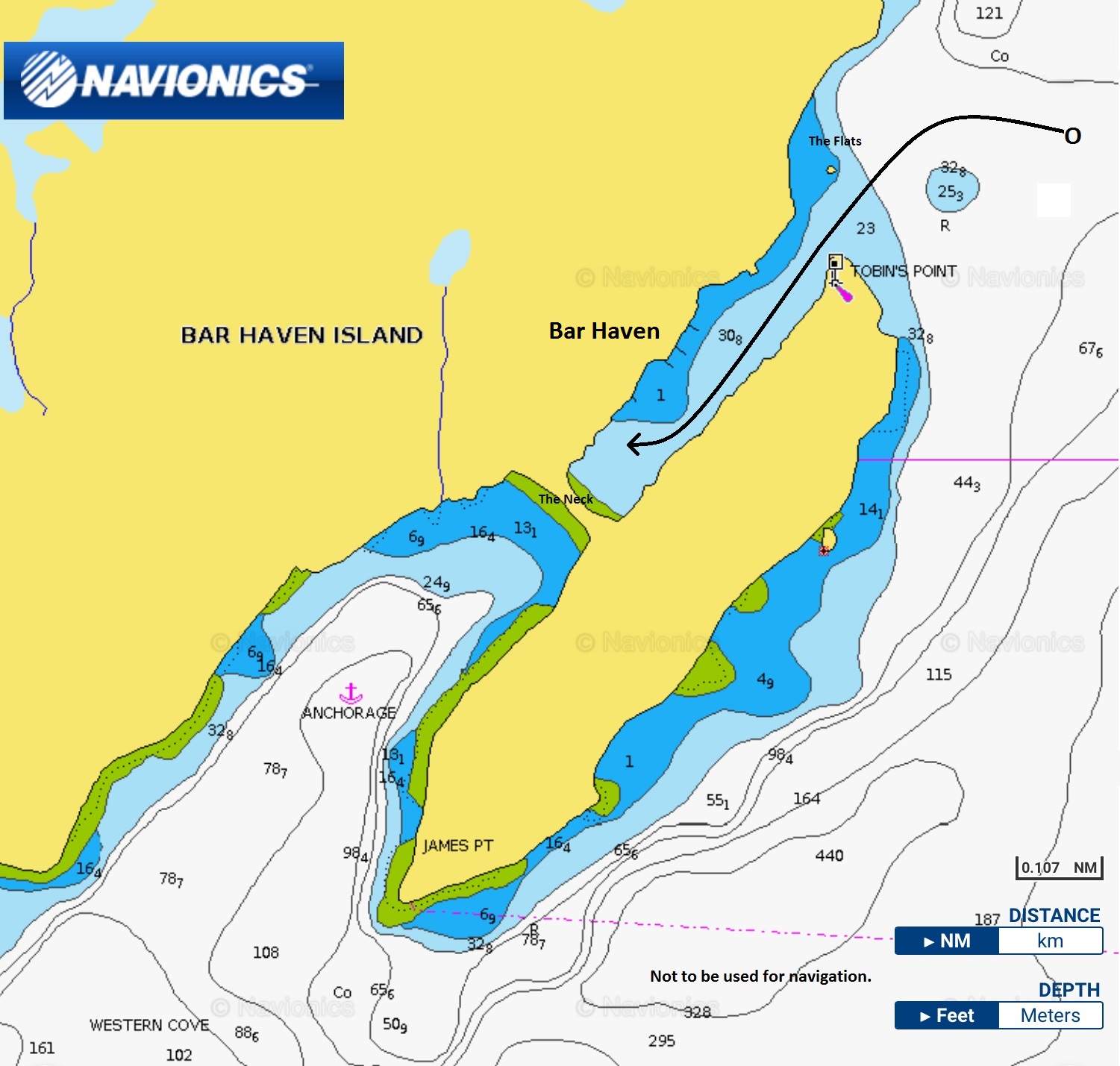 Harbour Entry:  The approach to Bar Haven includes designated anchorages for very large vessels.  Mariners navigating in the area are advised to proceed with extreme care when visibility is reduced.  Contacting Placentia Traffic on VHF channel 12 to report passage intentions and obtain advice on both anchored and moving vessels is strongly recommended.  Entering Bar Haven harbour takes a vessel north of Tobins Point and then southward into the harbour.  There are shoals and rocks off the harbour’s western shore that are only fully revealed at low tide.

Docking/Anchoring:  A floating dock is clearly prominent in the harbour’s southwestern corner and three community moorings may be found nearby.  A minimum depth of 12 feet may be found alongside the dock and 10 feet at the moorings.  Owned by the Bar Haven Heritage Society, the dock and moorings are available for use by visitors.  Vessels wishing to anchor will find good holding ground and lots of swinging room in the area south of The Neck.

Notes:  Good cell phone connectivity was available throughout the Bar Haven area.  Successful VHF ham radio contact was made with the Internet-linked repeater station VO1ARG (146.820MHz; -0.600MHz offset).  Although the Bar Haven Heritage Society levies no formal charge for its floating dock and moorings, donations to the Society are gratefully accepted.