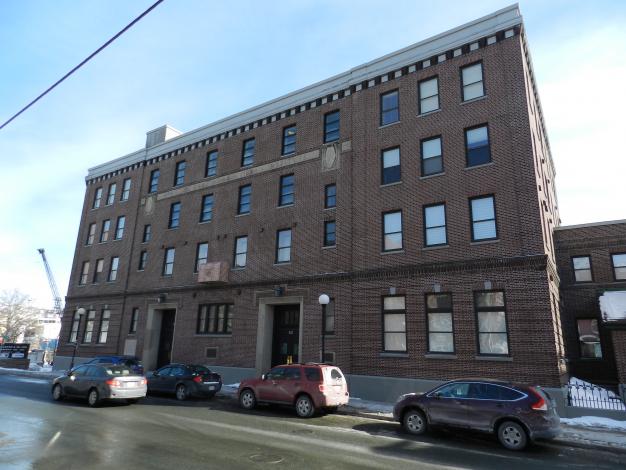 The King George V Institute at 93 Water Street in St. John’s could be Newfoundland and Labrador’s most fascinating building. Now the quiet home of condo development businesses, the building was proposed by Sir Wilfred Grenfell as a hostel for the hundreds and hundreds of foreign and local fishermen frequenting St. John’s harbour in the early 1900s. The building became a part of history from its very inception in 1911, when King George V used then-revolutionary technology to remotely lay the cornerstone from Buckingham Palace. The place then seemed to pop up, in one way or another, in almost every major Newfoundland event in the province’s early history.

It was alternately a home to sailors and outport girls in search of a warm bed and a safe space of their own; a resting place for victims of sealing disasters; a hospital for those stricken by the Spanish flu epidemic; a constant source of controversy and, eventually, a victim of the market crash in the 1930s. Too expensive to run and without a designated purpose, the once-grand Institute was, by the end of the 1930s, an empty shell of its former self taking up space on Water Street’s east end. (To read more about the fascinating early years of the King George V Institute, refer to part one of this story.)

Before the Second World War broke out in 1939, the Institute’s destitution was a microcosm of the larger, provincial picture. Newfoundland, already an impoverished place, was hit hard by the Depression, with roughly 15 per cent of the province’s able-bodied men being unemployed and countless families struggling to eke out some form of a living. But war, despite all its horrors, has always been a powerful economic engine, and the result of Britain’s involvement was a greatly increased need for men as both soldiers and workers. Rural Newfoundlanders swarmed to St. John’s to either enlist or sign up for the numerous jobs created to bolster the island’s defences and infrastructure in support of the war effort.

Preparing for War at Home

After advancing Nazi forces took France in June 1940 and the Battle of Britain began, the province suddenly changed from far-flung British colony to the potential frontline if the fighting continued to North America. Because of the island’s strategic position in the North Atlantic, Newfoundland became a hub of activity, housing British, Canadian and American troops and Allied workers, with the St. John’s area receiving a massive population influx. The problem then became obvious: if Newfoundland would be required to continue receiving thousands of Allied soldiers for the foreseeable future, Newfoundland would also be required to find somewhere to put them.

On October 2, 1940, the Canadian Legion and representatives from a host of local charities in the St. John’s area met at the Canada Club and formed the St. John’s War Services Association, in part to figure out the logistics of housing, feeding and entertaining swelling numbers of Allied troops. It was determined that the empty King George V Institute, still owned by the government, would be a perfect choice for a hostel, seeing as it had filled that exact role for fishermen and outport women only a few decades before. The government, informed of the proposal, was uninterested in simply donating the building. The Association then went about the tasks of raising the funds needed to renovate the place and hammering out an operating budget the government would accept. A deal was soon struck, and renovations began.

During this period, as the Nazis continued their invasion across Europe, Allied soldiers continued to pour into Newfoundland. Flights buzzed in and out of the airport at a constant pace, great ships filled to bursting came one after another into St. John’s harbour and offloaded their crew of Allied soldiers, the Americans set up shop in Argentia and made steady trips back and forth to the capital city. And then all those people needed defending. The province, and more particularly the city, bristled with Newfoundlanders, Americans, the British and all manner of people. Finally, on December 23, 1940, then-governor Walwyn officially opened the doors of the newly christened “Caribou Hut,” named in honour of the Royal Newfoundland Regiment, who had chosen the caribou as their emblem and who had suffered so greatly in their war only a few decades earlier. Newfoundland finally had a place to house at least some of the soldiers.

The Caribou Hut worked much the same way Sir Wilfred Grenfell’s Fisherman’s Institute did when it opened its doors in 1912. For a fair price, it provided soldiers with beds to sleep in, warm food to keep them healthy, a swimming pool, a bowling alley and a near-constant stream of entertainment to keep them in good spirits - everything from dances to movies to concerts. Goods and furniture had been donated from every corner of the province, and volunteers lined up to lend a helping hand.

As time went on and soldiers filtered in and out, either waiting for deployment or back on furlough, the Caribou Hut continued to grow. Originally, only three people were employed full-time, with volunteers tasked with helping fill the gaps. But the pace of work soon required that tiny workforce to grow to 33 full-time employees and even more volunteers. The 38 beds in 16 rooms were constantly full, with long lists of soldiers waiting. An average of 250 soldiers visited the canteen every day and more than 500 men came to the Hut to take advantage of its recreational and entertainment services. And demand continued to grow. For instance, contemporary records indicate the number of purchases from the canteen quadrupled between February and August 1941. And the original 38 beds soon grew to more than 250.

Though the soldiers did pay for their food, lodging and entertainment, the Hut’s management deliberately made the rates as reasonable as possible, while ensuring that each soldier got more than his money’s worth. Aside from the cheap goods, such as cigarettes, magazines and snack foods, soldiers were also offered a large number of programs designed to improve their physical and mental health. Sports leagues, classes, and even a program designed to pair a soldier with a companion or family in the city with whom they could converse and befriend to help relieve the stress of military service were all available free of charge. Accounting from the period shows that each soldier received 97 cents worth of goods and services for every dollar they spent.

On June 17, 1945, the Hut, which had been a home away from home to 122,704 Newfoundland, Canadian, British and American soldiers over four and a half years, finally closed its doors. Though much of the information regarding the Hut’s demographics and statistics can be found in records, the portrait of the Hut in its truest essence comes from Margaret Duley’s book The Caribou Hut: The Story of a Newfoundland Hostel, which was commissioned by the St. John’s War Services Association in 1949 to preserve the place in official history. She writes:

“What is there to say to all the visitors who came, now scattered as far as land lies and sea rolls? What is there to say to the St. John’s War Services Association now going into voluntary liquidation, to the volunteer, to every Newfoundlander now moving off from an old heritage? Only this - that we will remember all that is good in the past, but we will anticipate the good in the future too. But now we pause to salute the old days - the seasoned things - the efforts we know.” - By Grant Loveys