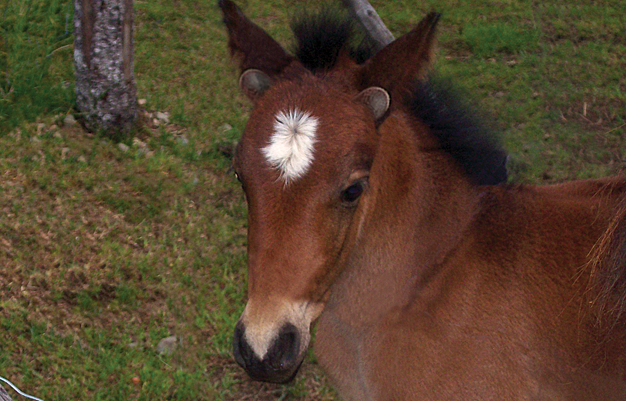 When a bull moose made its way to Change Islands late last winter, likely walking over the ice, locals could not have predicted the downright bizarre consequences. The animal was spotted by several residents for a couple of months but hasn’t been seen since last April. One particularly strange sighting of the wild animal occurred at the Newfoundland Pony Sanctuary. Speaking over the phone from his home in Change Islands, Joe King, the Sanctuary’s barn manager, says it’s still hard for him to believe what he witnessed.

“One day around suppertime I glanced over at the ponies’ pasture and here was this moose running around, chasing our ponies in their fenced pasture. All the ponies, they looked terrified - except for Nellie-Bell. She just stood there watching the moose, looking a bit confused or something. And anyway, next thing I know, the pair of them are - you know,” says Joe, laughing. “Let’s just say that Nellie-Bell did the trot of shame back to the barn that night.”

Joe might be having a chuckle over it all now, but at the time he says he was concerned about Nellie-Bell’s safety around the wild animal. He says the thought of hybrid offspring, however, never crossed his mind. It wasn’t until Nellie-Bell gave birth in early March that Joe became suspicious.

While making his regular feed rounds on the morning of March 1, Joe says he came upon Nellie-Bell in her stall, standing protectively over her newly born foal. Joe says he immediately approached the foal - a colt - to make sure he was healthy.

“He seemed fine, health-wise. I noticed right away that his legs were quite a bit longer than what we normally see in our foals, but I didn’t really think too much of that initially,” says Joe. It was what Joe saw next that startled him. “It looked to me like maybe there was something wrong with his head, some sort of a growth or something, on either side of his head.”

Joe immediately contacted the Department of Wildlife. A wildlife officer visited the following day, but Joe says he couldn’t explain the strange lumps.

Still concerned, Joe contacted large animal veterinarian Dr. Prail Olof in St. John’s, who requested a blood sample from the foal. Dr. Olof says what he saw under the microscope was something he’d never seen before.

“It was immediately very clear to me that this animal was carrying genetic material from a Newfoundland pony and genetic material from a moose,” says Dr. Olof, adding he believes the “growths” on the animal’s head to be the beginnings of antlers. “While there have been many instances of mating between moose and horses around the world, offspring resulting from these unions generally expire in utero due to chromosomal abnormalities. The fact that this foal was born alive - and healthy - is indeed incredible news for the world of science.”

And the news has certainly spread quickly. Joe says already the San Diego Zoo in California, USA has expressed interest in displaying the odd creature at its facility. And most recently, a five-star restaurant in Paris, France has offered the Newfoundland Pony Sanctuary an undisclosed amount of money to procure the foal/calf, which it plans to serve at an annual foodie event that celebrates exotic edibles from around the world.

The Sanctuary has declined both offers, preferring to keep the “Newfoundland Mony” in the hopes that it may attract more tourists to Change Islands.

“Our main priority here at the sanctuary is, of course, protecting the endangered Newfoundland Pony breed,” says Joe. “Dr. Olof assured us that hybrids like this are almost always sterile, so we aren’t worried about the gene pool getting disrupted or anything.”

The only thing left to decide now is a name for the Sanctuary’s newest addition.

“So far the kids in the area have just been calling him ‘Freak Show.’ But I don’t think that’s an appropriate name at all. Surely, we can come up with something better than that,” says Joe. “Me, I’m partial to calling him ‘April Fool.’” (Gotcha!)