Newfoundland and Labrador in the winter, with its large swaths of undeveloped land and varied terrain, becomes a snowy playground beckoning adventurous travellers. See the January 2015 issue of Downhome for awesome ski trails, outdoor skating facilities and snowshoe-only routes. Below, board members of the Newfoundland and Labrador Snowmobile Federation (NLSF) share their favourite trails.

I have two favourite trails in the western region, maintained by the Western Snoriders Snowmobile Club in Corner Brook.

The first trail, between Deer Lake and Corner Brook, is good for the novice or beginner, but enjoyed by the experienced snowmobiler as well. This trail is special to me because I live in Pasadena and I operate the groomer on this trail. I never get tired of the beauty of nature on this ride. It’s not unusual to see moose tracks, rabbits and a grouse or two. The trail is approximately 90 kilometres one way, about a four-hour ride. A return trip will be double that. This trail passes near Pasadena, where you can fill up on gas, coffee and meals. Just west of Pasadena is a warm up shelter, “Camp Chill-Out.” About halfway between Corner Brook and Pasadena you can take a short side-trip to Steady Brook, home of spectacular Marble Mountain and several rest stops for food, warmth and gas. Overall, this excursion takes you on a twisting, turning, tall tree-lined trail, over rolling hills, along valleys, brooks, and even on exposed mountains tops - the views are breathtaking. Tip: For a shorter return trip, depart from and return to Pasadena, which is about midway. A night ride over this trail is also exciting and enjoyable. 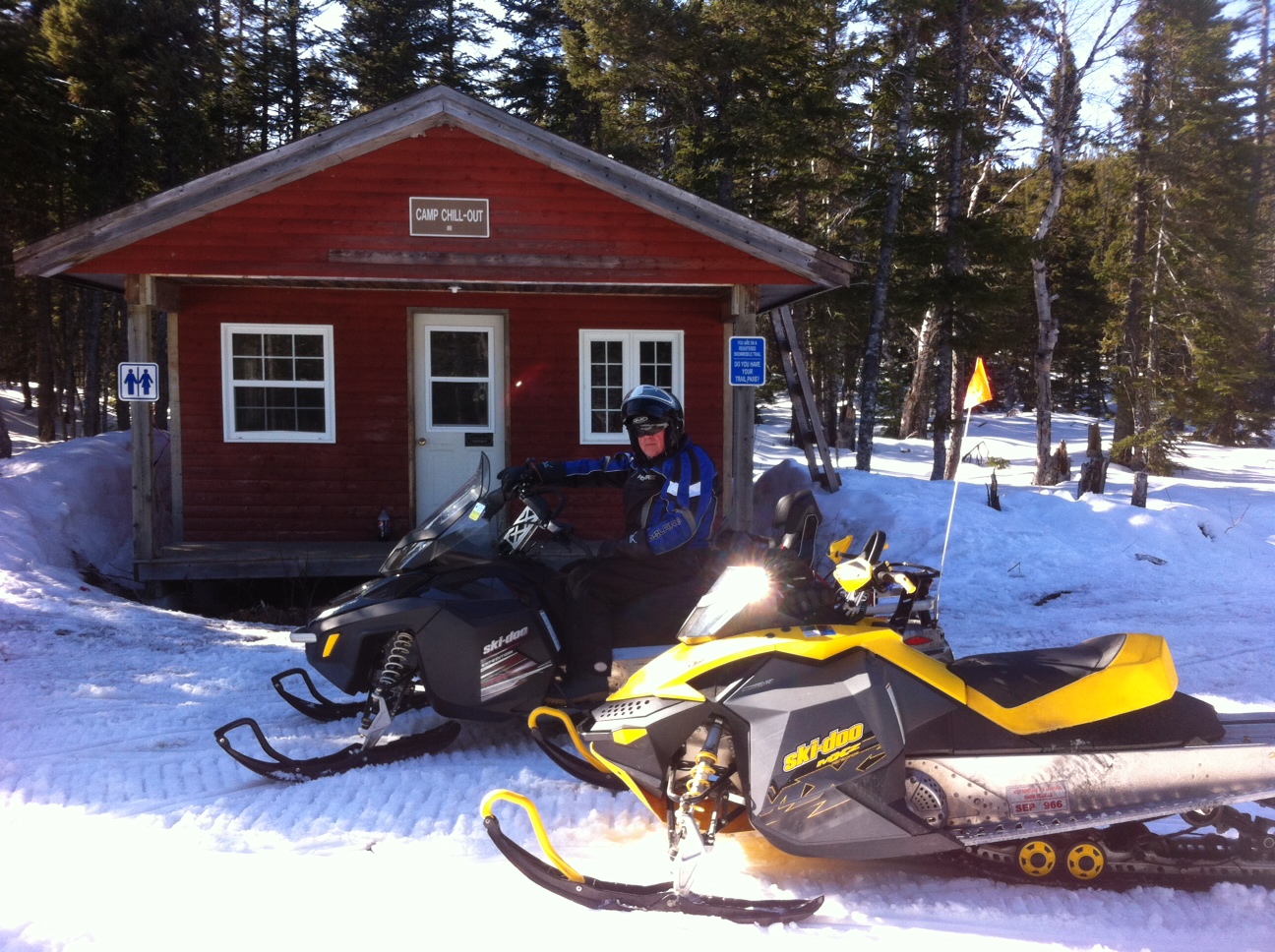 My other favourite trail is in the Goose Arm area between Hughes Brook and the North Arm Hills, known as the Kennedy Lake Trail. This adventurous trail for more experienced snowmobilers includes high-marking mountain slopes on a longer, remote ride. There are no services along the trail, but there is a warm-up shelter at the 40-km mark. The trail is about 120 km return, plus side excursions including the Bowl (for high-marking mountain slopes) or the Lomond Sinkhole. You can also experience sights in Gros Morne National Park such as Overfalls Brook Falls and Trout River Inner Pond Gorge. The Bowl and Overfalls Brook Falls are off the groomed trail and not well marked. A guide is recommended for the new comer in this area. - Robert Piercey

One of my favourite trails is in the Bay St. George Snowmobile Club’s area, known as 38 Trail. It is so named because years ago, in the early 1950s when Bowater’s logged this area, it was known as their “Camp 38.” The trail begins in the community of Cold Brook, where the club has a staging area. It’s a winding trail of 40 kilometres to the community of Gallants. The trail starts off on a wide woods road, crosses several bog areas and finishes off with one of the most scenic trails anywhere. When there is lots of snow, and there usually is, the overhang of snow-covered trees makes it seem like you are travelling though a tunnel. Halfway down the trail you come to a warm-up shelter, a common stop to get warm and feed the jays. After another 20 kms of beautiful trail you arrive at the community of Gallants, where you can find a little grub at the local convenience store and restaurant before heading home. It’s an excellent drive on a sunny afternoon. - Kevin Sweetland 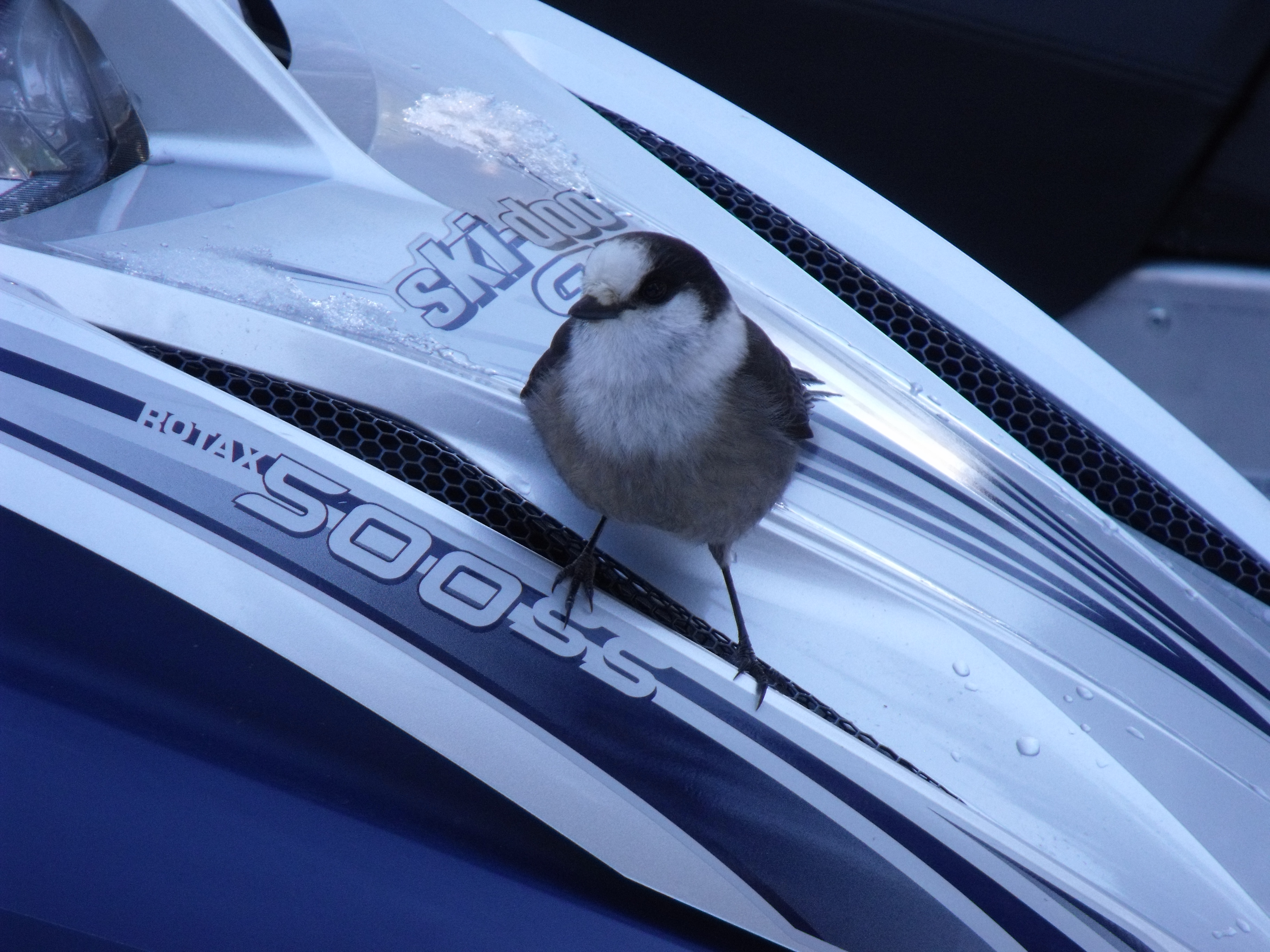 Tour of the Tip

My favourite trail and snowmobile ride has to be the “Tour of the Tip,” where riders gather in St. Anthony and, after a hearty breakfast at the Grenfell Interpretation Centre, take off to visit the many communities that dot the coastline of the northern tip of the Great Northern Peninsula. Some of the route follows the NLSF groomed trail, while other sections trace the traditional trails used by Dr. Grenfell, the mail carriers, the Newfoundland Rangers and locals. They all used dog teams to haul provisions and firewood from the main centre at St. Anthony to the outports. Normally this ride takes place early March, ensuring the best snow conditions. 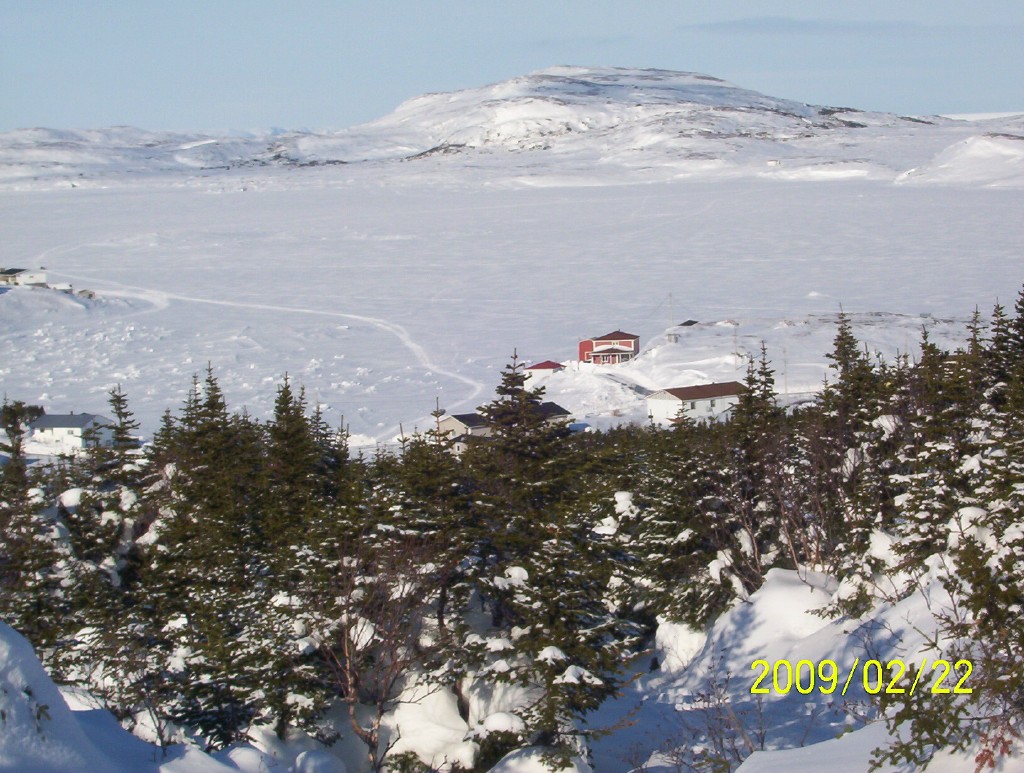 From St. Anthony it’s a short hop to St. Anthony Bight, Great Brehat and St. Carols, riding alongside the ocean and the vast expanse of pack ice drifting south. It is then across the traditional trail to connect to the NLSF trail leading into St Lunaire-Griquet. The trail passes through Gunners Cove, Straitsview and Noddy Bay. At Straitsview, there’s a stop for lunch at Skipper Hots Lounge or the local fire department. And here riders are broken into smaller groups. Competent local guides take the groups across the sea ice at Quirpon Run over to Quirpon Island and northward to the most northerly tip of the island of Newfoundland, Cape Bauld. Riders stop at the lighthouse to gaze over the Strait of Belle Isle. Labrador appears so close on a fine, sunny day. This time of year, thousands of harp seals are riding the ice pack along with their young whitecoats and are within a couple hundred metres of your feet! Also visible from here are majestic icebergs, eider ducks and even the occasional polar bear. 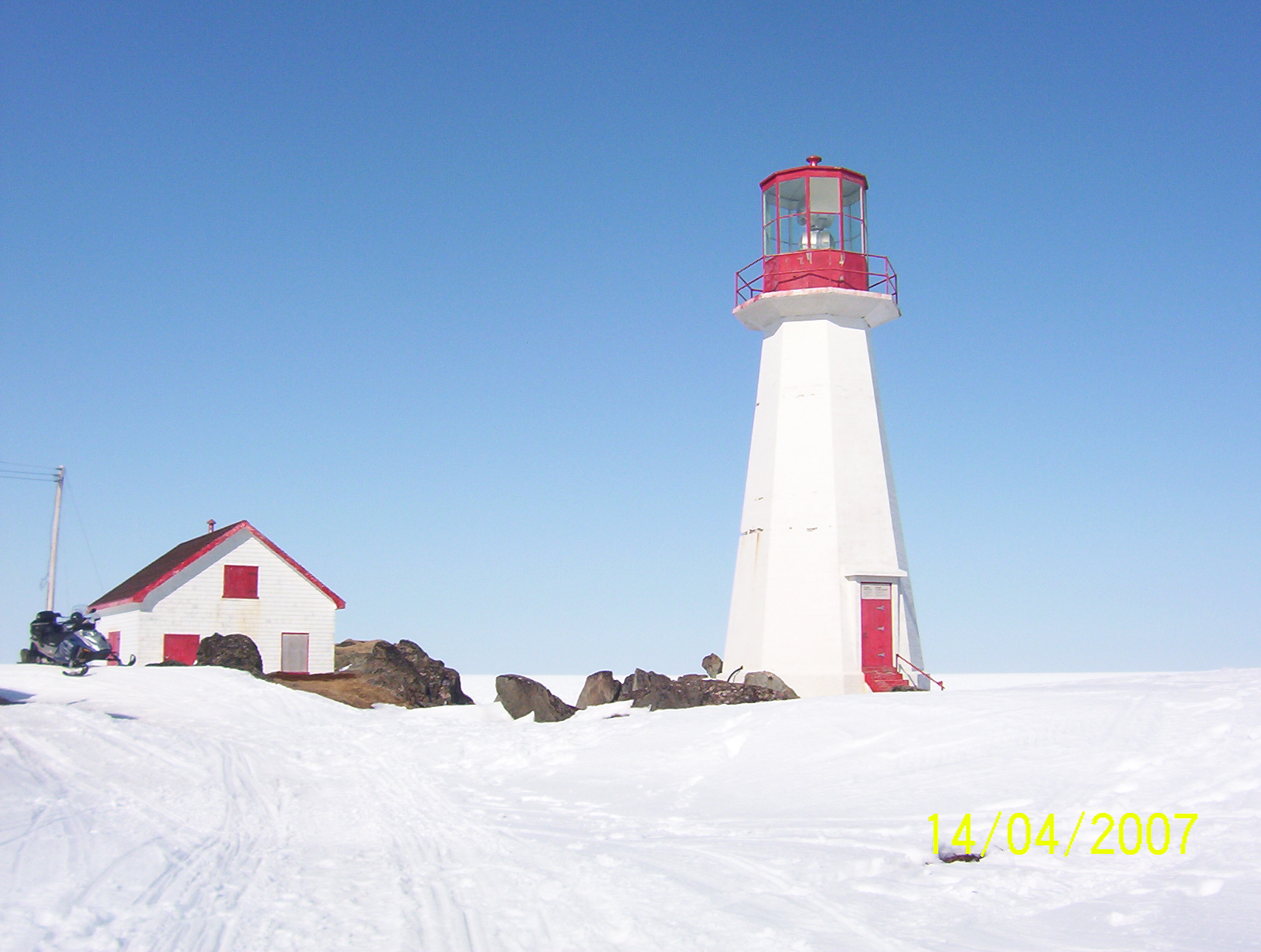 The return trip goes back across the tickle to Straitsview for a fuel top-up and a coffee before heading over the open barrens to Cape Onion, Ship Cove and Raleigh. Next riders cross the sea ice of Pistolet Bay and reconnect with the NLSF trail to St Anthony, where a hot meal is waiting. A great way to end a spectacular day in the open air and bright sunshine. - Terry G. Simms

If you told me I could have snow on the ground for only one weekend in Central Newfoundland this winter and asked where I would go, two trips stand out and both are totally different:

My first scenario starts with friends at a cottage in Terra Nova. Early in the morning, we head west on the groomed T’Railway. The need for fuel necessitates our departure from the T-Railway at the Glovertown Exit near Maccles Lake. An hour later, after filling up on gas, snacks and coffee, it’s back on the trail and rolling into Gambo.

The half-hour ride from Gambo to Benton passes quickly and suddenly, Gander Airport appears on your left. The trail goes through Gander and continues west to Glenwood, where you can refill on coffee and gas. Next stop, Mount Peyton.

There are numerous routes to Mount Peyton, but the ride in from the Indian Arm Pond intersection near Lewisporte affords the best experience. Before leaving the T-Railway, take a brief side-trip to Frog Rock for a mandatory photo-op. From there it’s back to the intersection, across the highway and into the Birches. The birch-lined trail from the highway to Mount Peyton is phenomenal, winding its way to Clayton’s Chalet at the base of the mountain. At any time during the season you can expect from 10 to 50 sleds at Clayton’s Chalet warming shelter.

Access to the summit base is from the southwest side. It can be an interesting ascent when riding two-up, but it is a worthwhile event. The view is spectacular in all directions, and I would imagine at night it would be more so. Depending on the wind and temperature, you can hike to the summit or beat a hasty retreat to the warmth of Clayton’s Chalet. From there it’s all downhill, pardon the pun, returning back to Frog Rock and a ride to Lewisporte. Heading east for home, you can ride the power line and pick up the T-Railway just west of the Glenwood overpass. You may want another stop in Gander for fuel or refreshments. Most fast food outlets, family and specialty restaurants are accessible by snowmobile and are clearly marked by the signage posted by the Gander Snowmobile Club. With darkness approaching, the ride back home will bring to a close a very satisfying fun-filled day with friends and family.

Each year the NLSF holds an event called Rendezvous, hosted by a different club each time. It normally consists of a meet-and-greet, trail ride, and dinner and dance. The last event, hosted by the Dorset club in Baie Verte, stands out as one of my most memorable trail rides.

It may have been the immaculately groomed trail, crisp cold air on the sunny morning or the company we were keeping, but it was to be one for the books. The route took us on a loop out of Baie Verte on to Middle Arm, Burlington and back. After climbing out of Baie Verte, the trail turns off before Flat Water Pond and heads into Middle Arm. The trail is reminiscent of Trail 38 in the Bay St. George area, as it winds its way down a long valley surrounded by snow-covered, overhanging fir trees and providing the occasional glimpse of the fiord snaking in from the ocean. After an outstanding lunch at Middle Pond, it’s back on the trail to Burlington. After leaving Burlington, on the last leg of the loop, the trail runs through a forest and opens on a large barren before connecting with the trail to Baie Verte near Flat Water Pond. Though not a long loop, the scenery made it all worthwhile. And since then, a new trail to La Scie has been added to the loop. - Clarence Sweetapple