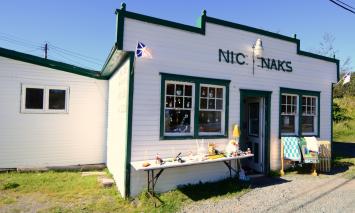 In the November 2014 issue of Downhome, Shannon Duff and Dennis Flynn speak to the fine folks behind some of Newfoundland and Labrador's longest running businesses. Here they share the stories of two more experienced retailers.

Lorraine Welsh, proprietor of Nic Naks store in Green's Harbour, Trinity Bay, says with a smile, "The building is approximately 100 years old and the original owner was a Mr. Harry Green. He was a general merchant and you could find everything you needed to run the fishery or a home here. Mr. Green went teaching for a year or so after he finished school, but decided he wanted to be in business for himself so he returned home and opened his store. It flourished and at one point he had over 200 people 'on his books' (an old-fashioned way of saying customers) and it would take him two full days just to deliver groceries around the area. He stayed open for around 60 years and my mother actually worked here for over 20 years helping in the shop."

The next owner, Bill Green, operated a grocery store in this building for another 20 years after that. When he retired, the building was vacant for about a year when Lorraine entered a rent to own arrangement with him and she's been in business for almost 18 years now. Her shop is filled with quite the assortment of goods, from beautiful replica dories, ships in glass bottles and knit goods to a large assortment of quilts that share shelf space with eclectic antiques (including vintage stereoscope viewers).

"I love it," she says. "It is mostly seasonal, but I have been here since the 'year of the tow out' (a local expression for the 1997 move of the Hibernia Gravity Base Structure from the construction site at Bull Arm to the offshore oil fields) and the people are wonderful. I have a niche specializing in the high quality local craft industry and we see people from all over the world. I have had folks from Egypt, Australia, New Zealand, Russia and everywhere really. We have even had a few famous visitors including Shaun Majumder (of "This Hour Has 22 Minutes" and "Majumder Manor") and he was really nice."- Dennis Flynn

Many of the smaller markets from our grandparents' days are long gone, but there are a few that have held their own and weathered the storm in this ever-changing globalized, digital marketplace with its big box stores. One of those mainstays is the family-owned Coleman's Group of Companies, owned today by Frank Coleman, a third-generation Coleman businessman. Coleman's is now the largest, fully integrated, independent wholesale/retail food operation in Atlantic Canada. Its beginnings were much humbler.

Arthur James Coleman and his wife Maggie first opened for business in 1934 in a former school house in Corner Brook. It was a family operation in every sense. As soon as the Coleman children were old enough they were put to work in the store, as were subsequent Coleman descendants. "It was always a business where you had to work hard, specifically in the food business because it was so demanding every day," Frank told Downhome in a past interview. "My brothers and cousins and I did a little bit of everything."

the years, the Coleman's enterprise has really branched out with 12 food stores, four furniture stores and two clothing stores operating from Port aux Basques to St. John's. Frank says the company has a unique relationship with its customers and it's one of the reasons they keep coming back. "It's people that we work with and people that we serve that have a shared group of customs and expectations, and we treat them that way, and I think they feel that way when they come into our business. It's a very unique place that we occupy in the minds of the consumer, and it's a place that we work very hard to maintain." With a fourth generation employed in the company, it's likely Coleman's will remain a hallmark of the food industry in this province. -- Shannon Duff

This looks like the same store that was in an old picture in the video 'Drift back in time' a really nice song and slideshow by Peter Jacobs.