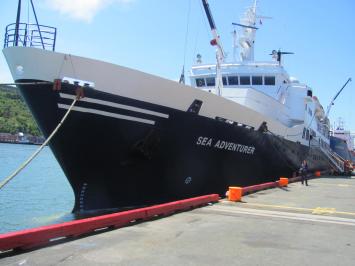 The Sea Adventurer in St. John's
Adventure Canada, an expedition cruise line that's been bringing passengers to Newfoundland and Labrador for two decades, has perfected many aspects of the cruise experience. One is the wake-up call.

No, it's not a monotone voice on the other end of the phone gently nudging you from your cabin. At least on the morning this Downhome editor was aboard the Sea Adventurer, it's the booming voice of the captain over the PA, announcing to passengers that the ship is sailing past a pod of orcas. I've never witnessed so many people (myself included) so eager to rise from slumber at 6 a.m. Sure enough, reaching the top deck I could just make out the black dorsal fins in the distance.

Downhome, as well as other media and tourism industry staff, was invited aboard the Sea Adventurer in late June for a special one-night sailing from St. John's, Newfoundland to St. Pierre, France, in celebration of the company's 20th year bringing cruise tourists to the province.

Others along for the ride include Newfoundland author Kevin Major, local storyteller Dave Paddon and a host of other famous faces from home. But this isn't their first (and won't be their last) Adventure Canada cruise. They are members of the company's stellar resource team - typically locals with some area of expertise - who sail with cruise passengers to add that extra ounce of local knowledge and charm.

"For our guests it makes it very real. It's not just the tour guide spiel," Adventure Canada vice president Cedar Swan, a B.C. native now living in Ontario, tells me as we sail. "They're actually getting the perspective of somebody that lives there, the pros and cons and the real-life situations, and I think that's what people have come to know us for is for providing that type of insight."

Food & fun
Throughout the journey I keep thinking that as we all filed onto the ship we must have looked like hungry souls, for they keep feeding us - and feeding us and feeding us. From hors d'oeuvres aplenty and a gigantic barbecue buffet on deck to a gourmet meal in the dining room, it's a wonder the ship didn't sink like a stone with all of us on it. (Still, I would have made off with the entire dessert buffet if I thought I could have done so without creating a scene.)

Canada's literary queen, Margaret Atwood (another fixture on Adventure Canada's resource team), is also on this trip. Shortly after we're out to sea, the three wordsmiths - Paddon, Major and Atwood - go head to head in a game of "Nautical Bluff" in the ship's lounge, which leaves everyone in stitches.

Late into the evening we're treated to musical performances from talented members of the ship's crew (which includes a saxophone-playing horse - seriously, I couldn't make this up if I tried) as well as Juno-nominated Tom Barlow.

In the morning, as if on cue, humpbacks greet the ship upon our entrance into St. Pierre Harbour (perhaps the 6 a.m. orcas notified them of our impending arrival).

Canada, and especially our little corner of it, is indeed an adventure - one that's best appreciated from the water. Next time I'm planning a cruise vacation, I might just consider sticking a little closer to home. - Ashley Colombe

Click here to view a slideshow of photos from the cruise.